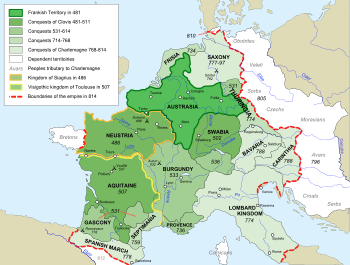 Neustria (within the Kingdom of Siagrius, outlined in orange), in the context of the Franks

Neustria (/ˈnuːstriə, ˈnjuː-/) or Neustrasia (meaning "new [western] land" in contrast to Austrasia) was the western part of the kingdom of the Franks[1] that was created in 511 upon the division of the Merovingian kingdom of Clovis I to his four sons following his death.

Neustria was made up of the regions between Aquitaine and the English Channel, approximately the north of present-day France, with Paris and Soissons as its main cities. It later referred to the region between the Seine and the Loire rivers known as the regnum Neustriae, a constituent subkingdom of the Carolingian Empire and then West Francia. The Carolingian kings also created a March of Neustria which was a frontier duchy against the Bretons and Vikings that lasted until the Capetian monarchy in the late 10th century, when the term was eclipsed as a European political or geographical term.

Neustria was also employed as a term for northwestern Italy during the period of Lombard domination. It was contrasted with the northeast, which was called Austrasia, the same term as given to eastern Francia.

Constant re-divisions of territories by Clovis's descendants resulted in many rivalries that, for more than two hundred years, kept Neustria in almost constant warfare with Austrasia, the eastern portion of the Frankish kingdom.

Despite the wars, Neustria and Austrasia re-united briefly on several occasions, the first time under Clotaire I during his reign from 558 to 562. The struggle for power continued with Queen Fredegund of Neustria (the widow of King Chilperic I (reigned 566-584) and the mother of the new king Clotaire II (reigned 584-628)) unleashing a bitter war.

After his mother's death and burial in Saint Denis Basilica near Paris (597), Clotaire II continued the struggle against Queen Brunhilda, and finally triumphed in 613 when Brunhilda's followers betrayed the old queen into his hands. Clotaire had Brunhilda put to the rack and stretched for three days, then chained between four horses and eventually ripped limb from limb. Clotaire now ruled a united realm, but only for a short time as he made his son Dagobert I king of Austrasia. Dagobert's accession in Neustria resulted in another temporary unification.

When in Austrasia, the Arnulfing mayor Grimoald the Elder attempted a coup against his liege, Clovis II had him removed and again reunited the kingdom from Neustria, but again temporarily. During or soon after the reign of Clovis's son Chlothar III, the dynasty of Neustria, like that of Austrasia before it, ceded authority to its own mayor of the palace.

In 678, Neustria, under mayor Ebroin, subdued the Austrasians for the last time. Ebroin was murdered in 681. In 687, Pippin of Herstal, mayor of the palace of the king of Austrasia, defeated the Neustrians at Tertry, uniting Austrasia and Neustria from the other side. The writers who lived in Austrasia proved more loyal to their mayor.

Pippin's descendants, the Carolingians, continued to rule the two realms as mayors. With Pope Stephen II's blessing, after 751 the Carolingian Pippin the Short, formally deposed the Merovingians and took control of the empire, he and his descendants ruling as kings.

Neustria, Austrasia, and Burgundy then became united under one authority and the names "Neustria" and "Austrasia" gradually disappeared.

In 748, the brothers Pepin the Short and Carloman gave their younger brother Grifo twelve counties in Neustria centred on that of Le Mans. This polity was termed the ducatus Cenomannicus, or Duchy of Maine, and this was an alternative name for the regnum of Neustria well into the 9th century.

The term "Neustria" took on the meaning of "land between the Seine and Loire" when it was given as a regnum (kingdom) by Charlemagne to his second son, Charles the Younger, in 790. At this time, the chief city of the kingdom appears to be Le Mans, where the royal court of Charles was established. Under the Carolingian dynasty, the chief duty of the Neustrian king was to defend the sovereignty of the Franks over the Bretons.

In 817, Louis the Pious granted Neustria to his eldest son Lothair I, but following his rebellion in 831, he gave it to Pepin I of Aquitaine, and following the latter's death in 838, to Charles the Bald. Neustria, along with Aquitaine, formed the major part of Charles West Frankish kingdom carved out of the Empire by the Treaty of Verdun (843). Charles continued the tradition of appointing an elder son to reign in Neustria with his own court at Le Mans when he made Louis the Stammerer king in 856. Louis married the daughter of the King of Brittany, Erispoe, and received the regnum from the Breton monarch with the consent of the Frankish magnates. This unique relationship for Neustria stressed how it had shrunk in size to definitely exclude the Île de France and Paris by this time, as it was distanced from the central authority of Charles the Bald and closer to that of Erispoe. Louis was the last Frankish monarch to be appointed to Neustria by his father and the practice of creating subkingdoms for sons waned among the later Carolings.

In 861, the Carolingian king Charles the Bald created the Marches of Neustria that were ruled by officials appointed by the crown, known as wardens, prefects or margraves. Originally, there were two marches, one against the Bretons and one against the Norsemen, often called the Breton March and Norman March respectively.

In 911, Robert I of France became margrave of both Marches and took the title demarchus. His family, the later Capetians, ruled the whole of Neustria until 987, when Hugh Capet was elected to the kingship. The subsidiary counts of Neustria had exceeded the margrave in power by that time and the peak of Viking and Breton raiding had passed. After the Capetian Miracle, no further margraves were appointed and "Neustria" was eclipsed as a European political term (present, however, in some Anglo-Norman chronicles and revived as synonymous with English possession of Normandy under Henry V by the St. Albans chronicler Thomas Walsingham in his Ypodigma Neustriae).

The precise division of Francia into a Neustrian, Austrasian, and Burgundian kingdom dates only from the late 6th century, so earlier kings who ruled from Soissons or Paris are here excluded.

Mayors of the palace

These were the chief officers of the kings and gradually became the de facto rulers in the name of the kings.

Louis was chased from Le Mans in 858 following the assassination of Erispoe in November 857.

Only those who ruled a united Neustrian march are included, though the title "of Neustria" was carried by the earlier margraves of the Breton and Norman marches, the most notable by Robert the Strong, ancestor of these later Capetians.

The chief contemporary chronicle written from a Neustrian perspective is the Liber Historiae Francorum.[2]