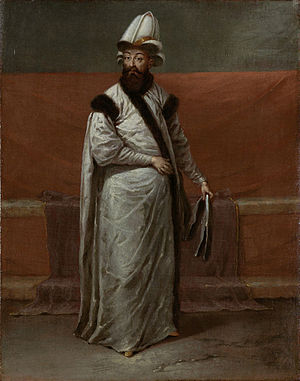 Nevşehirli Damat Ibrahim Pasha (1666 – October 16, 1730) served as Grand Vizier for Sultan Ahmed III of the Ottoman Empire during the Tulip period. He was also the head of a ruling family which had great influence in the court of Ahmed III. The epithet "Nevşehirli" (meaning "from Nevşehir") is used to distinguish this Grand Vizier from another, Damat Ibrahim Pasha (died 1601).

The abilities of Ibrahim, who directed the government from 1718 to 1730, preserved an unusual internal peace in the empire, though the frontier provinces were often the scenes of disorder and revolt. This was repeatedly the case in Egypt and Arabia, and still more frequently in the districts northward and eastward of the Black Sea, especially among the fierce Noghai tribes of the Kuban. The state of the countries between the Black Sea and the Caspian Sea was rendered still more unstable by the rival claims of Russia and the Porte; it was difficult to define a boundary between the two empires in pursuance of the partition treaty of 1723. The Tulip period, called Lâle Devri (the Tulip epoch) was a time of extravagant garden parties and sumptuous entertainment. In 1730, when Tahmasp II of Persia attacked Ottoman possessions, the empire's leadership was caught unprepared. Infuriated by the Ibrahim Pasha's apparent indifference to state affairs and by the sultan’s life of inordinate luxury—‘which was rendered the more distasteful to his subjects by its faintly European flavor’—and by his hesitation in taking up the Persian challenge, the people and troops in Constantinople revolted. They were led by Patrona Halil, an ex-Janissary from Albania. Ahmed III sacrificed Ibrahim and other viziers to the mob in order to save himself.

The Mughal Emperor Farrukhsiyar, a grandson of Aurangzeb, is also known to have sent a letter to the Ottomans which was received by the Grand Vizier Ibrahim Pasha, providing a graphic description informing him of the efforts of the Mughal commander Syed Hassan Ali Khan Barha against the Rajput and Maratha rebellion.[1]

Ibrahim Pasha was married to the daughter of the sultan, Hatice Sultan, in 1717 when the Princess was fourteen years old and Ibrahim was fifty years old. This marriage into the Ottoman dynasty earned him the epithet "Damat" (Turkish: bridesgroom, son-in-law) They had two children.