Maskelyne was born in London, the third son of Edmund Maskelyne of Purton, Wiltshire. Maskelyne's father died when he was 12, leaving the family in reduced circumstances. Maskelyne attended Westminster School and was still a pupil there when his mother died in 1748. His interest in astronomy had begun while at Westminster School, shortly after the eclipse of 14 July 1748.[1]

Nevil Maskelyne is buried in the churchyard of St Mary the Virgin, the parish church of the village of Purton, Wiltshire, England.[4]

In 1760 the Royal Society appointed Maskelyne as an astronomer on one of their expeditions to observe the 1761 transit of Venus. He and Robert Waddington were sent to the island of St. Helena. This was an important observation since accurate measurements would allow the accurate calculation of Earth's distance from the Sun, which would in turn allow the actual rather than the relative scale of the solar system to be calculated. This would allow, it was argued, the production of more accurate astronomical tables, in particular those predicting the motion of the Moon.[5]

Bad weather prevented observation of the transit; however, Maskelyne used his journey to trial a method of determining longitude using the position of the moon, which became known as the lunar distance method.[6] He returned to England, resuming his position as curate at Chipping Barnet in 1761, and began work on a book, publishing the lunar-distance method of longitude calculation and providing tables to facilitate its use in 1763 in The British Mariner's Guide, which included the suggestion that to facilitate the finding of longitude at sea, lunar distances should be calculated beforehand for each year and published in a form accessible to navigators.

In 1763 the Board of Longitude sent Maskelyne to Barbados in order to carry out an official trial of three contenders for a Longitude reward. He was to carry out observations on board ship and to calculate the longitude of the capital, Bridgetown by observation of Jupiter's satellites. The three methods on trial were John Harrison's sea watch (now known as H4), Tobias Mayer's lunar tables and a marine chair made by Christopher Irwin, intended to help observations of Jupiter's satellites on board ship. Both Harrison's watch and lunar-distance observations based on Mayer's lunar tables produced results within the terms of the Longitude Act, although the former appeared to be more accurate. Harrison's watch had produced Bridgetown's longitude with an error of less than ten miles, while the lunar-distance observations were accurate to within 30 nautical miles.

Maskelyne reported the results of the trial to the Board of Longitude on 9 February 1765.[7] On 26 February 1765 he had been appointed Astronomer Royal[1] following the unexpected death of Nathaniel Bliss in 1764; making him ex officio a Commissioner of Longitude. The Commissioners understood that the timekeeping and astronomical methods of finding longitude were complementary. The lunar-distance method could more quickly be rolled out, with Maskelyne's proposal that tables like those in his "The British Mariner's Guide" be published for each year. This proposal led to the establishment of The Nautical Almanac, the production of which, as Astronomer Royal, Maskelyne oversaw. Taking even occasional astronomical observations was also the only way to check that a timekeeper was keeping good time over the course of a long voyage. The Commissioners also needed to know that more than one sea watch could be made, and that Harrison's methods could be communicated to other watchmakers.[8]

The Board of Longitude therefore decided that rewards should be given Harrison (£10,000), Mayer (£3000, posthumously) and others involved in helping to develop the lunar-distance method.[9][10] Harrison was told that a further reward of £10,000 would be forthcoming if he could demonstrate the replicability of his watch. It is worth noting that although Harrison and his son later accused Maskelyne of bias against the timekeeping method, charges repeated by authors such as Dava Sobel and Rupert Gould, Maskelyne never submitted a method or an idea of his own for consideration by the Board of Longitude. He was to play a significant role in having marine timekeepers, as well as the lunar-distance method, developed, tested and used on board voyages of exploration.[1]

Since the observations that fed into the Nautical Almanac were made at the Royal Observatory, Greenwich, the Greenwich meridian became the reference for measurements of longitude in the Royal Navy, and on British Admiralty charts. It was recommended for adoption as the international Prime Meridian in 1884.[11][12]

Maskelyne took a great interest in various geodetical operations, notably the measurement of the length of a degree of latitude in Maryland and Pennsylvania,[13] executed by Mason and Dixon in 1766 – 1768, and later the determination of the relative longitude of Greenwich and Paris.[14] On the French side the work was conducted by Count Cassini, Legendre, and Méchain; on the English side by General Roy. This triangulation was the beginning of the great trigonometrical survey which was subsequently extended all over Britain. His observations appeared in four large folio volumes from 1776–1811, some of them being reprinted in Samuel Vince's Elements of Astronomy.[15]

In 1772 Maskelyne proposed to the Royal Society what was to become known as the Schiehallion experiment (named after the mountain on which it was performed), for the determination of the Earth’s density using a plumb line. He was not the first to suggest this, Pierre Bouguer and Charles-Marie de la Condamine having attempted the same experiment in 1738.

Maskelyne performed his experiment in 1774 on Schiehallion in Perthshire, Scotland,[16] the mountain being chosen due to its regular conical shape which permitted a reasonably accurate determination of its volume. The apparent difference of latitude between two stations on opposite sides of the mountain were compared with the real difference of latitude obtained by triangulation.

From Maskelyne’s observations Charles Hutton deduced a density for the earth 4.5 times that of water (the modern value is 5.515).

Maskelyne’s first contribution to astronomical literature was A Proposal for Discovering the Annual Parallax of Sirius, published in 1760.[17] Subsequent contributions to the Transactions contained his observations of the transits of Venus (1761 and 1769), on the tides at Saint Helena (1762), and on various astronomical phenomena at Saint Helena (1764) and at Barbados (1764).

Maskelyne also introduced several practical improvements, such as the measurement of time to tenths of a second and prevailed upon the government to replace Bird’s mural quadrant by a repeating circle 6 feet (1.8 m) in diameter. The new instrument was constructed by Edward Troughton but Maskelyne did not live to see it completed.

Maskelyne in literature and the arts 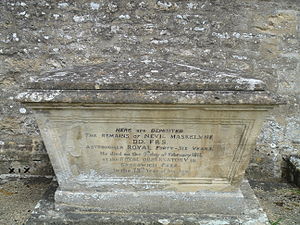