New Bern /ˈnuːbərn/ is a city in Craven County, North Carolina, United States. As of the 2010 census it had a population of 29,524,[4] which had risen to an estimated 30,242 as of 2013.[5] It is the county seat of Craven County and the principal city of the New Bern Metropolitan Statistical Area.

It is located at the confluence of the Trent and the Neuse rivers, near the North Carolina coast. It lies 112 miles (180 km) east of Raleigh, 87 miles (140 km) northeast of Wilmington, and 162 miles (261 km) south of Norfolk. New Bern is the birthplace of Pepsi Cola.

New Bern was settled in 1710 by Swiss and Palatine German immigrants. The new colonists named the settlement after Bern, the capital of Switzerland and hometown of their leader Christoph von Graffenried. The English connection with Switzerland had been established by some Marian exiles who sought refuge in Protestant parts of Switzerland. There were also marriages between the Royal House of Stuart and notable people in the history of Calvinism. The colonists later discovered they had started their settlement on the site of a former Tuscarora village named Chattoka. This caused conflicts with the Tuscaroras who were in the area.

New Bern is the second-oldest European-American colonial town in North Carolina (after Bath).[citation needed] It served as the capital of the North Carolina colonial government, then briefly as the state capital. After the American Revolution, New Bern became wealthy and quickly developed a rich cultural life. At one time New Bern was called "the Athens of the South,"[6] renowned for its Masonic Temple and Athens Theater. These are both still very active today.

New Bern has four historic districts listed on the National Register of Historic Places; their numerous contributing buildings include residences, stores and churches dating back to the early eighteenth century. Within easy walking distance of the waterfront are more than 164 homes and buildings listed on the National Register. Also nearby are several bed and breakfasts, hotels, restaurants, banks, antiques stores and specialty shops. The historic districts contain many of the city's 2,000 crape myrtles—its official flower—and developed gardens. New Bern has two "Local Historic Districts", a municipal zoning overlay that affords legal protection to the exteriors of New Bern's irreplaceable historic structures. These areas provide much of New Bern's unique charm, appeal to retirees and heritage tourism, and contribute to the city's economic success. The Local Historic Districts, while vitally important to New Bern, comprise only 2.43% of New Bern's 27-square-mile area. There is considerable area available for new development. 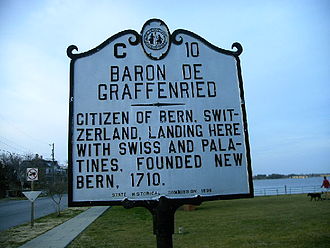 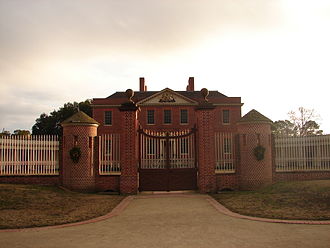 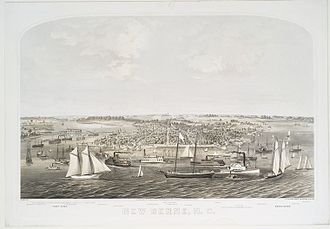 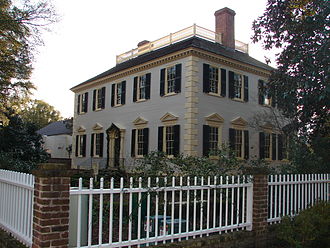 Varying complex cultures of indigenous peoples had lived along the waterways of North Carolina for thousands of years before Europeans explored the area. The Tuscarora, an Iroquoian-speaking people, had migrated south from the Great Lakes area in some ancient time and occupied this area for hundreds of years before any Europeans arrived. They had an ancient village, Chattoka, here at the confluence of the rivers. They resisted encroachment by the Europeans, rising up in resistance in 1712.

New Bern was first settled by Europeans in 1710 by Swiss and Palatine German immigrants[7] under the leadership of Christoph von Graffenried, Franz Louis Michel[8][9] and John Lawson. They named the settlement after Bern, von Graffenried's home town that would later become the capital of Switzerland. Von Graffenried had the original plat of the town laid out in the shape of a cross, though later development and additional streets have obscured this pattern within the regular street grid. This became the first permanent seat of the colonial government of North Carolina.

During the 19th-century Federal period, New Bern became the largest city in North Carolina, developed on the trade of goods and slaves associated with plantation agriculture.[10] After Raleigh was named the state capital, New Bern rebuilt its economy by expanding on trade via shipping routes to the Caribbean and New England.[10] It was part of the Triangle Trade in sugar, slaves and desired goods. It reached a population of 3,600 in 1815.[10]

In 1862 during the early stages of the Civil War, the area was the site of the Battle of New Bern. Union forces captured and occupied the town until the end of the war in 1865. Nearly 10,000 enslaved blacks escaped during this period in the region and went to the Union camps for protection and freedom. The Union Army set up the Trent River contraband camp at New Bern to house the refugees. It organized the adults for work. Missionaries came to teach literacy to both adults and children.

After the January 1863 Emancipation Proclamation of President Abraham Lincoln, slaves in Union-occupied territories were declared free; more freedmen came to the Trent River camp for protection. The Army appointed Horace James, a Congregational chaplain from Massachusetts, as the "Superintendent of Negro Affairs for the North Carolina District."[11] In addition to the Trent River camp, James supervised development of the offshore Roanoke Island Freedmen's Colony, which was intended to be self-supporting.[12] Beginning in 1863, a total of nearly 4,000 freedmen from North Carolina enlisted in the United States Colored Troops to fight with the Union for their permanent freedom, including 150 men from the colony on Roanoke Island.[11]

Due to the continuous occupation by the Union troops, New Bern avoided some of the destruction of the war years. There was much social disruption because of the occupation and the thousands of freedmen camped near the city. Still, it recovered more quickly than many cities after the war.

By the 1870s the lumber industry was developing as the chief part of New Bern's economy. Timber harvested could be sent downriver by the two nearby rivers. The city continued to be a center for freedmen, who created communities independent of white supervision: thriving churches, fraternal associations, and their own businesses. By 1877 the city had a majority-black population.

The state legislature defined the city and county as part of North Carolina's 2nd congressional district which, as former plantation territory, held a concentration of the state's black residents. They elected four blacks to the US Congress in the late 19th century. The state's passage of a constitutional suffrage amendment in 1900 used various devices to disenfranchise black citizens. As a result, they were totally closed out of the political process, including participation on juries and in local offices; white Democrats maintained this suppression mostly, until after passage of federal civil rights legislation, including the Voting Rights Act of 1965, which provided for federal enforcement of constitutional rights.

By 1890 New Bern had become the largest lumber center in North Carolina and one of the largest in all of the South. During this time, as many as 16 lumber mills were running and employing hundreds of men from New Bern and the area. The competitive nature of the lumber barons, the abundance of lumber and craftsmen, led to the construction in New Bern of some of the finest homes in the South, many of which have survived. The lumber boom lasted until the 1920s. One by one the lumber mills went out of business. Today only Weyerhaeuser manufactures lumber in the area.

Union Point Park borders the Neuse and Trent rivers. It is the site of the city's major celebrations, such as Neuse River Days and the Fourth of July. Since 1979 the Swiss Bear Downtown Revitalization Corporation has worked to redevelop downtown; it has stimulated the creation of art galleries, specialty shops, antiques stores, restaurants and inns. This area has become a social and cultural hub. James Reed Lane is a downtown mini-park and pedestrian walk-through on Pollock Street across from historic Christ Church. Private restoration efforts have returned many of the downtown buildings to their turn-of-the-twentieth-century elegance.

In 2005, a segment of NBC's The Today Show noted that New Bern was one of the best places in the United States to retire. Retirees from the northern states have added to its population. 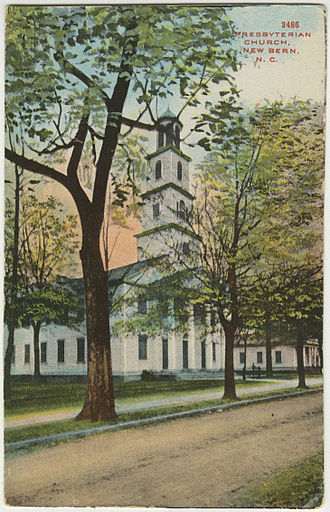 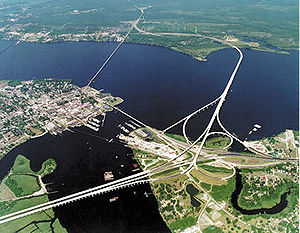 Aerial view of New Bern (center left) showing the confluence of the Trent (bottom center) and Neuse (left to right) rivers. East is up. The two larger bridges carry U.S. 70, U.S. 17, and NC 55, bypassing New Bern to the south through the unincorporated community of James City. The smaller bridge crossing the mouth of the Trent River is Front Street, while the smaller bridge crossing the Neuse is a railroad bridge.

New Bern is located in the center of Craven County at Lua error in Module:Coordinates at line 668: callParserFunction: function "#coordinates" was not found. (35.109070, −77.069111).[15] It is sited at the junction of the Trent and Neuse rivers, two tidal waterways.

U.S. Route 70 and U.S. Route 17 pass through the city, merging briefly as a four-lane expressway passing south of the city center. US 70 leads west 33 miles (53 km) to Kinston and southeast 35 miles (56 km) to Morehead City near the Atlantic Ocean. Raleigh, the state capital, is 112 miles (180 km) west via US 70. US 17 leads southwest 37 miles (60 km) to Jacksonville, North Carolina, and crosses the Neuse River on a new bridge to lead north 36 miles (58 km) to Washington, North Carolina.

New Bern experiences a humid subtropical climate typical of the Atlantic coastal plain. Summers are hot and humid, with frequent afternoon thunderstorms that account for much of the higher summer precipitation. Spring and fall are generally mild, with fall foliage occurring from late October to early November. Winters are relatively mild and dryer than the remainder of the year, with infrequent snowfall. 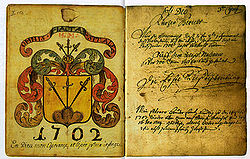 Title page of the 1702 Journal of Franz Ludwig Michel of Bern, Switzerland, a founder of New Bern, North Carolina