New Britain is a city in Hartford County, Connecticut, United States. It is located approximately 9 miles (14 km) southwest of Hartford. According to 2010 Census, the population of the city is 73,206.[1]

Among the southernmost of the communities encompassed within the Hartford-Springfield Knowledge Corridor metropolitan region, New Britain is home to Central Connecticut State University and Charter Oak State College.

The city's official nickname is the "Hardware City" because of its history as a manufacturing center and as the headquarters of Stanley Black & Decker. Because of its large Polish population, the city is often playfully referred to as "New Britski."[2]

New Britain was settled in 1687 and then was incorporated as a new parish under the name New Britain Society in 1754. Chartered in 1850 as a township and in 1871 as a city, New Britain had separated from the nearby town of Farmington, Connecticut. A consolidation charter was adopted in 1905.

During the early part of the 20th century, New Britain was known as the "Hardware Capital of the World", as well as "Hardware City". Major manufacturers, such as The Stanley Works, the P&F Corbin Company (later Corbin Locks), and North & Judd, were headquartered in the city.

The wire coat hanger was invented in 1869 by O. A. North of New Britain. In 1895, the basketball technique of dribbling was developed at the New Britain YMCA. In 1938, New Britain High School competed in the high school football national championship game in Baton Rouge, Louisiana. 1954 saw the development of racquetball, also at the YMCA.[3]

In 2007 it was reported that the Latin word for "honey" in the motto had been a typo for decades; it should be melle, but it had long been misspelled as mele. Former mayor William McNamara, who unsuccessfully tried to fix it during his term, suggested "to either fix the spelling immediately" or "switch to the English version of the motto."[4][5] As controversy arose from the matter, the word was superseded with the correct spelling, melle.

New Britain's terrain is mostly made up of soft, rolling hills and young Connecticut forest. The many parks are populated with trees, and in small, undeveloped areas, there is also brushy woods. New Britain's streets also have many trees lining the sides of the roads. Many front yards in the northern half of the city have at least one tree. One or two streams flow through New Britain, undisturbed by the development.

See also: List of Connecticut locations by per capita income

New Britain has the largest Polish population of any city in Connecticut, and by 1930 a quarter of the city was ethnically Polish.[10] Also referred to as "Little Poland", the city's Broad Street neighborhood has been home to a considerable number of Polish businesses and families since 1890. On September 23, 2008, through the urging of the Polonia Business Association, the New Britain City Council unanimously passed a resolution officially designating New Britain's Broad Street area as "Little Poland."[11] In recent years, the Polish community has been credited with revitalizing the area both culturally and economically. Media is served by three Polish language newspapers and a television station, and many businesses and civil agencies are bilingual. The post office branch in Little Poland is the only one in the nation with the word "post" written in Polish to welcome visitors. Each year, a Little Poland festival is held on the last Sunday of April.

Notable visitors to the Polish district have included Presidents Richard Nixon and Ronald Reagan on July 8, 1987.[12] In 1969, as then-Cardinal Karol Wojtyla, the future Pope John Paul II gave a mass at Sacred Heart Church.[13] A statue was erected in his honor in 2007.[14] Dubbed the city's "Polish heart" by The Boston Globe, Little Poland caught the attention of Polish Ambassador to the US Ryszard Schnepf, who toured the area with US Senators Chris Murphy and Richard Blumenthal, US Congresswoman Elizabeth Esty, as well as several members of the Polish Sejm.[citation needed]

The Polish influence could be in part responsible for some vowel qualities of the distinctive New Britain accent,[15] such as nasalization of reduced vowels before /n/, though a more characteristic feature of the central Connecticut dialect is distinguished by systematic substitution of the glottal stop in place of [t] for an unreleased /t/ word-finally and before syllabic consonants (e.g. "eight" is pronounced [ɛɪʔ] instead of [eɪt]). Thus the shibboleth pronunciation of New Britain for many locals is [nuˈbɹɪʔɨː̃n], instead of [nuˈbɹɪtn̩].[16]

According to the City's 2009 Comprehensive Annual Financial Report,[17] the top employers in the city are:

File:NewBritainUnderwearWashingDirections.jpg
The New Britain Knitting Co. factory shown in this set of directions for washing some of its products, about 1915

Connecticut Route 9 is the city's main expressway connecting traffic between Hartford (via I-84 and I-91) and Old Saybrook and Middletown. I-84 itself clips the northwestern corner of the city. Public transportation is provided by Connecticut Transit.

New Britain has a nearby Amtrak station in adjacent Berlin. The Vermonter (once daily) and Shuttle (multiple daily arrivals/departures) provide service to destinations throughout the northeastern United States. There are also plans underway for a Springfield–Hartford–New Haven commuter rail, which would have Berlin as one of its stations. 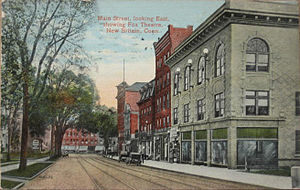