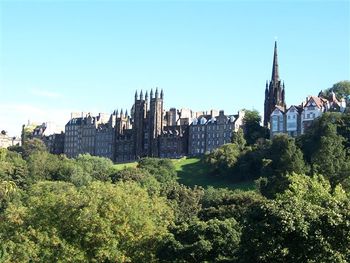 New College in The University of Edinburgh is one of the largest and most renowned centres for (post)graduate studies in Theology and Religious Studies in the UK, with approximately 150 students in M.A., M.Phil. and Ph.D. degree programmes in any given year, and from over 30 countries. There are now nearly 30 full-time members of the academic staff, and they include internationally respected scholars in various specialities.

New College originally opened its doors in 1846 as a college of the Free Church of Scotland, later of the United Free Church of Scotland, and from the 1930s has been the home of the School of Divinity (formerly the Faculty of Divinity) of the University of Edinburgh. As "New College" it continues the historic commitment to offer a programme of academic preparation for ministry in the Church of Scotland, also made use of by ministerial candidates from other churches. In the 1970s the Faculty of Divinity also began offering undergraduate degrees in Theology and Religious Studies, and students in these programmes now make up the majority of the nearly 300 undergraduates enrolled in any given year.

The School of Divinity offers five different undergraduate (Honours) degrees. The MA Divinity[1] allows students to focus on traditional areas of Christian studies (Theology, Biblical Studies, Ecclesiastical History, Christian Ethics and Systematic Theology). The MA Religious Studies[2] introduces students to the methods of the study of religion and a variety of religious traditions such as indigenous religions, Islam, Judaism, Christianity, Buddhist and Hindu traditions. The MA Religious Studies and English Literature[3] and the MA Philosophy and Theology[4] allow students to work cross-disciplinary. The Bachelor of Divinity[5] prepares candidates for the ministry (and is open to other interested students also). Members of academic staff are all employees of the University of Edinburgh,[6] and are today an international body of scholars of various persuasions in religious matters.

The School also offers several master's degree programmes[7] (e.g., Biblical Studies, Science and Religion, Theology in History, Theology and Ethics, World Christianity), and is an internationally known centre for PhD studies in a broad spectrum of specialities. There is no confessional test for staff or students. Only a portion of the undergraduate students are ministerial candidates, and the majority enter a variety of careers after studies (e.g. teachers, libraries, TV/radio production, civil service, further professional studies in law, finance, social work, etc).

New College is located in the city centre on Mound Place (on The Mound), overlooking Princes Street Gardens, the National Gallery of Art, and Princes Street. The building was designed by the respected 19th century architect William Henry Playfair. 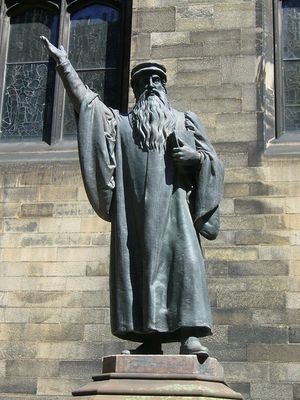 Statue of John Knox in the New College quadrangle.

The New College library[9] was founded in 1843 as the Library of the Free Church College. It is one of the largest theological libraries in the United Kingdom, holding a large collection of manuscripts, including the papers of Thomas Chalmers, John Baillie, J. H. Oldham and James S. Stewart. The library is situated in the eastern wing of New College, and its splendid reading hall was originally built as the sanctuary of the Free High Kirk.

Rainy Hall[10] is a gothic revival dining hall, adorned with heraldry and featuring a hammerbeam roof. It is at the centre of college life, used by students and faculty for conversation and meals.

As well as the teaching facilities and the library, the New College complex also includes the General Assembly Hall of the Church of Scotland, which, however, remains the property of the Church, and is where annual meetings of the General Assembly of the Church of Scotland are held. This hall was also used as a temporary home for the debating chamber of the Scottish Parliament, from its establishment in 1999 until the completion of the new Scottish Parliament Building at Holyrood in 2004.

Regarding the history of New College see the following: