New Cross is a district and ward of south London in the London Borough of Lewisham, England. It is situated 4.5 miles south-east of Charing Cross. The ward covered by London post town and the SE 14 postcode district. New Cross is near St Johns, Telegraph Hill, Nunhead, Peckham, Brockley, Deptford and Greenwich. New Cross is home to Goldsmiths, University of London, Haberdashers' Aske's Hatcham College and Addey and Stanhope School.

The area was originally known as Hatcham (the name persists in the title of the Anglican parishes of St. James, Hatcham along with its school, and All Saints, Hatcham Park). The earliest reference to Hatcham is the Domesday Book of 1086 as Hacheham. It was held by the Bishop of Lisieux from the Bishop of Bayeux. According to the entry in the Domesday Book Hatcham's assets were: 3 hides; 3 ploughs, 6 acres (24,000 m2) of meadow, woodland worth 3 hog and rendered £2.[2]

Hatcham tithes were paid to Bermondsey Abbey from 1173 until the dissolution of the monasteries. A series of individuals then held land locally before the manor was bought in the 17th century by the Haberdashers' Company, a wealthy livery company that was instrumental in the area's development in the 19th century. Telegraph Hill was for many years covered by market gardens also owned by the Worshipful Company of Haberdashers. Until the creation of the London County Council in 1889, the area was a part of the counties of Kent and Surrey.

New Cross is believed to have taken its name from a coaching house originally known as the Golden Cross, which stood close to the current New Cross House pub. The diarist John Evelyn, who lived in Deptford, wrote in 1675 that he met a friend at 'New Crosse' in his coach before travelling down through Kent and on to France.

In the later 19th century, the area became known as the New Cross Tangle on account of its numerous railway lines, workshops and two stations — both originally called New Cross (one was later renamed New Cross Gate).

Hatcham Iron Works in Pomeroy Street was an important steam locomotive factory, the scene of a bitter confrontation in 1865 between its manager, George England, and the workers. The Strike Committee met at the Crown and Anchor pub in New Cross Road, now the site of Hong Kong City Chinese restaurant. George England’s house, Hatcham Lodge, is now 56 Kender Street.[3]

New Cross bus garage was formerly the largest tram depot in London, opening in 1906. During the 1926 General Strike in support of the miners, strikebreakers were brought in to drive trams from the depot. On 7 May, police baton charges were launched to clear a crowd of 2-3,000 pickets blockading the entrance (reported as "Rowdyism in New Cross" by the Kentish Mercury).

The last London tram, in July 1952, ran from Woolwich to New Cross. It was driven through enormous crowds, finally arriving at its destination in the early hours of 6 July.[4]

On 25 November 1944 a V-2 rocket exploded at the Woolworths store in New Cross Road (on the site later occupied by an Iceland supermarket), 168 people were killed, and 121 were seriously injured. It was London's most devastating V-bombing of the entire war. On Wednesday 25 November 2009 a new commemorative plaque was unveiled on the site by the Mayor of Lewisham, marking the 65th anniversary of the explosion.

In August 1977 the area saw the so-called Battle of Lewisham, during which the far right British National Front were beaten off by militant anti-fascists and local people.[5]

On 18 January 1981 13 young black people were killed in the New Cross Fire at a party at 439 New Cross Road. Suspicions that the fire was caused by a racist attack, and apparent official indifference to the deaths, led to the largest ever political mobilisation of black people seen in Britain.

During the 1980s, the Goldsmiths Tavern hosted alternative cabaret nights, organised by Nikky Smedley.[citation needed] Playing host to fledgling acts including The Cholmondeleys, Julian Clary and Vic Reeves.[citation needed] Goldsmiths' Students' Union also had a reputation for putting on established and up and coming bands of the era including The B-52's, The Pogues, The Monochrome Set, Simply Red, Wet Wet Wet and Wild Willy Barrett.[citation needed]. The Irish owners of the Harp Club let The Flim Flam run a regular Friday night club there.[citation needed] The Flim Flam, with their wide music interest, recruited two DJs from Goldsmiths (Allison Webster and Mimi Kerns) to put on a punk and indie night on Saturdays A Million Rubber Bands (later "Totally Wired"). This venue later became The Venue.

New Cross was noted as the birthplace of New Rave[citation needed], and is fast gaining ground with London's fashion and music journalists,[citation needed] some even coming to regard it as South London's answer to Shoreditch in the wake of its commercialisation.[citation needed] The New Rave scene began with a tightly connected movement of artists, DJ’s, bands and squatters called !WOWOW! who have staged parties since 2003 in New Cross.[citation needed] New Rave champions Klaxons spent their formative years in New Cross and released their début single, Gravity's Rainbow, in April 2006 on Angular Recording Corporation, a label set up by two ex-Goldsmiths students.[citation needed] The area supports a fledgling student opera company, Opera Gold, run by Goldsmiths, University of London.

Millwall Football Club, founded by mainly Scottish workers at J.T. Morton, a cannery and food processing plant in Millwall on the Isle of Dogs in 1885, was based at The Den in Cold Blow Lane from 1910 to 1993. The ground attracted crowds of more than 45,000 at its peak, but by the 1980s was notorious for the club's incidents of football hooliganism.

Millwall moved a short distance to The New Den, off Ilderton Road and just within Bermondsey, at the start of the 1993–94 season. The club remains within the New Cross electoral ward.[6]

Speedway racing was staged at the New Cross Speedway and Greyhound Stadium, situated at the end of Hornshay Street, off Ilderton Road. The venue became home to the New Cross Rangers in 1934 when the Crystal Palace promotion moved en bloc. The track, reputed to be one of the shortest and known as "The Frying Pan Bowl", operated until 1939 and re-opened in 1946 running until the early 1950s. The track re-opened for a short spell 1959 - 1961 and closed its doors to the sport for the last time mid season 1963. The stadium was also the scene of the UK's first stock car race at Easter 1954, with 26,000 in the crowd and thousands more locked outside. The site of the Stadium is now an open space, Bridge House Meadows. The 1949 speedway film Once a Jolly Swagman, starring Dirk Bogarde, was filmed at New Cross.

For many years New Cross was home to the Laban Centre, now Trinity Laban Conservatoire of Music and Dance which was based at Laurie Grove producing choreographers such as Matthew Bourne and Lea Anderson. In 2002 Laban moved to new studios in Deptford. However, it still uses its New Cross campus, where studios have since been refurbished. 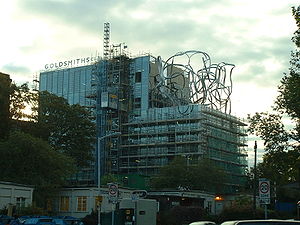 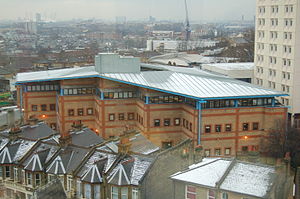 The proximity of New Cross to Deptford and Greenwich, both of which have strong maritime connections, led to the establishment of the Royal Naval School in New Cross in 1843 (designed by architect John Shaw Jr, 1803–1870) to house "the sons of impecunious naval officers". The school relocated further south-east to Mottingham in 1889, and the former school building was bought by the Worshipful Company of Goldsmiths, who opened the Goldsmiths’ Company’s Technical and Recreative Institute in 1891. This was in turn handed over to the University of London in 1904 and is now Goldsmiths, University of London.

The former Deptford Town Hall building in New Cross Road, now also used by Goldsmiths, was built in the Edwardian Baroque style by Lanchester and Rickards, 1903-5. Nautical references include carvings of Tritons, statues of admirals and a sailing ship weathervane on the clock turret.[7]

New Cross Fire Station is a Grade II listed building at 266 Queens Road, built in 1893-94 to a design by the architect Robert Pearsall.[8]

The Kingdom Hall of Jehovah's Witnesses was the South East London Synagogue until it closed in 1985. The present building, which dates from the 1950s, replaced another destroyed in a German air raid in 1940.

The Venue nightclub in New Cross Road has a long history as a place of entertainment. It opened as the New Cross Super Kinema in 1925, with a cinema on the ground floor and the New Cross Palais de Danse above, as well as a cafe. The name was shortened to New Cross Kinema from 1927, the plain Kinema in 1948, and finally Gaumont in 1950. It closed in August 1960, and remained derelict for some time. Part of the building was demolished before the old dancehall became The Harp Club and then The Venue in the late 1980s.[9]

Also, the Duke of Albany public house (converted to flats in 2008) was the facade for The Winchester pub in the film Shaun of the Dead.

Both stations are served by London Overground. From New Cross Gate passengers can travel to Crystal Palace and West Croydon to the south and Highbury & Islington to the north. New Cross acts as the terminus for the service from Dalston Junction. Trains sometimes continue to Highbury & Islington but this is more common during engineering works. Passengers can easily make a brief interchange at Dalston Junction for trains to Highbury and Islington

New Cross also has mainline suburban services operated by Southeastern. Trains generally run north to Cannon Street or Charing Cross to the north and south-east to Lewisham, Bexleyheath, Hayes and Dartford in Kent.