The New Democrat Coalition is a Congressional Member Organization within the United States Congress made up of Democrats who support an agenda that the organization describes as moderate and pro-growth. A November 2012 press release described the organization as "Congress' largest coalition of moderates heading into the 113th Congress," and announced the election of Representative Ron Kind as the Coalition's Chair. As of January 2015, there were 46 members in the House of Representatives.[11]

The NDC has worked to craft and pass legislation, including Permanent Normal Trade Relations (PNTR) for the People's Republic of China, fast track Trade Promotion Authority, digital signatures, and H-1B visa reform and continues to work on matters such as privacy, broadband, expanding e-learning opportunities and making government more accessible and efficient through the use of technology. Many[who?] in the Democratic Party's left-wing criticize the group, however, accusing it of ignoring social justice and the poor.[citation needed] 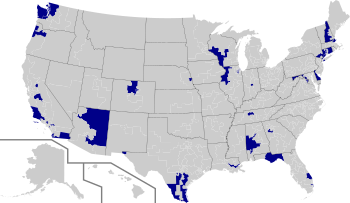 Map of caucus members during the 114th Congress 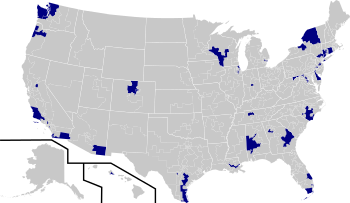 Map of caucus members during the 113th Congress 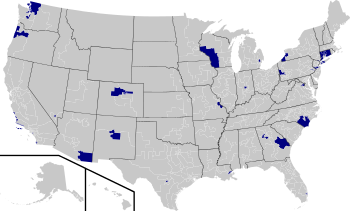 Map of caucus members during the 112th Congress

In the 114th Congress, the following 46 members of the House of Representatives currently belong to the New Democrat Coalition:[11]

Members who have left Congress:

Former members who remain in Congress, but who are no longer affiliated with the NDC: