The NEP represented a more capitalism-oriented economic policy, deemed necessary after the Russian Civil War of 1917 to 1922, to foster the economy of the country, which was almost ruined. The complete nationalization of industry, established during the period of War Communism, was partially revoked and a system of mixed economy was introduced, which allowed private individuals to own small enterprises,[2] while the state continued to control banks, foreign trade, and large industries.[3] In addition, the NEP abolished prodrazvyorstka (forced grain requisition)[2] and introduced prodnalog: a tax on farmers, payable in the form of raw agricultural product.[4] The Bolshevik government adopted the NEP in the course of the 10th Congress of the All-Russian Communist Party (March 1921) and promulgated it by a decree on 21 March 1921 "On the Replacement of Prodrazvyorstka by Prodnalog". Further decrees refined the policy.

Other policies included the monetary reform (1922–1924) and the attraction of foreign capital.

On November 8, 1917, the Bolsheviks took control of Saint Petersburg (then named Petrograd), and ousted the provisional government from the Winter Palace. The Bolsheviks declared state power under the Congress of Soviets, but that did not complete the seizure. A brutal Civil War ensued, pitting the Bolshevik Red Army against the White Army. After the former won, Russian citizens faced economic hardships. The dramatic decrease in support for the Bolsheviks inspired Lenin[citation needed] to retract his policy of War Communism and shaped how he crafted his New Economic Policy.

The Civil War devastated Russian cities. It destroyed lines of communication, modes of transportation (especially railroads), and disrupted basic public services. Infectious diseases thrived, especially typhus. Shipments of food and fuel by railroad and water dramatically decreased. Residents first experienced a shortage of heating oil, then coal, until they resorted to wood. Although the armies fought the Civil War battles mostly outside of urban areas, urban populations dramatically decreased.[5] Populations in northern towns (excluding capital cities) declined an average of 24%.[6] The breakdown of transportation deprived northern towns of food more than southern towns because the south had more agricultural production. Petrograd itself lost 850,000 people and accounted for half of urban population decline during the Civil War.[6] Workers migrated south to take hold of peasants' surpluses. Recent migrants to cities left because they still had ties to villages.[7] Hunger and poor conditions drove residents out of cities and towards the rural cottage industry.

Because the Bolshevik base of support came from urban workers, the exodus posed a serious problem. At the end of the Civil War, Bolsheviks controlled cities, but 80% of the Russian population was peasants.[8] Factory production severely slowed or halted. Factories lacked 30,000 workers in 1919. Residents had to adopt self-sufficient behaviors in order to survive. Residents searched for valuable personal belongings, started creating artisan crafts, and began gardening to trade for and grow food. The acute need for food encouraged residents to obtain 50%–60% of food through illegal trading (see meshochnik). The shortage of cash caused the black market to use a barter system, which was inefficient.[9]

Despite these efforts, a drought, frost, then famine in 1921–1922 caused millions to starve to death, especially in the Volga region, and urban support for the Bolshevik party eroded.[10] When no bread arrived in Moscow in 1921, workers became hungry and disillusioned. They organised demonstrations against the party's policies of privileged rations, in which the Red Army, members of the party, and students received rations first. In March 1921, Kronstadt soldiers and sailors staged a major rebellion. Anarchism and populism, brewing since the tsarist bureaucracy of the 17th and 18th centuries, fuelled the rebellion.[9]

In 1921, Lenin replaced the food requisitioning policy with a tax, signaling the inauguration of the New Economic Policy.[11] 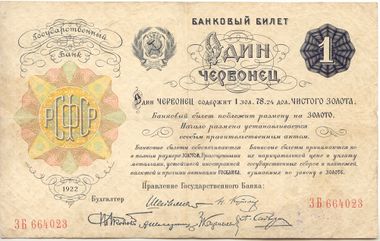 Reestablishment of a stable currency, the gold-backed chervonets, was an essential policy component of the Soviet state's return to a money-based economy.

The laws sanctioned the co-existence of private and public sectors, which were incorporated in the NEP, which on the other hand was a state oriented "mixed economy".[12]

The NEP represented a move away from full nationalization of certain parts of industries. Some kinds of foreign investments were expected by the Soviet Union under the NEP, in order to fund industrial and developmental projects with foreign exchange or technology requirements.[13]

The NEP was primarily a new agricultural policy.[14] The Bolsheviks viewed traditional village life as conservative and backward. It was reminiscent of the Tsarist Russia that had supposedly been overthrown by the October Revolution. With the NEP, the state only allowed private landholdings because the idea of collectivized farming had met strong opposition.[15]

Lenin understood that economic conditions were dire, so he opened up markets to a greater degree of free trade, hoping to motivate the population to increase production. The main policy he used was an end to grain requisitions and instead instituted a tax on the peasants, thereby allowing them to keep and trade part of their produce. At first, this tax was paid in kind, but as the currency became more stable in 1924, it was changed to a cash payment.[2] This increased the peasants' incentive to produce, and in response production jumped by 40% after the drought and famine of 1921–22.[16]

NEP economic reforms aimed to take a step back from central planning and allow the economy to become more independent. NEP labor reforms tied labor to productivity, incentivizing the reduction of costs and the redoubled efforts of labor. Labor unions became independent civic organizations.[citation needed] NEP reforms also opened up government positions to the most qualified workers. The NEP gave opportunities for the government to use engineers, specialists, and intelligentsia for cost accounting, equipment purchasing, efficiency procedures, railway construction, and industrial administration. A new class of "NEPmen" thrived. These private traders opened up urban firms hiring up to 20 workers. NEPmen also included rural artisan craftsmen selling their wares on the private market.[17]

Lenin considered the NEP as a strategic retreat from socialism.[18] He believed it was capitalism but justified it by insisting that it was a different type of capitalism, "state capitalism" which was the last stage of capitalism before socialism evolved.[19]

Leon Trotsky and Joseph Stalin disagreed over how to develop the Soviet economy after the World War and the Civil War. Trotsky, supported by left-wing members of the Communist Party, believed that socialism in Russia would only survive if the state controlled the allocation of all output. Trotsky believed that the state should repossess all output to invest in capital formation. On the other hand, Stalin supported the more conservative members of the Communist Party and advocated for a state-run capitalist economy. Stalin managed to wrestle control of the Communist Party from Trotsky. After defeating the Trotsky faction, Stalin reversed his opinions about economic policy and implemented the First Five-Year Plan.[20]

After NEP was instituted, agricultural production increased greatly. Instead of the government taking all agricultural surpluses with no compensation,[dubious – discuss] farmers now had the option to sell some of their produce, giving them a personal economic incentive to produce more grain. This incentive, coupled with the breakup of the quasi-feudal landed estates, surpassed pre-Revolution agricultural production. While the agricultural sector became increasingly reliant on small family farms, heavy industries, banks, and financial institutions remained owned and run by the state. This created an imbalance in the economy where the agricultural sector was growing much faster than heavy industry. To maintain their income, factories raised prices. Due to the rising cost of manufactured goods, peasants had to produce much more wheat to buy these consumer goods, which increased supply and thus lowered the price of these agricultural products. This fall in prices of agricultural goods and sharp rise in prices of industrial products was known as the Scissors Crisis (due to the crossing of graphs of the prices of the two types of product). Peasants began withholding their surpluses in wait for higher prices, or sold them to "NEPmen" (traders and middle-men) who re-sold them at high prices. Many Communist Party members considered this an exploitation of urban consumers. To lower the price of consumer goods, the state took measures to decrease inflation and enact reforms on the internal practices of the factories. The government also fixed prices, in an attempt to halt the scissor effect.[citation needed]

The NEP succeeded in creating an economic recovery after the devastation of World War I, the Russian Revolution, and the Russian Civil War. By 1925, in the wake of Lenin's NEP, a "... major transformation was occurring politically, economically, culturally and spiritually." Small-scale and light industries were largely in the hands of private entrepreneurs or cooperatives. By 1928, agricultural and industrial production had been restored to the 1913 (pre-World War I) level.[4]

By 1924, the year of Lenin's death, Nikolai Bukharin had become the foremost supporter of the New Economic Policy. The USSR abandoned NEP in 1928 after Joseph Stalin obtained a position of leadership during the Great Turn. Stalin had initially supported the NEP against Leon Trotsky, but switched in favour of collectivization during the Grain Procurement Crisis of 1928 and saw the need to quickly accumulate capital for the vast industrialization programme introduced with the Five Year Plans starting in 1928. The Bolsheviks hoped that the USSR's industrial base would reach the level of capitalist countries in the West, to avoid losing a future war. (Stalin proclaimed, "Either we do it, or we shall be crushed.") Stalin proposed that the grain crisis was caused by kulaks - relatively wealthy farmers who hoarded grain and participated in speculation of agricultural produce. The peasant farms were too small to support the massive agricultural demands of the Soviet Union's push for rapid industrialization, and Soviet economists[which?] claimed that only a collectivization of farms could support such an expansion. Accordingly, Stalin imposed collectivization to replace private farms. Collectivization included stripping of land from the kulaks to distribute it among agricultural cooperatives (kolkhozes and sovkhozes).[21]

Lenin and his followers saw the NEP as an interim measure. However, it proved highly unpopular with the Left Opposition in the Bolshevik party because of its compromise with some capitalist elements and the relinquishment of state control.[4] The Left saw the NEP as a betrayal of Communist principles, and believed it would have a negative long-term economic effect, so they wanted a fully planned economy instead. In particular, the NEP fostered a class of traders ("NEPmen") whom the Communists regarded as "class enemies" of the working class. On the other hand, Vladimir Lenin is quoted to have said "The NEP is in earnest and long-term" (НЭП – это всерьез и надолго),[citation needed] which has been used[by whom?] to surmise that if Lenin had lived, the NEP would have continued beyond 1929. Lenin had also been known to say about NEP, "We are taking one step backward to later take two steps forward",[citation needed] suggesting that, though the NEP pointed in another direction, it would provide the economic conditions necessary for socialism eventually to evolve.

Despite Lenin's opinion that the NEP should last several decades at least, until universal literacy was accomplished,[citation needed] in 1928, after only seven years of NEP, Lenin's successor Stalin introduced full central planning, re-nationalized much of the economy, and from the late 1920s onwards introduced a policy of rapid industrialization. Stalin's collectivization of agriculture was his most notable departure from the NEP approach.

Pantsov and Levine see many of the post-Mao economic reforms of Deng Xiaoping in China as influenced by NEP.[22]