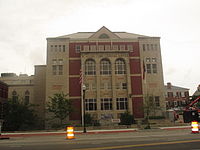 Next to the county courthouse in Wilmington is the W. Allen Cobb Judicial Annex. 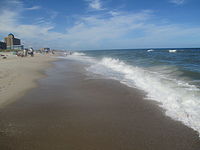 The surf at Carolina Beach in New Hanover County

New Hanover County is one of 100 counties located in the U.S. state of North Carolina. As of the 2010 census, the population was 202,667.[1] Though second smallest in area, it is one of the most populous as its county seat, Wilmington,[2] is one of the state's largest cities. The county was created in 1729 as New Hanover Precinct and gained county status in 1739.[3]

The county was formed in 1729 as New Hanover Precinct of Bath County, from Craven Precinct. It was named for the House of Hanover, which was then ruling Great Britain.[4]

In 1734 parts of New Hanover Precinct became Bladen Precinct and Onslow Precinct. With the abolition of Bath County in 1739, all of its constituent precincts became counties.

Some of the closing battles of the American Civil War happened in the county with the Second Battle of Fort Fisher (the last major coastal stronghold of the Confederacy) and the Battle of Wilmington. The Wilmington Insurrection of 1898 and its establishment of Jim Crow laws closed out the 19th-Century with civil rights injustices which would last until the African-American Civil Rights Movement through the second half of the 20th century, three generations later. The insurrection was planned by a group of nine conspirators which included Hugh MacRae. He later donated land to New Hanover County for a park which was named for him. In the park still stands a plaque in his honor that does not mention his role in the 1898 insurrection.

New Hanover is considered a fairly evenly divided county in political terms, favoring Democrats and Republicans in near equal measure. In the 2004 presidential elections, the county supported George W. Bush over John Kerry by 56% to 44%. On that same day, it voted by 53% to 45% to re-elect Democratic Governor Mike Easley against local Republican Patrick J. Ballantine.

New Hanover County is a member of the regional Cape Fear Council of Governments. 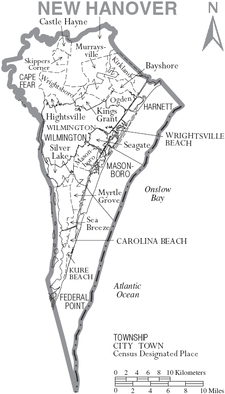