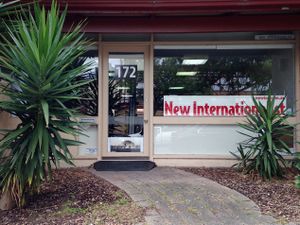 New Internationalist was launched in the UK as a monthly magazine in 1973. Its forerunner was The Internationalist sent termly to members of the student development organization Third World First.

Today, the magazine is run by New Internationalist Publications, a co-operative-run publisher based in Oxford, England. The magazine also has offices in Adelaide, Australia, Christchurch, New Zealand (Aoteoroa) and Toronto, Canada. Editorial duties are primarily carried out by the New Internationalist team based in the UK. The other offices focus primarily on marketing, sales and securing subscriptions.

New Internationalist Australia was incorporated on 15 March 1979 as a completely separate company from New Internationalist, and there is no head office / branch office relationship. Originally based in Melbourne, the Adelaide office, which operates today, was set up in 1982. A full-time Australian editor was appointed between 1979 and 1982 and again between 1997 and 2002. Between 1982 and 1997 and since 2002, editorial duties in Australasia have been carried out on an ad hoc basis as required by the New Internationalist team in the UK.

On formation, a full-time editor was appointed, based in Melbourne. The first editor resigned after just five months. The second, Bob Hawkins, was recruited by the Australian board at the end of 1979 and edited three issues of the magazine – Elites (November 1980), Pacific Islands (produced in Papua New Guinea, July 1981) and Indonesia (October 1982).

The period of tension ended with the resignation of Bob Hawkins in 1982 and a restructuring of New Internationalist Australia carried out when Chris Sheppard from the New Internationalist team in the UK travelled to Melbourne in September of the same year. The result was that Brian Loffler of CAA Data Aid in Adelaide was appointed to the board as Joint Company Secretary and given the task of setting up the Adelaide office. At the same time, it was decided that Cameron Forbes of the Melbourne Age should be paid a retainer to undertake any editorial duties that the New Internationalist team in the UK required. This ensured that significant financial savings were made since, not only did the board not have to pay a full-time editor’s salary, but also costly airfares to the UK were reduced significantly (Bob Hawkins had frequently flown over to the UK to participate in editorial meetings with the UK team).

In 1986, Australian Catholic Relief (ACR) and the Asia Partnership for Human Development (APHD) withdrew from the board, following an issue of the magazine which focused on Sex (April 1986). These Catholic aid agencies had long had reservations about the magazine’s treatment of subjects such as family planning and homosexuality, their reservations sparked particularly by issues of the magazine on The Family (December 1982) and Feminism (August 1985).

In 1987, the non-executive directors of the company (who had held their director positions as representatives of the various founding organisations) resigned to allow the company to become a worker-run company.

In 1996, a flat salary structure was adopted. Since then, all permanent members of staff have received the same base salary, independent of the type of work being undertaken.

In 1997, Anouk Ride was appointed Australasian Editor of the New Internationalist magazine, working part-time from the Adelaide, Australia office and part-time from the Oxford, UK office. This was a significant appointment as it was the first time a full-time Australasian editor had been in place since 1982. She held the position until her resignation in December 2000.

From mid-2001 until mid-2002, Chris Richards held the position of Australasian Editor. Then, from 2002 to mid-2009, Chris was retained by the Oxford-based New Internationalist company (NIPL) as an editorial consultant. She resigned in May 2009.

Later in the year they successfully crowd-funded the building of a universal iPad, iPhone & iPod Touch app based on the API from the Ruby on Rails web app. In 2014 the New Internationalist magazine app was launched on the Apple App Store.

More information about the features of the app are available on the New Internationalist blog.

The UK-based New Internationalist team describes itself as "exist[ing] to report on the issues of world poverty and inequality; to focus attention on the unjust relationship between the powerful and powerless worldwide; to debate and campaign for the radical changes necessary to meet the basic needs of all; and to bring to life the people, the ideas and the action in the fight for global justice."[4] New Internationalist Australia fully supports these goals.