The agency that became NJDOT began as the New Jersey State Highway Department (NJSHD) circa 1920.[3] NJDOT was established in 1966 as the first State transportation agency in the United States.

In 1979, with the establishment of New Jersey Transit, NJDOT's rail division (which funded and supported State-sponsored passenger rail service) was folded into the new agency.

Until 2003, the NJDOT included the Division of Motor Vehicles (DMV), which was re-established as the self-operating New Jersey Motor Vehicle Commission (MVC).

Since the 1990s, NJDOT has been phasing out many of the traffic circles in New Jersey. 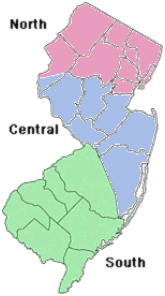 NJDOT operates, develops and maintains the State's public road system, including Interstate, State and Federal highways, with a total of 2,316.69 miles of NJDOT-owned and operated roads (as of July 2015).[4] Most major highways including Interstate, U.S. and NJ State routes within New Jersey are under NJDOT jurisdiction, except toll routes including the New Jersey Turnpike, Garden State Parkway (under the New Jersey Turnpike Authority) and the Atlantic City Expressway as well as the interstate toll bridges and tunnels.

NJDOT develops interim and long-term plans and strategic policy on freight and shipping in and around the state. These intermodal policies cover trucking, rail, maritime and air freight.

Assistance to local communities and grants for transportation-related projects.

The NJDOT was also responsible for funding and supporting passenger rail service within New Jersey and to and from nearby points from late 1960s onward, including procuring new modern equipment and rolling stock. The agency purchased EMD GP40Ps for the Central Railroad of New Jersey in 1968, the GE U34CH locomotives and Comet I cars for the Erie Lackawanna (1970) and Arrow I, II & III electric MU cars for the Penn Central in 1968-69, 1974 and 1977-78 respectively. During 1976 NJDOT took control of passenger rail routes operated by the Penn Central, Erie Lackawanna, CNJ and Reading Lines (with Conrail operating services under contract).