New Monasticism is a diverse movement, not limited to a specific religious denomination or church and including varying expressions of contemplative and prophetic life. These include evangelical Christian communities such as Shane Claiborne’s “Simple Way Community” and Jonathan Wilson-Hartgrove's “Rutba House,” European and Irish new monastic communities, such as that formed by Bernadette Flanagan, non-traditional spiritual communities such as the "Community of the New Monastic Way" founded by feminist contemplative theologian Beverly Lanzetta, and "interspiritual" new monasticism, such as that developed by Rory McEntee and Adam Bucko. These communities expand upon traditional monastic wisdom, translating it into forms that can be lived out in contemporary lives "in the world." 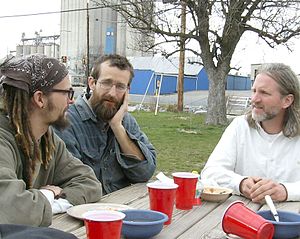 The origin of the new monastic movement is difficult to pinpoint. Some communities now identified with new monasticism have been in existence since the 1970s and 80s in the UK. Other well-known communities, such as the Simple Way in Philadelphia, formed in the mid-90s.[1] Bede Griffiths, a Roman Catholic Camaldolese monk who oversaw a Christian-Hindu ashram in India from 1968-1993, spoke often of a the future of monasticism as being a '"lay movement"', and developed a vision for new monastic life.[2] Raimon Panikkar outlined the idea of a '"new monk"' in a series of lectures in 1980 given to a group of western and eastern monastics as well as non-monastic lay contemplatives at Holyoke, MA, which were subsequently published in the book Blessed Simplicity: The Monk as Universal Archetype.[3] In the early 1980s, contemplative feminist theologian Beverly Lanzetta started the '"Community of the New Monastic Way"', a non-denominational new monastic community still in existence today. Recently, various new monastic communities have appeared in Ireland and increasingly across the United States, including '"interspiritual"' new monastic communities, connected to the lineage of Bede Griffiths, such as that seen in the Foundation for New Monasticism.

The notion and terminology of Protestant “new monasticism” was developed by Jonathan Wilson in his 1998 book called Living Faithfully in a Fragmented World.[4] Wilson was, in turn, building on ideas of theologian Dietrich Bonhoeffer, who said in 1935: “the restoration of the church will surely come only from a new type of monasticism which has nothing in common with the old but a complete lack of compromise in a life lived in accordance with the Sermon on the Mount in the discipleship of Christ.”[5] Wilson also built on ideas of philosopher Alasdair MacIntyre. Noting the decline of local community that could sustain the moral life, MacIntyre ended his book After Virtue, by voicing a longing for "another... St. Benedict."[6] By this, he meant someone in the present age to lead another renewal of morality and civility through community. Wilson identified with that longing in his own book, but outlined a vision to carry it forward within the Protestant Christian tradition.[7]

Calling the vision a "new monasticism", he proposed four characteristics that such a monasticism would entail: (1) it will be "marked by a recovery of the telos of this world" revealed in Jesus, and aimed at the healing of fragmentation, bringing the whole of life under the lordship of Christ; (2) it will be aimed at the "whole people of God" who live and work in all kinds of contexts, and not create a distinction between those with sacred and secular vocations; (3) it will be disciplined, not by a recovery of old monastic rules, but by the joyful discipline achieved by a small group of disciples practicing mutual exhortation, correction, and reconciliation; and (4) it will be "undergirded by deep theological reflection and commitment," by which the church may recover its life and witness in the world.[8]

The middle months of 2004 became a defining moment for the movement, when there was a gathering of a number of existing communities and academics in Durham, North Carolina, where they drew together something like a "rule of life," referred to as the "12 marks" of new monasticism.[9] The gathering took place at a new monastic community called "Rutba House," of which some founding members were Jonathan and Leah Wilson-Hartgrove. Not coincidentally, Leah Wilson-Hartgrove is the wife of Jonathan Wilson whose writing has galvanized the movement.[10]

The "Twelve Marks" of new monasticism express the common thread of many new monastic communities.[11] These "marks" are:

The movement differs from other Christian monastic movements in many ways.

Other Forms of New Monasticism 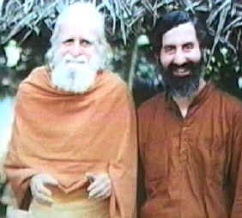 Catholic Camaldolese monk Bede Griffiths spoke of monastic life being essentially a lay calling, and saw the future of monastic life in lay communities. “The monk is a lay person…An order of monastics is essentially a lay order. Some monks may live in monasteries, but increasingly the majority will live in their own homes or form small communities—a monastic order in the world.”[13] He went on to express a new vision for monastics, one in which communities and individuals live spiritual lives independent of religious organizations or institutions, independent of celibacy and overarching rules and dogmas—free to follow their own conscience and guidance of the Holy Spirit in living a sacred life, yet united in the common cause of building a sacred world. A good summary of Fr. Bede’s thought one these matters is found in The New Creation in Christ.[2] Fr. Bede also wrote many other books on contemplative life, inter-religious experience and exploration, and the relationship between science and religion.

Raimon Panikkar explicated a vision of the "new monk" during a series of lectures given to western and eastern monastic from various religious traditions and lay contemplatives in 1980 at Holyoke, MA, these lectures were subsequently published as Blessed Simplicity: The Monk as Universal Archetype.[3] There Panikkar said the traditional monk is "only one way of realizing [this] universal archetype. … If the monastic dimension exists at least potentially in everybody, the institution of monasticism should be equally open to everybody. … The monastery, then, would not be the ‘establishment’ of the monks, but the schola Domini, the school where that human dimension is cultivated and transmitted. … Here appears the consequence of our distinction between the monk as archetype, i.e., the monk as a paradigm of religious life, against the archetype of the monk, i.e., the human archetype lived out by the monks, but which may also be experienced and lived today in different ways."[14]

The Community of the New Monastic Way

Beverly Lanzetta began a new monastic community in the early 1980s that was not associated with any particular religious tradition, "The Community of the New Monastic Way." Lanzetta speaks of the contemplative dimension of new monastic life as both proceeding and going beyond the religious traditions themselves. This is articulated in her books, Emerging Heart: Global Spirituality and the Sacred,[15] Path of the Heart and Radical Wisdom: A Feminist Mystical Theology.[16] 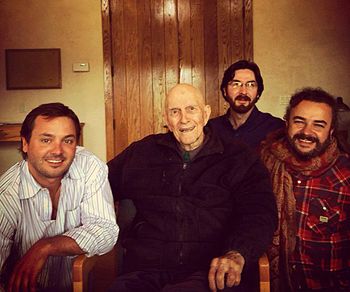 Inspired by the new monastic forms of Bede Griffiths and Raimon Panikkar, and in partnership with Catholic monks Father Thomas Keating and Brother Wayne Teasdale, an "interspiritual" movement of new monasticism has formed around the work of young spiritual leaders and social activists in partnership with traditional monastics. This form of new monasticism is expressed and developed in Rory McEntee and Adam Bucko's The New Monasticism: An Interspiritual Manifesto for Contemplative Life.[17] Other collaborators include Episcopal priest Matthew Wright, Sufi lineage holder Pir Netanel Miles-Yepez, David and Tamara Milliken and their "InnerSky Community", V.K. Harber's work, and others.

Brother Wayne Teasdale coined the word "interspiritual," which he described in his books The Mystic Heart: Discovering a Universal Spirituality in the World’s Religions and A Monk in the World: Cultivating a Spiritual Life as a new orientation of religious and spiritual life with the following elements:[18][19]

The Nine Vows of the New Monastic

In McEntee and Bucko's The New Monasticism: An Interspiritual Manifesto for Contemplative Life,[17] they describe the "Nine Vows of the New Monastic", which were based on Brother Wayne Teasdale's "Nine Elements of Spiritual Maturity"[21] and developed by the Rev. Diane Berke.

"New Monasticism" within the Catholic Church takes many forms and experienced vigorous growth after the Second Vatican Council's call[specify] to encourage the laity to be more involved in religious life. There was then a growth in the number of lay movements linked to religious orders. These lay organisations, such as the Lay (or Third Order) Franciscans, have existed for centuries. They encourage the laity to take on the principles behind certain religious orders and try to live them in the secular world away from the monastery, friary or priory to which the religious community is linked. An example is the Lay Dominicans. They are called to live by the Four Pillars of Dominican life. These are study, prayer, community, and preaching. So Lay Dominicans are encouraged to study the faith regularly, pray and meditate daily, build strong communities of faithful and to evangelise. Whichever religious lay movement someone belongs to, they are encouraged to go on retreat at least once a year to a monastery or friary of that community. Lay groups usually meet once a month in church or in people's homes.

The New Monastic movement within Catholicism[clarification needed] is ubiquitous and significant in numbers. For example, the Dominicans of Ireland website states a worldwide lay membership of 150 000 for their religious institute alone, but these are, like the 14th-century Saint Catherine of Siena or the later Saint Rose of Lima, members of the long-established Third Order of Saint Dominic, known since 1972 as Lay Fraternities of Saint Dominic or Lay Dominicans.

Religious institutes that have associated lay groups include Cistercians, Benedictines, Franciscans, Carmelites, Augustinians, Carthusians and Dominicans. In line with canon 303 of the Code of Canon Law, these "associations whose members share in the spirit of some religious institute while in secular life, lead an apostolic life and strive for Christian perfection under the higher direction of the same institute are called third orders or some other appropriate name". They are not called new monastics, both because of their centuries-old history and because even the religious institutes with which they are associated are not all monastic.