From Infogalactic: the planetary knowledge core
(Redirected from New River Company)
Jump to: navigation, search
For other uses, see New River (disambiguation).
File:New Gauge.jpg
The New Gauge House (1856) where water leaves the River Lea at the start of the New River

The New River is an artificial waterway in England, opened in 1613 to supply London with fresh drinking water taken from the River Lea and from Chadwell Springs and Amwell Springs (which ceased to flow by the end of the 19th century), [1] and other springs and wells along its course.

It starts between Ware and Hertford in Hertfordshire and today travels 20 miles (32 km) down to Stoke Newington. Among the districts it flows through are (from north to south):

Its original termination point was at New River Head near Clerkenwell, Islington, close to the current location of Sadler's Wells theatre — where water from the river was used to flood a large tank to stage an Aquatic Theatre at the beginning of the 19th century.[2] Today by following the New River Path it is possible to walk almost the whole length of the New River from its source between Hertford and Ware to its current destination in Stoke Newington, Hackney. In 1946 the water supply to New River Head was truncated at Stoke Newington with the New River ending at the East Reservoir.[3] The reservoir is managed as the Woodberry Wetlands; a nature reserve and designated Site of Metropolitan Importance. 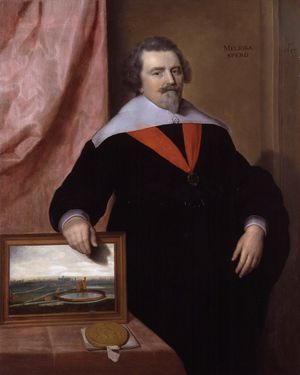 The design and construction of the New River is often attributed solely to Sir Hugh Myddelton. However, an Edmund Colthurst first proposed the idea in 1602, obtaining a charter from King James I in 1604 to carry it out. However, after surveying the route and digging the first two-mile long stretch, Colthurst encountered financial difficulties and it fell to Myddelton to complete the work between 1609 and its official opening on 29 September 1613. The New River Company was founded with the assistance of Sir John Backhouse. The Company's first reservoir was built on his land in Islington. Myddelton gave some of the shares in the New River Company to Colthurst.

The expense and engineering challenges of the project—it relied on gravity to allow the water to flow, carefully following the contours of the terrain from Ware into London, and dropping around just five inches per mile (8 cm/km)—were not Myddelton's only worries. He also faced considerable opposition from landowners who feared that the New River would reduce the value of their farmland (they argued that floods or overflowing might create quagmires that could trap livestock); others were concerned at the possible disruption to road transport networks between Hertfordshire and the capital. Myddelton, however, was strongly supported by the king, who agreed to pay half the project's expenses in return for a 50% shareholding; such backing quickly silenced the scheme's critics.

When it was originally constructed, long sections, for example around Forty Hall and in Hornsey, wound around the heads of small tributary valleys of the Lea. Other sections of the river, including the one in Harringay, were carried across valleys in wooden aqueducts lined with lead and supported by strong timbers and brick piers. In at least one section, locals referred to the river as the boarded river. Improvements in canal making in the 18th century led to these sections being replaced by clay-banked canals.[4]

On 15 October 1940, approximately 150 people were sheltering in the basement of Dame Alice Owen's School, then situated on Goswell Road. A large parachute mine hit the building directly, causing the structure to collapse and blocking access to the basement. The blast wave from the bomb caused the pipeline carrying the New River to rupture, flooding the shelter and killing the majority of the people taking cover.[5]

A memorial to the victims of the bombing stands in Owen's Fields at the northern end of Goswell Road.

Charles Lamb wrote an essay about a friend he calls G. D. (probably the blind poet George Dyer) who walked into the New River by accident. From "Amicus Redivivus" in Essays of Elia:

I do not know when I have experienced a stranger sensation, than on seeing my old friend G.D., who had been paying me a morning visit a few Sundays back, at my cottage at Islington, upon taking leave, instead of turning down the right hand path by which he had entered—with staff in hand, and at noon day, deliberately march right forwards into the midst of the stream that runs by us, and totally disappear. A spectacle like this at dusk would have been appalling enough; but, in the broad open daylight, to witness such an unreserved motion towards self-destruction in a valued friend, took from me all power of speculation.[...]

Waters of Sir Hugh Middleton—what a spark you were like to have extinguished for ever! Your salubrious streams to this City, for now near two centuries, would hardly have atoned for what you were in a moment washing away. Mockery of a river—liquid artifice—wretched conduit! henceforth rank with canals, and sluggish aqueducts. Was it for this, that, smit in boyhood with the explorations of that Abyssinian traveller, I paced the vales of Amwell to explore your tributary springs, to trace your salutary waters sparkling through green Hertfordshire, and cultured Enfield parks?—Ye have no swans—no Naiads—no river God—or did the benevolent hoary aspect of my friend tempt ye to suck him in, that ye also might have the tutelary genius of your waters?

Had he been drowned in Cam there would have been some consonancy in it; but what willows had ye to wave and rustle over his moist sepulture?—or, having no name, besides that unmeaning assumption of eternal novity, did ye think to get one by the noble prize, and henceforth to be termed the STREAM DYERIAN?

Rochemont Barbauld, minister of the nearby Newington Green Unitarian Church and husband of Anna Laetitia Barbauld, went violently insane, attacked his wife, and committed suicide by drowning himself in the New River.

The New River Company became a significant landowner in the Clerkenwell district of Islington. The Company laid out streets and squares which take their name from people and places associated with the company, including Amwell Street, River Street, Mylne Street, Chadwell Street and Myddelton Square.

When London, however, mustered beyond a million inhabitants, even the "New River" failed to give an adequate supply of water to the mouths and the houses which required it, and other companies were formed for the purpose of supplying different parts of London: Chelsea Waterworks and others were started by various companies in succession. This company's water was often by commissions found purer than the others. It was also, due to its source, not impacted by the ban on the supply of drinking water from the tidal Thames under the Metropolis Water Act 1852 from 1 August 1855. After this date the company continued to focus on its quality.

Dr. Frankland's analysis of water supplied to London during the month of October 1876 gave a relative degree of organic impurity compared to a given volume of the Kent Company's water. He also compared the samples from those of August and September. Organic impurity was measured relative to the Kent Water Company's benchmark, who supplied part of London (in areas, in direct competition with the others). The figures were:[6]

The water delivered by the latter five companies, drawing their supply exclusively from the Thames, when compared with that supplied in August and September, showed a marked deterioration in quality. It had a higher proportion of contamination with organic matter.[6]

The New River Company was taken over by the Metropolitan Water Board in 1904 and became part of Thames Water in 1973. The northern part of the New River is still an important link in the supply of water to London.

The Company's former headquarters and laboratory at New River Head on Rosebery Avenue are now private flats; there is public access to a view point over the gardens. 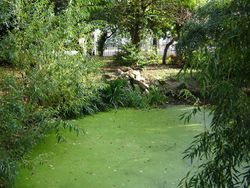 The New River in Clissold Park, Stoke Newington. At this point the river flows underground to emerge south of St Paul's Road in Canonbury. (September 2005)

A winding original section of the channel that used to run through the town centre of Enfield has been cut off from the main flow, but is still maintained as an important local civic amenity, called the New River Loop.

Another large meandering loop originally ran around the Devonshire Hill area in north Wood Green and southern Enfield. This loop was cut off when the Wood Green tunnel, which starts at Bowes Park, was completed in 1852. The loop existed for some decades, but was completely filled in and lost by the early 1900s. Now entirely covered by residential development dating mostly back to the 1930s, its former course is nonetheless visible on numerous maps drawn in the 1800s and early 1900s.

Originally the course was above-ground throughout, but as noted in the second half of the 19th century some sections were put underground, enabling the course to be straightened. The picture (right) shows where the river now disappears underground in Hackney to reappear in Islington. This section used to run along the route of Petherton Road in Highbury and is now culverted. The algal bloom shows how stagnant the water is at this point, most of it being diverted into London's water supply just north of Clissold Park.

The route of the New River now provides an attractive route through Islington. The broad verge down the centre of Petherton Road leads to Essex Road, where another semi-redundant section of the New River's course between Canonbury and Islington town centre forms a picturesque walk alongside the now shallow stream. At Canonbury Road, the walk continues through a fernery to Pleasant Place, where an inscription in the pavement marks the New River's route. At Islington Green, there is a statue of Sir Hugh Myddelton; the route continues along Colebroke Row and Duncan Terrace to the Angel, then through Owen's Fields to Myddelton Square.

The full New River Path is a 28 miles (45 km) long-distance footpath which follows the course of the New River from its source in Hertfordshire to its original end in Islington, London.