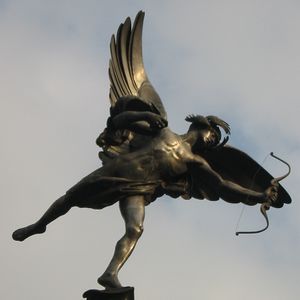 Alfred Gilbert's sculpture for the Shaftesbury memorial in Piccadilly Circus, London, is one of the best-known examples of New Sculpture.

The New Sculpture refers to a movement in late 19th-century British sculpture.

The term "New Sculpture" was coined by the first historian of the movement, the critic Edmund Gosse, who wrote a four-part series for The Art Journal in 1894. After a protracted period of a stylized neoclassicism, sculpture in the last quarter of the century began to explore a greater degree of naturalism and wider range of subject matter. The French sculptor Jules Dalou, in his eight-year English exile after the Paris Commune events in 1871, taught modelling at the South Kensington School of Art, and then at the Lambeth School of Art. He profoundly influenced a new generation of British sculptors, helping to usher in a new approach to the medium.

The catalyst for this development is usually understood to be the exhibition, in 1877, of Frederic Leighton's Athlete Wrestling with a Python. This was Leighton's first major sculpture, and he intended it as a challenge to the prevailing styles of sculpture. It reflected his interest in a more dynamic and vibrant representation of the human body and a shift from easily legible and didactic subject matter. Many sculptors looked to the Athlete and created responses to it in the following years.

The New Sculpture represents an alternate formulation of a new direction for sculpture at the end of the nineteenth century. Whereas the major French alternative to mid-19th-century sculpture, Auguste Rodin, increasingly left the accurate representation of the human body behind, the New Sculptors by and large chose to grapple with issues arising from the naturalistic representation of the body and the detailed rendering of its surface variations. The New Sculpture does not represent one singular style, but rather a range of options developed to make sculpture more vital and lifelike.

A small exhibition dedicated to the New Sculpture was held at Tate Britain during the summer and early autumn of 2010. Works on display included Pandora by Harry Bates, Mother Teaching Child and three small bronzes by Alfred Gilbert, The Singer, Applause and Folly by Edward Onslow Ford, Lycidas by James Harvard Thomas, The Sluggard by Frederic Leighton and The Nymph of Loch Awe by F.W. Pomeroy.

Major figures associated with the New Sculpture include: