From Infogalactic: the planetary knowledge core
Jump to: navigation, search
Not to be confused with New South Wales.
For the residence hall at Georgetown University, see New South Hall. For the Country band, see New South (band). For the literary magazine, see New South (journal). 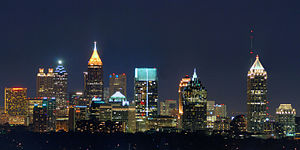 New South, New South Democracy or New South Creed is a slogan in the history of the American South, after 1877. Reformers use it to call for a modernization of society and attitudes, to integrate more fully with the United States, and reject the economy and traditions of the Old South and the slavery-based plantation system of the antebellum period. The term was coined by its leading spokesman and Atlanta editor Henry W. Grady.[1]

The term has been used with different applications in mind. The original use of the term "New South" was an attempt to prescribe an attractive future based on a growing economy. The industrial revolution of the North was the model. The antebellum South was heavily agrarian. After the American Civil War, the South was impoverished and still rural; it was heavily reliant on cotton and a few other crops with low market prices. It seemed to be in great need of urbanization and industrialization. Slavery was abolished, and African Americans played a different role in the New South. Henry W. Grady made this term popular in his articles and speeches as editor of the Atlanta Constitution. Richard Hathaway Edmonds of the Baltimore Manufacturers' Record was another staunch advocate of New South industrialization. The Manufacturers' Record was one of the most widely read and powerful publications among turn of the 20th century industrialists. Historian Paul Gaston coined the specific term "New South Creed" to describe the promises of visionaries like Grady who said industrialization would bring prosperity to the region.[2]

The classic history was written by C. Vann Woodward: The Origins of the New South: 1877–1913, published in 1951 by Louisiana State University Press. Sheldon Hackney, a Woodward student, hails the book but explains:

Of one thing we may be certain at the outset. The durability of Origins of the New South is not a result of its ennobling and uplifting message. It is the story of the decay and decline of the aristocracy, the suffering and betrayal of the poor whites, and the rise and transformation of a middle class. It is not a happy story. The Redeemers are revealed to be as venal as the carpetbaggers. The declining aristocracy are ineffectual and money hungry, and in the last analysis they subordinated the values of their political and social heritage in order to maintain control over the black population. The poor whites suffered from strange malignancies of racism and conspiracy-mindedness, and the rising middle class was timid and self-interested even in its reform movement. The most sympathetic characters in the whole sordid affair are simply those who are too powerless to be blamed for their actions.[3]

The New South campaign was championed by Southern elites often outside of the old planter class, in hopes of making a fresh ("new") start forming partnerships with Northern capitalists in order to modernize and speed the economic development of the South. From Henry Grady to black leader Booker T. Washington, New South advocates wanted southern economic regeneration, sectional reconciliation, racial harmony and believed in the gospel of work.

The rise of the New South involved the continued supremacy of whites over blacks, who had little or no political power. For example, Grady stated in an 1888 speech about the New South: "the supremacy of the white race of the South must be maintained forever, and the domination of the negro race resisted at all points and at all hazards, because the white race is the superior race... [This declaration] shall run forever with the blood that feeds Anglo-Saxon hearts".[4]

The economic woes of the Great Depression dampened much New South enthusiasm as investment capital dried up and the rest of the nation began to view the South as a large economic failure. World War II ushered in a degree of economic prosperity as efforts to industrialize in support of the War effort were employed. In the southern mountains, the Tennessee Valley Authority built dams, and generated employment and electricity that affected numerous residents and manufacturers alike. Other southern industries, such as mining, steel, and ship building flourished during World War II and set the stage for increased industrialization, urban development, and economic prosperity in southern ports and cities in the second half of the 20th century.

The beginnings of the Civil Rights era in the 1960s led to a revival of the term to describe a South which would no longer be held back by Jim Crow Laws and other aspects of compulsory legal segregation. Again, the initially slow pace of civil rights reforms, notably in the areas of school desegregation and voting rights, at first made the "New South" more of a slogan than a description of the South as it actually was; the Civil Rights Act of 1964[5] and the Voting Rights Act of 1965 brought an era of far more rapid change.

For many years, this "New South" was more of a slogan of civic boosters than a reality in many areas. Racist conflicts during the Civil Rights Movement gave the American South a backward image in popular culture. However, in the 1960s the black population began being enfranchised and represented in many political offices. In the post-World War II era, American textiles makers and other light industry moved en masse to the South, so as to capitalize on low wages, social conservatism, and anti-union sentiments.[6] With the industrialization of the South came economic change, migration, immigration and population growth. Light industry moved offshore but has been replaced to a degree by auto manufacturing, tourism and energy production. In light of the many changes that have occurred since the Civil War, many now use the term in a celebratory sense.[citation needed]

For over 100 years, from before the Civil War until the mid-1960s, the Democratic Party exercised a virtual monopoly on Southern politics (see also Solid South). Thus elections were actually decided between Democratic factions in primary elections (often all-white); the Democratic nomination was considered to be tantamount to election.[citation needed]

The "New South" period is double-edged. After the passage of civil rights legislation, African Americans began to vote in number for the Democratic Party. Many had supported Franklin D. Roosevelt's New Deal and Harry S. Truman, John F. Kennedy, and Lyndon B. Johnson had supported their cause. At the same time, in 1964 several Southern politicians, and states, supported Republican Barry Goldwater for President over the Democratic incumbent Lyndon B. Johnson. In what later became a trend, some switched party affiliations, notably Strom Thurmond of South Carolina. Richard Nixon's Southern strategy in the 1968 campaign is thought by many to have vastly accelerated this process. From Nixon's time to the present, the South has generally voted Republican at the presidential level.

The term "New South" has also been used to refer to political leaders in the American South who embraced progressive ideas on education and economic growth and minimized racist rhetoric, even if not promoting integration. This term was most commonly associated with the wave of Southern governors elected in the late 1960s and 1970s, including Terry Sanford in North Carolina, Carl Sanders and Jimmy Carter in Georgia, and Albert Brewer in Alabama.[7][8]

Similarly, the term "New South" was also used to refer to areas of the South that have become more diverse and cosmopolitan over the last several decades.

The "New South" is also meant to describe economic growth in the American South, compared to the economic decline and loss of jobs in the Midwest United States. For example, two of the largest U.S. banks, Bank of America and Wells Fargo, have a major presence in Charlotte, North Carolina. Bank of America is headquartered there, and Wells Fargo has maintained much of the operation of Wachovia after acquiring it in 2008. Charlotte is also home to many other major corporations including Lowe's, Duke Energy, Family Dollar, and Chiquita Brands International.

High-profile companies such as IBM, Intel, Verizon and Microsoft have major corporate presence in the Research Triangle of North Carolina.

Delta Air Lines, one of world's largest airlines, is headquartered in Atlanta, Georgia.[10] Atlanta is also home to many global corporations, including The Coca-Cola Company, UPS, CNN,[11] Mercedes-Benz, and Porsche to name a few.