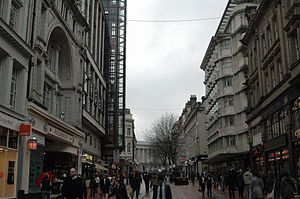 New Street is a street in central Birmingham, England. It is one of the city's principal thoroughfares and shopping streets linking Victoria Square to the Bullring Shopping Centre. It gives its name to New Street railway station, although the station has never had direct access to New Street except via the Pallasades Shopping Centre.

New Street is first mentioned as novus vicus in the surviving borough rental records of 1296, at which point it was partly built upon with burgage plots,[1] but was also the site of most of the few open fields remaining within the borough, including Barlycroft, Stoctonesfeld and Wodegrene.[2] It is mentioned again, this time as le Newestret in the rentals of 1344–45.[3] The street may have been created at the time of the establishment of Birmingham's market in 1166, as a more direct route from the centre of the new town at the Bull Ring to the home of the de Birmingham family's feudal overlords at Dudley Castle.[4]

The street underwent large development during the 18th and 19th century and in an 1840s guide, shortly after the building of the Town Hall it is described as "the Bond Street of Birmingham; what with its glittering array of shops, its inns; its fine Elizabethan School, its School of Arts, its Theatre, its Post-office, it gives the tone to that part of the town."

In 1974, the Birmingham pub bombings took place in two pubs; one on New Street, the other under the Rotunda. A total of 21 people died as a result of their injuries in these blasts.[5] 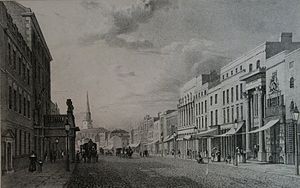 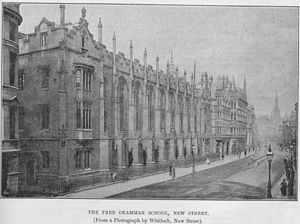 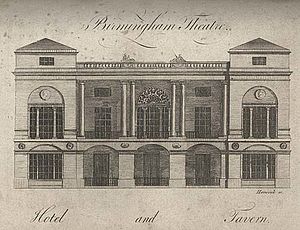 Victoria Square, containing Birmingham Town Hall, the old Post Office building, and Antony Gormley's Iron: Man, is at the western end. The Bull Ring and High Street shopping areas and the Rotunda are at the eastern end.

New Street today is mostly pedestrianised, although commercial vehicles are still permitted to enter. It is a popular shopping area which provides a busy link from Corporation Street to the Bullring Shopping Centre and the High Street. It has many well known retailers including; Primark, JD Sports, Adidas, Jack Wills, Tesco Metro, M Local, BHS, Boots and various other stores. Restaurants include Bella Italia, Café Rouge, Pizza Hut, Pret A Manger, EAT. and Starbucks.

Many of the city's Banks are located up New Street including; Royal Bank of Scotland, Lloyds Bank, NatWest, HSBC and Santander.

A farmers' market occurs on the first and third Wednesday of each month. Every Christmas a Frankfurt market is held on the street and in Victoria Square, its wooden huts selling items such as jewellery, ornaments, clothing and German food.

Bennetts Hill, notable as the birthplace of the artist, Edward Burne-Jones, runs off New Street roughly in the direction of St. Philip's Cathedral.

The Burlington Hotel, formerly known as the Midland Hotel, is located next to the Waterstones bookshop which occupies the former grade II listed Midland Bank building, designed by Edward Holmes and built between 1867 and 1869. In 1875, a five-storey extension of offices was added to the building. The Burlington Arcade, the front area to the Burlington Hotel, underwent a renovation under the design of Malcolm Payne architects who designed a glass roof to cover the area which was once known as Burlington Passage. The lettering of the Midland Hotel is still visible however on the rear of the building fronting Stephenson Street. This was the building where Enoch Powell delivered his controversial 1968 Rivers of Blood speech regarding Commonwealth immigrants.[1]