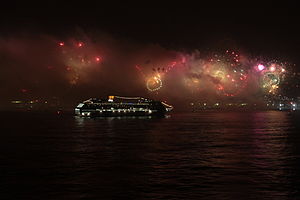 New Year is the time at which a new calendar year begins and the calendar's year count increments by one. Many cultures celebrate the event in some manner.[1] The New Year of the Gregorian calendar, today mostly in use, falls on 1 January (New Year's Day), as was the case both in the old Roman calendar (at least after about 713 BCE) and in the Julian calendar that succeeded it. The order of months was January to December in the Old Roman calendar during the reign of King Numa Pompilius in about 700 BCE, according to Plutarch and Macrobius, and has been in continuous use since that time. Many countries, such as the Czech Republic, Italy, Spain, the UK, and the United States, mark 1 January as a national holiday.

During the Middle Ages in western Europe, while the Julian calendar was still in use, authorities moved New Year's Day variously, depending upon locale, to one of several other days, among them: 1 March, 25 March, Easter, 1 September, and 25 December. These New Year's Day changes generally reverted to using January 1 before or during the various local adoptions of the Gregorian calendar, beginning in 1582. The change from March 25 – Lady Day, one of the four quarter days – to January 1 took place in Scotland in 1600, before the ascension of James VI of Scotland to the throne of England in 1603 and well before the formation of the Kingdom of Great Britain in 1707. In England and Wales (and in all British dominions, including Britain's American colonies), 1751 began on March 25 and lasted 282 days, and 1752 began on January 1.[2] For more information about the changeover from the Julian calendar to the Gregorian calendar and the effect on the dating of historical events etc., see Old Style and New Style dates.

A great many other calendars have seen use historically in different parts of the world; some such calendars count years numerically, while others do not. The expansion of Western culture during recent centuries has seen such widespread official adoption of the Gregorian calendar that its recognition and that of January 1 as the New Year has become virtually global. (Note for example the New Year celebrations held in Dubai to mark the start of 2014, which broke the world record for the most fireworks set off in a single display,[3] lasting for six minutes and including the use of over 500,000 fireworks.)

Nevertheless, regional or local use of other calendars persists, along with the cultural and religious practices that accompany them. Many places (such as Israel, China, and India) also celebrate New Year at the times determined by these other calendars. In Latin America the observation of traditions belonging to various native cultures continues according to their own calendars, despite the domination of recently arrived cultures. The most common dates of modern New Year's celebrations are listed below, ordered and grouped by their alignment relative to the Gregorian calendar.

By month or season 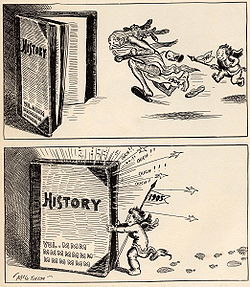 Baby New Year 1905 chases old 1904 into the history books in this cartoon by John T. McCutcheon.

The new year of many South and Southeast Asian calendars falls between 13 and 15 April, marking the beginning of spring.

The early development of the Christian liturgical year coincided with the Roman Empire (east and west), and later the Byzantine Empire, both of which employed a taxation system labeled the Indiction, the years for which began on September 1. This timing may account for the ancient church's establishment of September 1 as the beginning of the liturgical year, despite the official Roman New Year's Day of January 1 in the Julian calendar, because the indiction was the principal means for counting years in the empires, apart from the reigns of the Emperors. The September 1 date prevailed throughout all of Christendom for many centuries, until subsequent divisions eventually produced revisions in some places.

After the sack of Rome in 410, communications and travel between east and west deteriorated. Liturgical developments in Rome and Constantinople did not always match, although a rigid adherence to form was never mandated in the church. Nevertheless, the principal points of development were maintained between east and west. The Roman and Constantinopolitan liturgical calendars remained compatible even after the East-West Schism in 1054. Separations between the Roman Catholic ecclesiastical year and Eastern Orthodox liturgical calendar grew only over several centuries' time.

During those intervening centuries, the Roman Catholic ecclesiastic year was moved to the first day of Advent, the Sunday nearest to St. Andrew's Day (30 November). According to the Latin Rite of the Catholic Church, the liturgical year begins at 4:00 pm on the Saturday preceding the fourth Sunday prior to 25 December (between November 26 and December 2). By the time of the Reformation (early 16th century), the Roman Catholic general calendar provided the initial basis for the calendars for the liturgically-oriented Protestants, including the Anglican and Lutheran Churches, who inherited this observation of the liturgical new year.

The present-day Eastern Orthodox liturgical calendar is the virtual culmination of the ancient eastern development cycle, though it includes later additions based on subsequent history and lives of saints. It still begins on 1 September, proceeding annually into the Nativity of the Theotokos (8 September) and Exaltation of the Cross (14 September) to the celebration of Nativity of Christ (Christmas), through his death and resurrection (Pascha / Easter), to his Ascension and the Dormition of the Theotokos ("falling asleep" of the Virgin Mary, 15 August). (This last feast is known in the Roman Catholic church as the Assumption.) The dating of "1 September" is according to the "new" (revised) Julian calendar or the "old" (standard) Julian calendar, depending on which is used by a particular Orthodox Church. Hence, it may fall on 1 September on the civil calendar, or on 14 September (between 1900 and 2099 inclusive).

The present-day Coptic Orthodox liturgical calendar reflects the same fundamental ancient structures, even though its early break from Eastern Orthodoxy in 452 shows evidence of a separate development. The Coptic calendar is based on the ancient Egyptian calendar, which Emperor Augustus reformed in 25 BC to keep it forever in synch with the Julian calendar, but it is not identical to the Julian calendar. The Coptic liturgical new year, at the feast of Neyrouz, synchronized with the Julian September 1 at a different point from the Gregorian calendar, has therefore a different degree of separation today. Between 1900 and 2099, Neyrouz occurs on 11 September (Gregorian), with the exception of the year before Gregorian leap years, when it occurs on 12 September. (The Coptic year 1731 began in September 2013.) The Ethiopian Orthodox new year, Enkutatash, falls on the same date as Neyrouz. The Ethiopian calendar year 2006 began on 11 September 2013.

During the Roman Republic and the Roman Empire years began on the date on which each consul first entered office. This was probably 1 May before 222 BC, 15 March from 222 BC to 154 BC,[9] and 1 January from 153 BC.[10] In 45 BC, when Julius Caesar's new Julian calendar took effect, the Senate fixed 1 January as the first day of the year. At that time, this was the date on which those who were to hold civil office assumed their official position, and it was also the traditional annual date for the convening of the Roman Senate. This civil new year remained in effect throughout the Roman Empire, east and west, during its lifetime and well after, wherever the Julian calendar continued in use.

In England, the Angle, Saxon, and Viking invasions of the fifth through tenth centuries plunged the region back into pre-history for a time. While the reintroduction of Christianity brought the Julian calendar with it, its use was primarily in the service of the church to begin with. After William the Conqueror became king in 1066, he ordered that 1 January be re-established as the civil New Year.[citation needed] Later, however, England and Scotland joined much of Europe to celebrate the New Year on 25 March.[11]

In the Middle Ages in Europe a number of significant feast days in the ecclesiastical calendar of the Roman Catholic Church came to be used as the beginning of the Julian year:

In 1582, Pope Gregory XIII while reforming the Julian calendar established 1 January as the beginning of a New Year of the Gregorian calendar.

Southward equinox day (usually 22 September) was "New Year's Day" in the French Republican Calendar, which was in use from 1793 to 1805. This was primidi Vendémiaire, the first day of the first month.

It took quite a long time before 1 January again became the universal or standard start of the civil year. The years of adoption of 1 January as the new year are as follows:

Because of the division of the globe into time zones, the new year moves progressively around the globe as the start of the day ushers in the New Year. The first time zone to usher in the New Year, just west of the International Date Line, is located in the Line Islands, a part of the nation of Kiribati, and has a time zone 14 hours ahead of UTC.[18][19][20] All other time zones are 1 to 25 hours behind, most in the previous day (31 December); on American Samoa and Midway, it is still 11 PM on 30 December. These are among the last inhabited places to observe New Year. However, uninhabited outlying U.S. territories Howland Island and Baker Island are designated as lying within the time zone 12 hours behind UTC, the last places on earth to see the arrival of 1 January. These small coral islands are found about midway between Hawaii and Australia, about 1,000 miles west of the Line Islands. This is because the International Date Line is a composite of local time zone arrangements, which winds through the Pacific Ocean, allowing each locale to remain most closely connected in time with the nearest or largest or most convenient political and economic locales with which each associates. By the time Howland island sees the new year, it is 2 AM on 2 January in the Line Islands of Kiribati.