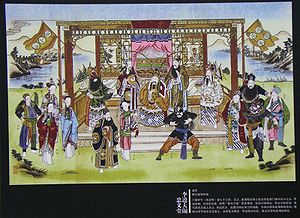 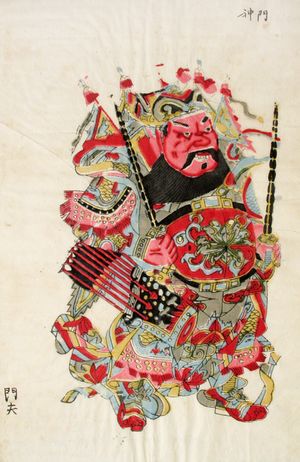 A New Year Picture (Chinese: 年画) (Pinyin: Nían Hùa; literally "Year Picture") is a popular Banhua in China. It is a form of Chinese colored woodblock print, for decoration during the Chinese New Year Holiday, then later used to depict current events.

Its original form was a picture of a door god fashioned during the Tang dynasty. Later, more subjects, such as fairs, the Kitchen God, women and babies were included. Customarily, as each Chinese New Year arrives, every family replaces its New Year picture in order to "say goodbye to the Past and welcome the Future" (Chinese: 辞旧迎新).

In the 19th century Nianhua were mass-produced and displayed for those who could not read. They often depicted the Chinese point of view of events.[1]

The scenes sometimes were used to create patriotic sentiment. Many Nianhua were produced during the Boxer Rebellion depicting the Muslim Kansu Brave forces of General Dong Fuxiang, showing them as victorious over the Eight Nation Alliance of the western powers and Japan.[2]

The most famous production places for New Year Pictures in China are Sichuan,[3] Tianjin,[4] Shandong,[5] and Suzhou.[6] Among the best four, Yangliuqing,[7] from Tianjin was regarded as the greatest. Yanliuqing’s paintings were first produced between 1573 and 1620.

The New Year Pictures in Sichuan were mostly come from Mianzhu. Mianzhu’s New Year Pictures are different from other places’. The particular rules require symmetry, completeness, equilibrium, clarity and a moral meaning. It originates from earlier Song Dynasty and booming in late Ming and early Qing Dynasty. In its prosperous time, there were more than 300 workshops in Mianzhu. In addition, the production were transported and sold not only in different parts of China, but also sold to India, Japan and other countries.[original research?]

As times changed, people, especially those in cities, were influenced by modern arts to see New Year Pictures as traditional and staid. Moreover, people considered the door god was too menacing to hang in their homes. They wanted something more artistic. At the middle of the 1980s, the sales amount of New Year Pictures in Mianzhu was around five hundred thousand. However, the number dropped sharply since the early 1990s.[original research?]

Secondly, carving the rough sketch on the wood board and print few sample

Finally, when the preparation is complete. The printer paint color on the color board before carved, then put paper on the wood board and use brush to flat brush the paper. Then the Chromatic woodblock New Year picture is complete.[8] 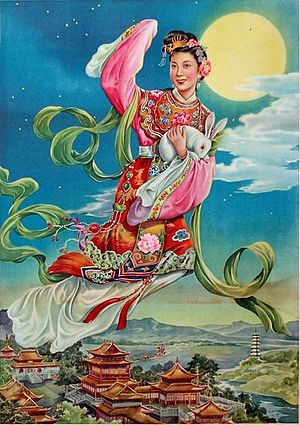 1. The Immortals and mascot

3. The baby and beauty

4. The story and myth

1. The gods and mascot

The folk artists through their own observation and feelings to show what the real life is, this kind of subject matter less than the other subjects in the New Year pictures. Topics include people of interest-bearing work of secular life, festive customs, current affairs anecdotes, etc.

3. The baby and beauty

The subject matter in a large proportion in the folk New Year pictures, expressed the people early birth, husband and wife and good will.

4. The story and myth

This part is mostly based on historical events, folk stories, myths, legends, notes novel and drama, the drama theme proportion is the largest. People often through such subjects increased knowledge, and accept the traditional moral education.[9]

According to the color level, the New Year picture can be divided into monochrome pictures, posters, color posters and black and white printing.

New Year picture usually print with simple lines and bright and warm color. Also make people feeling happy. The art of New Year picture have very long history in china, but also reflects the history of Chinese society, life, beliefs and customs. Every Lunar New Year, people bought few pictures posted on the door, and almost every home is same. Every family, from the front door to the private room and all covered with a variety of colorful symbol of auspicious and wealth of New Year picture. The reason of the Chinese New Year filled with happily and lively, the New Year picture is a main element and also the New Year pictures is an important role in the New Year.

New Year picture is not only a kind of colorful decoration. It's a kind of cultural circulation, education of moral, a kind of Chinese art. Also is a kind of visual public readings. For the kind of events of the theme, it's also a kind of media.[11]