Under the "Total Force" concept, New York Air National Guard units are considered to be Air Reserve Components (ARC) of the United States Air Force (USAF). New York ANG units are trained and equipped by the Air Force and are operationally gained by a Major Command of the USAF if federalized. In addition, the New York Air National Guard forces are assigned to Air Expeditionary Forces and are subject to deployment tasking orders along with their active duty and Air Force Reserve counterparts in their assigned cycle deployment window.

Along with their federal reserve obligations, as state militia units the elements of the New York ANG are subject to being activated by order of the Governor to provide protection of life and property, and preserve peace, order and public safety. State missions include disaster relief in times of earthquakes, hurricanes, floods and forest fires, search and rescue, protection of vital public services, and support to civil defense.

The New York Air National Guard is the largest and most diverse ANG organization established by the National Guard Bureau. Its consists of the following major units:

Established 18 October 1948 (as: 139th Fighter Squadron); operates: LC-130H Hercules
Stationed at: Stratton Air National Guard Base, Schenectady; Gained by: Air Mobility Command
The 109th Airlift Wing's mission is to provide airlift support to the National Science Foundation's South Pole research program by flying specialized LC-130H Hercules airlifters, modified with wheel-ski gear, in support of Arctic and Antarctic operations. The 109th Airlift Wing is the only unit in the world to fly these aircraft.[4]

Located at Hancock Field, Syracuse, the mission of the 152d AOG is the operation of the Theater Battle Management Core Systems (TBMCS). TBMCS is a set of software systems used by the Joint Forces Air Component Commander (JFACC) and within Air Operations Centers by the United States Air Force combat forces to plan and execute military missions utilizing airborne resources. It has two levels of control, at the larger 'force' level, or at the detailed 'unit' level. It is used to generate the Air Tasking Order (ATO). It replaced the Contingency Theater Automated Planning System (CTAPS).

Located at Rome, NY, the unit's origins date to 1956 as the 4621st Air Defense Wing. It is one of two sectors that carries out NORAD's aerospace warning and control mission. The Eastern Air Defense Sector is part of the U.S. Continental NORAD Region. There are also Canadian and Alaskan NORAD regions. This unit also provides direct support for the annual NORAD Tracks Santa program.[6] 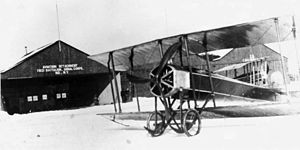 The Militia Act of 1903 established the present National Guard system, units raised by the states but paid for by the Federal Government, liable for immediate state service. If federalized by Presidential order, they fall under the regular military chain of command. On 1 June 1920, the Militia Bureau issued Circular No.1 on organization of National Guard air units.[7]

The New York Air National Guard origins date to 28 August 1917 with the establishment of the 102d Aero Squadron as part of the World War I American Expeditionary Force. Its origins begin however, on 30 April 1908 as the 1st Aero Company, a pre-World War I independent unit of the New York National Guard. The 1st Aero Company was provisionally recognized by the federal government in June 1916 and called to active duty between July 13, 1916, and November 15, 1916, to continue training with the purpose of joining the 1st Aero Squadron, a Regular Army unit deployed to Mexico with the Punitive Expedition. The 1st Aero Company, however, never left Long Island and was disbanded on May 23, 1917, shortly after the United States entered World War I, when the Army decided not to use national guard aviation units in the war effort. Its history and lineage were bestowed on the 102d Observation Squadron. The 102d Aero Squadron was demobilized 1918 Armistice with Germany in 1919. 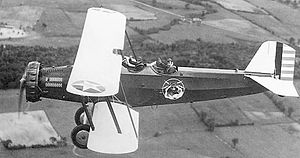 Its operations were primarily air transportation and aircraft repair and maintenance. However, squadron elements were called up periodically by the state of New York to perform emergency duties that included reconnaissance for the Treasury Department of vessels conducting illegal-liquor trade off the New York-New Jersey coast in the 1920s; support of flood relief efforts in Vermont 6–16 November 1927; aid to civil authorities during a prison break from the maximum security Auburn Prison, 11–12 December 1930; and flood relief efforts in upstate New York 11–13 July 1935.

The 102d Observation Squadron was ordered into active service on 15 October 1940 as part of the buildup of the Army Air Corps prior to the United States entry into World War II. 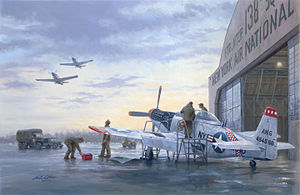 The modern New York ANG received federal recognition on 20 February 1947 as the 102d Bombardment Squadron (Light) at Floyd Bennett Field, Brooklyn. It was equipped with B-26 Invaders and was assigned to Tactical Air Command. 18 September 1947, however, is considered the Alabama Air National Guard's official birth concurrent with the establishment of the United States Air Force as a separate branch of the United States military under the National Security Act.[8] 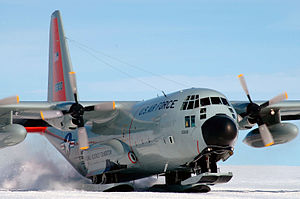 At the end of October 1950, the ANG converted to the wing-base (Hobson Plan) organization. As a result, the 52d Fighter Wing was withdrawn from the New York ANG and inactivated on 31 October 1950. The 106th Bombardment Wing at Brooklyn, and the 107th Fighter Wing at Niagara Falls were formed and were simultaneously allotted to the NY ANG and activated to replace the 52d.

Today, the New York Air National Guard is the largest and most diverse ANG organization of the National Guard Bureau. After the September 11th, 2001 terrorist attacks on the United States, elements of every Air National Guard unit in New York has been activated in support of the Global War on Terrorism. Flight crews, aircraft maintenance personnel, communications technicians, air controllers and air security personnel were engaged in Operation Noble Eagle air defense overflights of major United States cities. Also, New York ANG units have been deployed overseas as part of Operation Enduring Freedom in Afghanistan and Operation Iraqi Freedom in Iraq as well as other locations as directed.