New York Military Academy (NYMA) is a private boarding school in the rural village of Cornwall-on-Hudson, 60 miles (97 km) north of New York City, and one of the oldest military schools in the United States. Originally a boys' school, it became coeducational in 1975. On March 3, 2015, NYMA filed for Chapter 11 bankruptcy protection, facing serious financial difficulties from low enrollment. Instead of opening for the fall semester in September 2015, NYMA closed and was auctioned to a group of Chinese investors who reopened the school in November.

NYMA has a long history as a university-preparatory school with a military structure that enrolls students from the New York metropolitan area as well as around the country and the world.

NYMA was founded in 1889 by Charles Jefferson Wright, an American Civil War veteran and former schoolteacher from New Hampshire who believed that a military structure provided the best environment for academic achievement, a philosophy to which the school still adheres. Wright's successor, Sebastian Jones, presided over the academy from 1894 to 1922, guiding it during its most critical period of growth from a young and small institution of 48 cadets, through a disastrous fire in 1910, and throughout an extensive reconstruction program.[3]

It previously admitted students in fifth grade but later only accepted students from the eighth grade.

NYMA is one of the oldest and best-known military schools in the United States.[citation needed] Over time, the campus expanded from 30 acres (12 ha) to a peak of 550 acres (220 ha), and enrollment peaked at 525 students during the 1960s. Girls have been admitted since 1975. NYMA is a member of the Association of Military Colleges and Schools of the United States as well as several other school associations.

Due to financial problems and enrollment that had dwindled to 145 students, the school was scheduled to close in June 2010.[4][5] However, a group of alumni and local businesspeople created a plan to save the school, raising almost $6 million of financing in a matter of weeks, and expecting to sell off some less-utilized portions of the campus.[6][7] Under newer board leadership, the vision for NYMA's future held that the academy would be a "best practice" school, providing 21st-century educational programs for intentional learners, in a student-centered constructivist environment that served the developmental learning needs and service-related aspirations of each individual cadet.

As of March 3, 2015, however, NYMA filed for Chapter 11 bankruptcy protection.[8][9] Court documents stated that NYMA's debts (over $10 million) and recent very low enrollment numbers (under 100 cadets) were key motivating factors in the decision.[10] In response to the bankruptcy proceedings and issues related to the availability of payroll funds, NYMA closed to all cadets from March 16 to March 18, 2015.[11] NYMA soon reopened but announced on April 2 that future extracurricular activities for students, including those involving graduation, would be limited or cancelled. At an April 11 meeting, alumni pledged major increases in funding and enrollment to sustain NYMA, much as they had five years prior.[12]

The academy failed to open in September 2015 for the fall semester, and instead headed to bankruptcy auction.[13] On September 30, NYMA was auctioned for $15.825 million to a group of Chinese investors, who reopened the school on November 2 with "a handful of returning students" and a recruitment drive.[14][15] 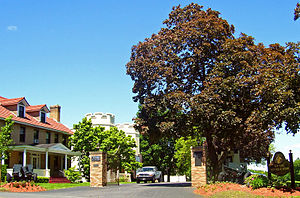 The school is located in the town of Cornwall, New York, and uses the mailing address of the village Cornwall-on-Hudson despite being just outside its official boundary.[16] Geographically, the academy is in the Hudson Highlands, at the foot of Storm King Mountain, just west of the Hudson River and 6 miles (10 km) north of West Point. NYMA is approximately 60 miles (97 km) north of New York City, or about one hour by car. This places NYMA in the Mid-Hudson region of the Hudson Valley, which is accessible by airplane (KSWF, KEWR, KLGA, KJFK, KALB) as well as train (Amtrak and Metro-North), bus, and automobile.

NYMA strives to provide its students with a structured environment, placing an emphasis on leadership development. Although recently 80% of the Corps of Cadets has come from the Tri-State area (NY, NJ, CT), there has been a large and growing mix of international students who enjoy the local activities that Cornwall-on-Hudson and the region can offer.

The days at NYMA typically begin at 6:00 am and end at 10:00 pm. Cadets attend grade-specific classes during that time and also participate in organized or intramural sports, activities, and study hall. During closed weekends, cadets are expected to attend additional leadership training, drill & ceremony, and maintain the appearance of their respective barracks. Upon gaining the opportunity for an open weekend, cadets in good academic standing can apply for weekend furlough.[17] Along with Academics, Athletics, and Leadership, the fourth "pillar" of cadet life is Character, reinforced continually by the Cadet Honor Code that NYMA shares with West Point.[18] 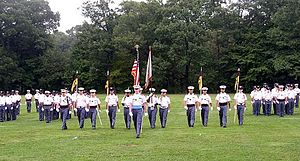 The structure of the Corps of Cadets is adjusted depending on the number of students enrolled at the academy. As a military school, the Junior Reserve Officers' Training Corps (JROTC) is a key component, and participation is required to graduate.[1] The battalion has typically consisted of:

At one time, the Corps of Cadets consisted of two battalions organized into a brigade.[citation needed]

In earlier decades, NYMA's official regulations permitted a certain level of hazing and physical discipline by supervisors and older cadets, though the academy's senior administrators were forced to resign after a particularly severe incident in 1964.[20][21][22] While hazing later became forbidden by the school's rules and policies, a lawsuit was settled in which it had been claimed that physical and emotional abuse in the form of hazing had taken place in 2005.[23] NYMA cited adverse publicity from the 2005 incident as one of the reasons the school nearly closed in 2010.[24] 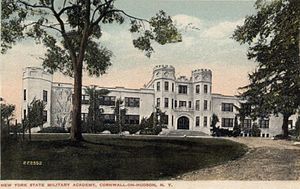