Newark is a city in and the county seat of Licking County, Ohio, United States,[6] 33 miles (53 km) east of Columbus, at the junction of the forks of the Licking River. The population was 47,573 at the 2010 census[7] which makes it the 20th largest city in Ohio.

In terms of population, Newark is the second-largest Newark in the United States, after Newark, New Jersey. It is part of the Columbus, Ohio metropolitan area.

There were 19,840 households of which 30.8% had children under the age of 18 living with them, 40.7% were married couples living together, 14.8% had a female householder with no husband present, 5.3% had a male householder with no wife present, and 39.2% were non-families. 31.9% of all households were made up of individuals and 12.3% had someone living alone who was 65 years of age or older. The average household size was 2.35 and the average family size was 2.94. 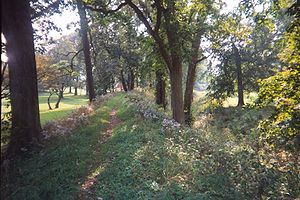 A further section of the Great Circle

Indigenous peoples lived along the river valleys for thousands of years before European contact. From more than two thousand years ago, 100 BC to 500 AD, people of the Hopewell culture transformed the area of Newark. They built many earthen mounds and enclosures, creating the single largest earthwork complex in the Ohio River Valley. The Newark Earthworks, designated a National Historic Landmark, have been preserved to document and interpret the area's significant ancient history. The earthworks cover several square miles. The Observatory Mound, Observatory Circle, and the interconnected Octagon earthworks span nearly 3,000 feet (910 m) in length. The Octagon alone is large enough to contain four Roman Coliseums. The Great Pyramid of Giza in Egypt would fit precisely inside Observatory Circle. The even larger 1,180-foot (360 m)-diameter Newark Great Circle is the largest circular earthwork in the Americas. The 8 feet (2.4 m)-high walls surround a 5 feet (1.5 m)-deep moat. At the entrance, the walls and moat are of greater and more impressive dimensions.

In addition, the remains of a road leading south from the Octagon have been documented and explored. It was first surveyed in the 19th century, when its walls were more apparent. Called the Great Hopewell Road, it may extend 60 miles (97 km) to the Hopewell complex at Chillicothe, Ohio. It was surveyed at least six miles (10 km) south of the Octagon, and can be seen on photographs and with LiDAR (Light Detection and Ranging) sensing technology south of that.[13]

Contemporary archaeogeodesy and archaeoastronomy researchers have demonstrated that the Hopewell and other prehistoric cultures had advanced scientific understandings which they used to create their earthworks for astronomical observations, markings and celebrations. Researchers analyzed the placements, alignments, dimensions, and site-to-site interrelationships of the Hopewell earthworks to understand what had been done. Today, the Ohio Historical Society preserves the Great Circle Earthworks in a public park near downtown Newark, called Mound Builders Park (or the Newark Earthworks) located at 99 Cooper Ave, Newark, Ohio. The area of the Octagon Earthworks had been leased to a country club, but new arrangements in 1997 provide for more public access to it.

Later American Indian tribes inhabiting the area at the time of European contact were distant descendants of the earlier peoples.

After exploration by traders and trappers in earlier centuries, the first European-American settlers arrived in 1802, led by Gen. William C. Schenck. He named the new village after his New Jersey hometown. Later public improvements led to growth in the town, as it was linked to major transportation and trade networks. On July 4, 1825, Governors Clinton of New York and Morrow of Ohio dug the first shovelfuls of dirt for the Ohio and Erie Canal project, at the Licking Summit near Newark, Ohio. On April 11, 1855, Newark became a stop along the Pittsburgh, Cincinnati, Chicago and St. Louis Railroad that connected Pittsburgh to Chicago and St. Louis. On April 16, 1857, the Central Ohio Railroad connected Newark west to Columbus, and later Newark maintained a station on the Baltimore and Ohio Railroad.

The Heisey Glass Company started in Newark in 1895. The factory operated there for 62 years, until the company's demise in 1957 due to changing tastes. The National Heisey Glass Museum, operated by the Heisey Collectors of America, Inc., is located on Sixth Street in Newark.

In 1909, The Arcade was opened. Modeled after innovative European buildings, it became one of Newark's first successful retail emporiums. Later versions became known as shopping malls. At 60,000 square feet (5,600 m2), the Arcade is one-third the size of an average modern Wal-Mart. The original architecture provides a beautiful setting that attracts shoppers to its businesses.

The main shopping center in the area is the Indian Mound Mall (located in nearby Heath). The mall is named after the world-famous Indian earthworks built 2,000 years ago by the Hopewell Indians of central Ohio.[15] Both earthworks are located less than a mile away from the shopping mall named for them.

Newark City School District serves the city of Newark. Newark High School consists of nearly 2,000 students and competes at the OHSAA D1 level. Newark High School has a storied tradition in Academics and Sports, as well as Performing Arts. Newark High School has won 4 OHSAA Basketball titles (36', 38', 43', 08') and 3 AP Football titles. The Pride of Newark Marching Band has made an unprecedented 35 consecutive years to the OMEA state finals. The Newark High School Sinfonia, under the direction of Susan Larson, tied for first runner-up at the National Orchestra Cup in New York City on April 5, 2009. The Sinfonia was featured in a front-page article of the April 14, 2009, edition of The New York Times, and received an invitation to the White House in the fall of 2009. Their Concert Choir recently sang in Italy and was sponsored by Disney. Under the direction of Kimberly & Michael Wigglesworth, the choir has qualified for OMEA Choir state Finals for the past 15 years. A regional campus of Ohio State University is also located in the city. The Ohio State University, Newark Campus, founded in 1957, schools just over 2,000 students, primarily serving as a bridge to the main campus in Columbus. The campus also shares its establishment with a two-year technical college, COTC (Central Ohio Technical College). Newark is also home to a number of private religious schools, including Blessed Sacrament School, St. Francis de Sales School and Newark Catholic High School. C-TEC ([Career & Technology Education Centers of Licking County]) offers high school and adult programs. 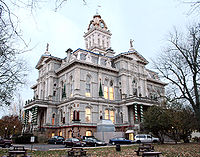