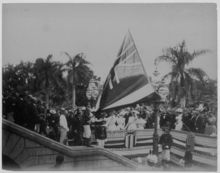 220px
On August 12, 1898, the Flag of Hawaii over ʻIolani Palace was lowered and the United States flag raised to signify annexation.

The Newlands Resolution was a joint resolution passed on July 4, 1898 by the United States Congress to annex the independent Republic of Hawaii. In 1900, Congress created the Territory of Hawaii. It was drafted by Congressman Francis G. Newlands of Nevada, a Democrat. Annexation was a highly controversial political issue along with the similar issue of the acquisition of the Philippines in 1898.

In 1897 President William McKinley signed the treaty of annexation for the Republic of Hawaii. It failed to gain two thirds support in the Senate, with only 46 out of 90 senators voting yes. In April 1898, the United States went to war with Spain, and Republic of Hawaii declared its neutrality. In practice, it gave enormous support to the United States, demonstrating its value as a naval base in wartime, and winning widespread American approval for its non-neutral behavior.[1] With the opposition weakened, Hawaii was supposedly annexed by means of the Newlands Resolution, a domestic congressional law, which required only majority vote in both houses, and no input from Native Hawaiians. Most of the support came from Republicans. It passed the house by a vote of 209 to 91; the yeas included 182 Republicans. It was approved on July 4, 1898 and signed on July 7 by McKinley. On August 12 a ceremony was held on the steps of ʻIolani Palace to signify the official transfer of Hawaiian sovereignty to the United States. The majority of Hawaiian citizens did not recognize the legitimacy of this event and did not attend.[2]

The Newlands Resolution established a five-member commission to study which laws were needed in Hawaii. The commission included: Territorial Governor Sanford B. Dole (R-Hawaii Territory), Senators Shelby M. Cullom (R-IL) and John T. Morgan (D-AL), Representative Robert R. Hitt (R-IL) and former Hawaii Chief Justice and later Territorial Governor Walter F. Frear (R-Hawaii Territory). The commission's final report was submitted to Congress for a debate which lasted over a year. Congress raised objections that establishing an elected territorial government in Hawaii would lead to the admission of a state with a non-white majority. Annexation allowed duty-free trade between the islands and the mainland, and made the existing American military presence permanent.

The Spanish–American War forced the annexation issue. President Benjamin Harrison had submitted a treaty to annex the Hawaiian Islands to the United States Senate for ratification.[3]

The United States assumed $4 million in Hawaiian debt as part of the annexation. David R. Barker of the University of Iowa stated in 2009 that unlike the Alaska Purchase, Hawaii has been profitable for the country, with net tax revenue almost always exceeding non-defense spending. Barker did not take into account the value of Alaska's crude oil, nor the amount of social welfare aid paid to native Hawaiians nor does his data parse out the value of taxes paid by those who already were U.S. citizens rather than native Hawaiians, as many U.S.-citizen-owned sugar plantaions were Hawaii's main taxable industry. Barker estimated an internal rate of return for the annexation of more than 15%.[8]

Multiple viewpoints in the United States and in Hawaii were raised for and against annexation from 1893 to 1898. Historian Henry Graff says that at first, "Public opinion at home seemed to indicate acquiescence...."Unmistakably, the sentiment at home was maturing with immense force for the United States to join the great powers of the world in a quest for overseas colonies."[9]

President Grover Cleveland, on taking office in March 1893, rescinded the annexation proposal. His biographer Alyn Brodsky argues It was a deeply personal conviction on Cleveland's part to an immoral action against the little kingdom:

Just as he stood up for the Samoan Islands against Germany because he opposed the conquest of a lesser state by a greater one, so did he stand up for the Hawaiian Islands against his own nation. He could have let the annexation of Hawaii move inexorably to its inevitable culmination. But he opted for confrontation, which he hated, as it was to him the only way a weak and defenseless people might retain their independence. It was not the idea of annexation that Grover Cleveland opposed, but the idea of annexation as a pretext for illicit territorial acquisition.[10]

Blount seems to been unaware of the written policy set in Cleveland's first term by his Secretary of State Thomas F. Bayard for Hawaii. Bayard sent written instructions to the American minister George W. Merrill that in the event of another revolution in Hawaii, it was a priority to protect American commerce, lives and property. Bayard specified, "the assistance of the officers of our Government vessels, if found necessary, will therefore be promptly afforded to promote the reign of law and respect for orderly government in Hawaii." In July 1889, there was a small scale rebellion, and Minister Merrill landed Marines to protect Americans; the State Department explicitly approved his action. Stevens had read those 1887 instructions and followed them in 1893.[11][12]

Cleveland had to mobilize support from Southern Democrats to fight the treaty. He sent former Georgia Congressman James H. Blount as a special representative to Hawaii to investigate and provide a solution. Blount was well known for his opposition to imperialism. Blount was also a leader in the white supremacy movement that in the 1890s was ending the right to vote by southern Blacks. Some observers speculated he would support annexation on grounds of the inability of the Asiatics to govern themselves. Instead, Blount opposed imperialism and called for the US military to restore Queen Liliuokalani. He argued that the Hawaii natives should be allowed to continue their "Asiatic ways."[13]

A vigorous nationwide anti-expansionist movement, organized as the American Anti-Imperialist League, emerged that listened to Cleveland and Carl Schurz, as well as Democratic leader William Jennings Bryan, industrialist Andrew Carnegie, author Mark Twain and sociologist William Graham Sumner, and many prominent intellectuals and politicians who came of age in the Civil War.[14] The anti-imperialists opposed expansion, believing that imperialism violated the fundamental principle that just republican government must derive from "consent of the governed." The League argued that such activity would necessitate the abandonment of American ideals of self-government and non-intervention—ideals expressed in the Declaration of Independence, George Washington's Farewell Address and Lincoln's Gettysburg Address.[15]

However, the Antis could not stop the even more energetic forces of imperialism. They were led by Secretary of State John Hay, naval strategist Alfred T. Mahan, Republican congressman Henry Cabot Lodge, Secretary of War Elihu Root, and young politician Theodore Roosevelt. These expansionist had vigorous support from newspaper publishers William Randolph Hearst and Joseph Pulitzer, whipping up popular excitement. There was deep concern that a Japanese takeover of Hawaii was inevitable, and would pose a serious threat to the West Coast.[16] Mahan and Roosevelt designed a global strategy calling for a competitive modern navy, Pacific bases, an isthmian canal through Nicaragua or Panama, and, above all, an assertive role for America as the largest industrial power.[17] President McKinley's position was that Hawaii could never survive on its own. It would quickly be gobbled up by Japan--already a fourth of the islands' population was Japanese. Japan would then dominate the Pacific and undermine American hopes for large-scale trade with Asia.[18]