From Infogalactic: the planetary knowledge core
Jump to: navigation, search
For other uses, see Newnham.

Newnham College is a women-only constituent college of the University of Cambridge, England.

The college was founded in 1871 by Henry Sidgwick, and was the second Cambridge college to admit women after Girton College. The co-founder of the college was Millicent Garrett Fawcett.

The progress of women at Cambridge University owes much to the pioneering work undertaken by the philosopher Henry Sidgwick, fellow of Trinity. Lectures for Ladies had been started in Cambridge in 1870, and such was the demand from those who could not travel in and out on a daily basis that in 1871 Sidgwick, one of the organisers of the lectures, rented a house on Regent Street in which young women attending the lectures could reside. He persuaded Anne Clough, who had previously run a school in the Lake District, to take charge of this house.

Demand continued to increase and the supporters of the enterprise formed a limited company to raise funds, lease land and build on it. Newnham Hall opened its doors in 1875 and became the first building on the site off Sidgwick Avenue where Newnham still remains.[1] The demand from prospective students remained buoyant and the Newnham Hall Company built steadily, providing three more halls, a laboratory and a library, in the years up to the First World War.

The architect Basil Champneys was employed throughout this period and designed the buildings in the Queen Anne style to much acclaim, giving the main college buildings an extraordinary unity. These and later buildings are grouped around beautiful gardens, which many visitors to Cambridge never discover, and, unlike most Cambridge colleges, students may walk on the grass for most of the year.

Many young women in mid-19th century England had no access to the kind of formal secondary schooling which would have enabled them to go straight into the same university courses as the young men - the first Principal Anne Jemima Clough herself was never a pupil in a school. So Newnham's founders allowed the young women to work at and to a level which suited their attainments and abilities. Some of them, with an extra year's preparation, did indeed go on to degree-level work. And as girls' secondary schools were founded in the last quarter of the 19th century, staffed often by those who had been to the women's colleges of Cambridge, Oxford and London, the situation began to change. In 1890 the Newnham student Philippa Fawcett was ranked above the Senior Wrangler, i.e. top in the Mathematical Tripos. By World War I the vast majority of Newnham students were going straight into degree level courses.

In tailoring the curriculum to the students, Newnham found itself at odds with the other Cambridge college for women, Girton, founded at the same time. Emily Davies, Girton's founder, believed passionately that equality could only be expressed by women doing the same courses as the men, on the same time-table. This meant that Girton attracted a much smaller population in its early years. But the Newnham Council held its ground, reinforced by the commitment of many of its members to educational reform generally and a wish to change some of the courses Cambridge was offering to its men.

Women in the university 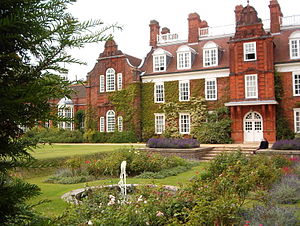 Sidgwick Hall and the Sunken Garden.

The university as an institution at first took no notice of these women and arrangements to sit examinations had to be negotiated with each examiner individually. In 1868 Cambridge's Local Examinations Board (governing non-university examinations) allowed women to take exams for the first time. Concrete change within the university would have to wait until the first female colleges were formed, and following the foundation of Girton College (1869) and Newnham (1872) women were allowed into lectures, albeit at the discretion of the lecturer. By 1881, however, a general permission to sit examinations was negotiated. A first attempt to secure for the women the titles of their degrees, not just a certificate from their colleges, was rebuffed in 1887 and a second try in 1897 went down to even more spectacular defeat. Undergraduates demonstrating against the women and their supporters did hundreds of pounds worth of damage in the market square.

The First World War brought a catastrophic collapse of fee income for the men's colleges and Cambridge and Oxford both sought state financial help for the first time. This was the context in which the women tried once more to secure inclusion, this time asking not only for the titles of degrees but also for the privileges and involvement in university government that possession of degrees proper would bring. In Oxford this was secured in 1920 but in Cambridge the women went down to defeat again in 1921, having to settle for the titles - the much-joked-about BA tit - but not the substance of degrees. This time the male undergraduates celebrating victory over the women used a handcart as a battering ram to destroy the lower half of the bronze gates at Newnham, a memorial to Anne Jemima Clough.

The women spent the inter-war years trapped on the threshold of the university. They could hold university posts but they could not speak or vote in the affairs of their own departments or of the university as a whole. Finally, in 1948 the women were admitted to full membership of the university, although the university still retained powers to limit their numbers. National university expansion after the Second World War brought further change. In 1954, a third women's college, New Hall, (now Murray Edwards College), was founded. In 1965 the first mixed graduate college, Darwin, was founded. The 1970s saw three men's colleges (Churchill, Clare and King's) admit women for the first time. Gradually Cambridge was ceasing to be 'a men's university although of a mixed type', as it had been described in the 1920s in a memorably confused phrase. Cambridge now has no all-male colleges and Girton is also mixed. Newnham, Murray Edwards and Lucy Cavendish remain all-female.

Argent, on a chevron azure between in chief two crosses botonny fitchy and in base a mullet sable, a griffin's head erased or between two mascles of the field.

These arms, granted in 1923, were designed by the Revd E.E. Dorling to incorporate charges from the arms of those intimately connected with the founding of the college.

The history of Newnham begins with the formation of the Association for Promoting the Higher Education of Women in Cambridge, in 1869. A house of residence was opened in 1871 in Regent Street where there were five students under the care of Miss A.J. Clough. As the number grew, the community moved first to Merton Hall, then to premises in Bateman Street, and then with the foundation of the Newnham Hall Company in 1875 into what is now the Old Hall of Newnham College.

The college formally came into existence in 1880 with the amalgamation of the Association and the Company. Women were admitted to titles of degrees from 1881. In 1948 Newnham, like Girton, attained the full status of a college of the university. In the early years of the college Miss A.J. Clough was the principal. She came of the family of Clough of Plas Clough, Denbighshire, which bore: Azure, between three mascles a greyhound's head couped argent. The out-students were under the care of Miss Marion Kennedy. She bore: Argent, a chevron gules between in chief two crosses botonny fitchy sable and in base a boar's head couped sable langued gules - a coat slightly differing from that of Kennedy of Kirkmichael, Ayrshire, which has crosses crosslet fitchy.

The other great benefactors of the college were Mr (later Professor) Henry Sidgwick, and Miss E.M. Balfour, whom he married in 1876. Mrs Sidgwick later became a principal of one of the halls of Newnham College. Their arms were - Sidgwick (assumed arms): Gules, a fess between three griffins' heads erased or; and Balfour (of Balbirnie): Argent, on a chevron engrailed between three mullets sable an otter's head erased argent.

In the college arms the chevron links them with the coats of Balfour and Kennedy, while its colour and the mascles refer to Clough. The crosses come from Kennedy, the mullet from Balfour, and the griffin's head from Sidgwick. No crest was granted, for although a corporate body may have a crest, it was thought that a crest and helm would be inappropriate to one composed entirely of women. 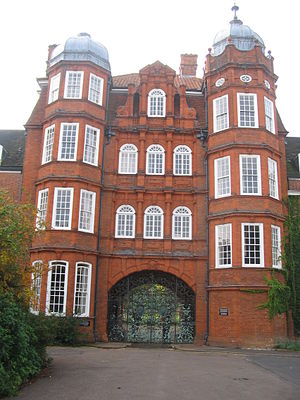 Set in acres of gardens, Newnham students' rooms are often filled with antiques – writing bureaus, fireplaces, carved dining tables and chests of drawers are common pieces of furniture. It is said that Basil Champney deliberately designed what has now become the second longest continuous indoor corridor in Europe in order to prevent the women of the college stepping outside in the rain. The laboratory, which can be found near the sports field, now houses a space in which students put on everything from theatre productions and music recitals to art exhibitions.

Alongside a formal hall that is held roughly once per week, students at the college now also have a modern buttery in which to eat and relax. This addition to the college was built at the same time as the Grade II* listed 1897 Yates Thompson Library, with its beautiful ornamented ceiling, by the addition of the Horner Markwick building in 2004. The library was originally Newnham students' primary reference source since women were not allowed into the University Library. It remains one of the largest college libraries in Cambridge with a strong collection of some 90,000 volumes, including approximately 6,000 rare books.[4] The collection is kept as relevant, up-to-date and useful as possible by the annual purchase of over 1,000 new titles to support undergraduate study in all subjects.

In 1928, Newnham and Girton Colleges were among the venues for a series of lectures by Virginia Woolf which resulted in her book-length essay A Room of One's Own.

As with most colleges at Cambridge, Newnham has many societies of its own including clubs for rowing, football, netball, tennis, and many other sports as well as several choirs. As Newnham does not have its own chapel, choral scholars at Newnham form part of the Selwyn College's chapel choir. The boathouse is shared with Jesus College Boat Club. Newnham students are also welcome to become involved in the many university-wide societies.

For details of graduates in mathematics up to 1940 see