News Corp UK & Ireland Limited (trading as News UK, formerly News International and NI Group), is a British-based American-owned newspaper publisher, and a wholly owned subsidiary of the American mass media conglomerate News Corp. It is the current publisher of The Times, The Sunday Times and The Sun newspapers and its former publications include the Today, News of the World and The London Paper newspapers. Until June 2002, it was called News International plc.[1] On 31 May 2011 the company name was changed from News International Limited to NI Group Limited,[2] and on 26 June 2013 to News UK.[3]

News UK's main competitor is DMG Media, which is in turn owned by the Daily Mail and General Trust.

Between 1987 and 1995, News International owned, through its subsidiary News (UK) Ltd, Today, the first UK national newspaper to be printed in colour. All of News International's newspapers (with the exception of The London Paper, launched in 2006) were founded by other owners, in some cases hundreds of years ago.

South side of The News Building, London

The company's major titles are published by subsidiary companies, Times Newspapers Ltd and News Group Newspapers.[1] These newspapers were until 2010 written at a large site in Wapping in east London, near Tower Hill, which earned the nickname "Fortress Wapping" after a fierce dispute with the union to which the workforce had previously belonged. The printing of the papers is now undertaken at Broxbourne, Knowsley, and Lanarkshire (the largest and fastest print press in the world).[4]

The News Building, where all of News UK's London operations are based, was opened on 16 September 2014 by the Mayor of London, Boris Johnson.[5]

Times Newspapers Limited publishes the compact daily newspaper The Times and the broadsheet The Sunday Times.

Times Newspapers was formed in 1967 when The Thomson Corporation purchased The Times from the Astor family and merged it with The Sunday Times, which it had owned since 1959. The company was purchased by Murdoch's News International in February 1981. The acquisition followed an intense 21 days of negotiations with the print unions conducted by John Collier and Bill O'Neill.[6] The Times Literary Supplement, Times Educational Supplement and Times Higher Education Supplement were also part of the group; the latter two publications have since been sold.

In 2006 an American edition of The Times was launched in New York, Boston and some other East Coast U.S. cities.

Murdoch states that the law and the independent board prevent him from exercising editorial control.[7] However, an article in The Spectator following the resignation of James Harding stated that the trust has "never played much of a role in the 30 years Murdoch has owned the paper" and suggested that Murdoch had pressurised Harding to resign.[8]

News Group Newspapers Ltd publishes the tabloid newspaper The Sun. The News of the World was another tabloid newspaper owned by the company; however its closure was announced on 7 July 2011, following new evidence about a phone hacking scandal at the newspaper. The final issue was released on 10 July 2011.

The News of the World was purchased by Murdoch in January 1969. The Sun was acquired in October 1969 from International Publishing Corporation.

Murdoch states that he acts as a "traditional proprietor"; exercising editorial control on major issues such as which political party to back in a general election or policy on Europe.[7]

The London Paper was the first newspaper to be launched by News International rather than bought. It was an evening freesheet distributed at bus and rail stations in London. It was published five days a week from September 2006 to September 2009, when it closed faced with competition from other free papers.[9] 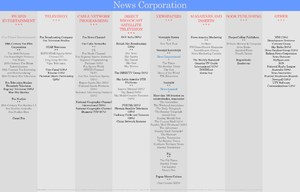 In July 2009 The Guardian, a newspaper owned by Guardian Media Group reported that News Group Newspapers paid in excess of £1m to settle legal cases that threatened to reveal News Group journalists' use on repeated occasions of illegal methods in the pursuit of stories.[10] It has been alleged that News Group staff, including Clive Goodman, illegally accessed voicemail for the mobile phones of thousands of public figures, including politicians and celebrities.[10] Goodman was jailed in 2007 for tapping the mobile phones of three members of the royal staff; this is an offence under the Regulation of Investigatory Powers Act. It was stated by News International at the time that Goodman had acted without their knowledge, and that no other journalists made use of such methods.

The evidence uncovered by The Guardian apparently shows that many more figures were in fact the subject of phone-taps, including Nigella Lawson, Lenny Henry, Gwyneth Paltrow, John Prescott, Boris Johnson and Tessa Jowell. In 2008, the News of the World paid in excess of £400,000 in damages to Gordon Taylor, the chief executive of the Professional Footballers' Association, who was suing the newspaper for its involvement in the illegal interception of messages to his mobile phone. According to The Guardian, this payment, made in exchange for Taylor's silence 'prevented the public from knowing anything about the hundreds of pages of evidence which had been disclosed in Taylor's case.'[11]

In contrast to News International's earlier denials of knowledge, The Guardian cites suppressed evidence revealing that News of the World's editorial staff were involved with private investigators who engaged in illegal phone-hacking, and that both reporters and executives were commissioning purchases of confidential information; this is illegal unless it is shown to be in the public interest. Apparently, these activities were well-known within the News of the World, being "openly paid for by the accounts department with invoices which itemised illegal acts".[11] The paperwork is alleged to show that the above occurred during the tenure of Andy Coulson, who was chief press advisor to David Cameron, leader of the UK's Conservative Party,[11] until his resignation on 21 January 2011.[12]

On 4 July, The Guardian reported that a private investigator at the News of the World had hacked into the phone of the murdered teenager Amanda Dowler, causing both her parents and police investigating her murder to wrongly believe she was still alive. This occurred during the period that Rebekah Brooks (née Wade) was editor.

On 7 July, British newspaper The Daily Telegraph alleged that the families of dead British service personnel were targeted by private investigators working for the News of the World. This led to The Royal British Legion severing ties with the paper until such allegations are proved false. On 7 July, James Murdoch announced the final edition of the News of the World would be published on Sunday 10 July 2011, due to the allegations.[13]

On 15 July Rebekah Brooks resigned as Chief Executive of News International. Her comments on her leaving were:[14]

As chief executive of the company, I feel a deep sense of responsibility for the people we have hurt and I want to reiterate how sorry I am for what we now know to have taken place. I have believed that the right and responsible action has been to lead us through the heat of the crisis. However my desire to remain on the bridge has made me a focal point of the debate. This is now detracting attention from all our honest endeavours to fix the problems of the past. Therefore I have given Rupert and James Murdoch my resignation. While it has been a subject of discussion, this time my resignation has been accepted. Rupert's wisdom, kindness and incisive advice has guided me throughout my career and James is an inspirational leader who has shown me great loyalty and friendship. I would like to thank them both for their support.