From Infogalactic: the planetary knowledge core
Jump to: navigation, search
For other uses, see Newsday (disambiguation). 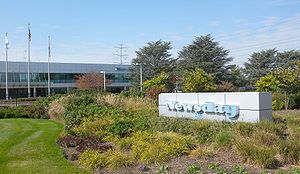 Newsday is an American daily newspaper that primarily serves Nassau and Suffolk counties and the New York City borough of Queens on Long Island, although it is sold throughout the New York metropolitan area. As of 2009,[needs update] its weekday circulation of 377,500 was the 11th-highest in the United States, and the highest among suburban newspapers.[2] In 2012, Newsday expanded to include Rockland and Westchester county news on its website. As of January 2014, Newsday's total average circulation was 437,000 on weekdays, 434,000 on Saturdays and 495,000 on Sundays.[1]

The newspaper's headquarters are in Melville, New York, in Suffolk County.

Founded by Alicia Patterson—the daughter of Joseph Medill Patterson, founder of the New York Daily News—with backing from her husband, Harry Guggenheim, the paper was first published on September 3, 1940 from Hempstead. For many years until a major redesign in the 1970s, Newsday copied the Daily News format of short stories and lots of pictures (Ironically, Patterson was fired as a writer at her father's Daily News in her early 20s, after getting the basic facts of a divorce wrong in a published report). After Patterson's death in 1963, Guggenheim became publisher and editor.

In 1967, Guggenheim turned over the publisher position to Bill Moyers and continued as president and editor-in-chief. But Guggenheim was disappointed by the liberal drift of the newspaper under Moyers, criticizing what he called the "left-wing" coverage of Vietnam War protests.[3][4] The two split over the 1968 presidential election, with Guggenheim signing an editorial supporting Richard Nixon, when Moyers supported Hubert Humphrey.[5]

Guggenheim sold his majority share to the then-conservative Times-Mirror Company over the attempt of newspaper employees to block the sale, even though Moyers offered $10 million more than the Times-Mirror purchase price; Moyers resigned a few days later.[3][6][7] Guggenheim, who died a year later, disinherited Moyers from his will.[8]

After the competing Long Island Press (not to be confused with the alternative weekly of the same name) ceased publication in 1977, Newsday launched a separate Queens edition, followed by a New York City edition dubbed New York Newsday. In June 2000, Times Mirror merged with the Tribune Company, partnering Newsday with the New York City television station WPIX (Channel 11), also owned by Tribune.

With the Times Mirror-Tribune merger, the newspaper founded by Alicia Patterson was now owned by the company that was founded by her great-grandfather, Joseph Medill — which owns the Chicago Tribune and, until 1991, also owned her father's Daily News. (Tribune sold the Daily News to British newspaper magnate Robert Maxwell. After Maxwell's death in 1992, his publishing empire collapsed and Mortimer Zuckerman purchased the Daily News.) Chicago, Illinois, real estate magnate Samuel Zell purchased Tribune in 2007.[2]

Despite having a tabloid format, Newsday is not known for being sensationalistic, as are other local daily tabloids, such as the New York Daily News and the New York Post.[15][16]

In 2004, the alternative weekly newspaper Long Island Press (which is not related to the defunct daily of the same name) wrote that Newsday has used its clout to influence local politics in Nassau and Suffolk Counties.[17]

Newsday created and sponsored a "Long Island at the Crossroads" advisory board in 1978, to recommend regional goals, supervise local government, and liaison with state and Federal officials.[19][20][21] It lasted approximately a decade.

In 2008, Newsday was ranked 10th in terms of newspaper circulation in the United States.[2]

On October 28, 2009, Newsday changed its web site to a paid-subscriber only model. Newsday.com would open its front page, classified ads, movie listings, and school closings to all site visitors, but access beyond this content would require a weekly fee – US$5 as of 2010. This fee would be waived for subscribers of the print edition of the paper, as well as for subscribers to parent-company Cablevision's Internet service.[24] Through its first three months only 35 non-Optimum, non-Newsday subscribers signed up for the paid web site.[25]

Newsday has won 19 Pulitzer Prizes and has been a finalist for 20 additional:[26] If no individual is listed, award is for Newsday staff.