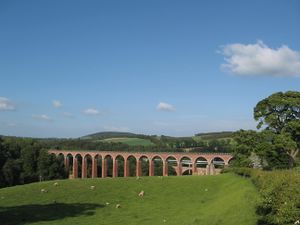 The railway bridge at Leaderfoot

Newstead is a village in the Scottish Borders, just east of Melrose. It has a population of approximately 260, according to the 2001 census.

It is reputedly the oldest continually inhabited settlement in Scotland. As there were undoubtedly buildings, inhabited by the locals who provided for the needs of the soldiers when the Romans were there, and that the people who remained when the Romans went back south continued to live there, and that a population is recorded there from 650AD onwards, until the present day, then this statement is probably true. The stonemasons and architects and other tradesmen who built Melrose Abbey were lodged there. In 1905 it was the site of a discovery of a very rare Roman helmet.[1]

It is situated in the valley of the River Tweed, at a crossing point for the Roman Dere Street. Newstead was of great strategic importance throughout history. This was principally due to the proximity of the prominent Eildon Hill. Former inhabitants include: the ancient Selgovae; the Roman army at Trimontium (Newstead); monks and masons, builders of nearby Melrose Abbey and, more recently, navvies working on the impressive railway viaduct at Leaderfoot. 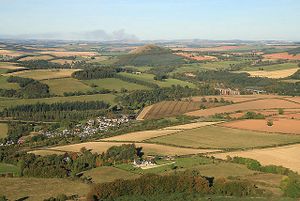 Looking northeast from Eildon Hill North, Newstead below on the left

On the main street of Newstead lies the village hall which was the School until 1941 when it was closed. This is used as the main place for residents to hold meetings or other community functions in the village as it is the only non residential building in the village available for public use.

St John's Wynd, a lane leading to the site of the first Masonic Lodge in Scotland. Set up by the masons, mainly to control the level of training and craftsmanship of the apprentices, before becoming journeymen, the Lodge was certainly there prior to 1600. The building fell into disrepair after the Lodge moved its premises into Melrose in 1742. Only a marker stone and plaque now remain.

The old railway bridge at Leaderfoot is only a ten-minute walk from Newstead village. In 1865 the magnificent Leaderfoot Viaduct of nineteen arches was constructed for the St Boswells Junction to Reston section of the Berwickshire Railway, a line which closed in 1948. It is no longer considered safe to walk over the bridge, so only viewing the bridge is possible.

One of the best known inhabitants is the journalist and author Liz Taylor who writes under the name Elisabeth McNeill. Her most famous novel is probably "A Bridge in Time".

Another person of note is Admiral Sir Henry Fairfax of Ravenswood. Born in Edinburgh of the well-known Fairfax family, his life was spent in the navy. As owner of much of the land around Newstead, on his death in 1900, his widow Dame Harriet gave land and set up a trust to provide a Library, a Mission Hall, and a Reading Room for the benefit of the residents of the village of Newstead, as a memorial to her husband. Unfortunately, nothing now remains of any of these buildings. The marble bust which was in the grounds is now in the Village Hall.