From Infogalactic: the planetary knowledge core
Jump to: navigation, search
For other uses, see Ney (disambiguation). 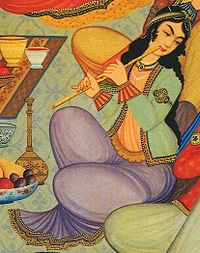 Woman playing the Ney in a painting from the Hasht Behesht Palace in Isfahan, Iran, 1669.

The ney (Persian: نی / نای‎‎), is an end-blown flute that figures prominently in Middle Eastern music. In some of these musical traditions, it is the only wind instrument used. The ney has been played continuously for 4,500–5,000 years, making it one of the oldest musical instruments still in use.

"The Persian ney consists of a hollow cylinder with finger-holes. Sometimes a brass or plastic mouthpiece is placed at the top to protect the wood from damage, but this plays no role in the sound production."[1] The ney consists of a piece of hollow cane or reed with five or six finger holes and one thumb hole. Modern neys may be made instead of metal or plastic tubing. The pitch of the ney varies depending on the region and the finger arrangement. A highly skilled ney player, called neyzen, can reach more than three octaves, though it is more common to have several "helper" neys to cover different pitch ranges or to facilitate playing technically difficult passages in other dastgahs or maqams.

In Romanian, the word nai[2] is also applied to a curved Pan flute while an end-blown flute resembling the Arab ney is referred to as caval.[3]

The typical Persian ney has 6 holes, one of which is on the back. Arab and turkish neys normally have 7 holes, 6 in front and one thumb-hole in the back.

The interval between the holes is a semitone, although microtones (and broader pitch inflections) are achieved via partial hole-covering, changes of embouchure, or positioning and blowing angle. Microtonal inflection is common and crucial to various traditions of taqsim (improvisation in the same scale before a piece is played).

Neys are constructed in various keys. In the Arab system, there are 7 common ranges: the longest and lowest-pitched is the Rast which is roughly equivalent to C in the Western equal temperament system, followed by the Dukah in D, the Busalik in E, the Jaharka in F, the Nawa in G, the Hussayni in A, and the Ajam in B (or B♭). Advanced players will typically own a set of several neys in various keys, although it is possible (albeit difficult) to play fully chromatically on any instrument. A slight exception to this rule is found in the extreme lowest range of the instrument, where the fingering becomes quite complex and the transition from the first octave (fundamental pitches) to the second is rather awkward.

In the Arab world the ney is traditionally used in pastoral areas, showing a preference for smaller, higher-pitched neys. In general, lower-pitched instruments are used in scholastic and religious environments, including the Sufi tradition.

Gargy-tuyduk (Karghy tuiduk) this is a long reed flute whose origin, according to legend, is connected with Alexander of Macedonia, and a similar instrument existed in ancient Egypt. Kargı in Turkish means reed (Arundo donax, also known as Giant Cane). The sound of the gargy-tuyduk has much in common with the two-voiced kargyra. During the playing of the gargy-tuyduk the melody is clearly heard, while the lower droning sound is barely audible. The allay epic songs have been described by the Turkologist N. Baskakov who divides them into three main types:

The Pamiri nay is a transverse flute made of wood or, in Eastern Badakhshan, eagle bone. Although the name is similar to the Arabic end-blown nay, it might well be that this side-blown flute is more related to Chinese flutes such as the dizi, perhaps through a Mongol link.[5] It is used for solo melodies as well as with orchestras and for vocal accompaniment. One of the main uses of the nay is for the most original form of the traditional performance ‘falaki’. These are brief melodic sessions which can express complaints against destiny, the injustice of heaven or exile to distant places, and sentiments such as the sorrow of a mother separated from her daughter, the sorrow of a lover torn from her/his beloved, etc.[6]