The Nguyễn dynasty (Vietnamese: Nhà Nguyễn; Hán-Nôm: 阮朝, Nguyễn triều) was the last ruling family of Vietnam.[1] Their rule lasted a total of 143 years. It began in 1802 when Emperor Gia Long ascended the throne after defeating the Tây Sơn dynasty and ended in 1945 when Bảo Đại abdicated the throne and transferred power to the Democratic Republic of Vietnam. During the reign of Emperor Gia Long, the nation officially became known as Việt Nam (越南), but from the reign of emperor Minh Mạng on, the nation was renamed Đại Nam (大南, literally "Great South"). Their rule was marked by the increasing influence of French colonialism; the nation was eventually partitioned into three, Cochinchina became a French colony while Annam and Tonkin became protectorates which were independent in name only. 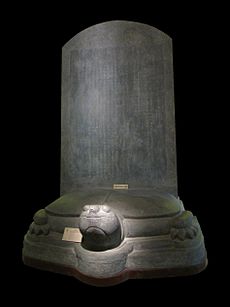 The Nguyễn family had been one of the major families in Vietnamese history, dating back to the days of the Hero–Emperor Lê Lợi. Due to a civil war and the weakness of the Later Lê dynasty, the Nguyễn and the Trịnh (another of the major families) joined together in opposition to the Mạc. Nguyễn Kim, the leader of this alliance, was assassinated in 1545 by a servant of the Mạc. Kim's son-in-law Trịnh Kiểm, took over the alliance because Kim's sons were too young. In 1558, Nguyễn Hoàng, the eldest son of Nguyễn Kim was given lordship over the southern, newly conquered provinces of Vietnam. He ruled from the city of Huế for the rest of his life and established the dominion of the Nguyễn lords in the southern part of the country. While the Nguyễn lords, like the Trịnh, paid tribute to the Lê Emperor, the reality was they ruled, not the king. Nguyễn Hòang and his successors continually expanded their territory by making Kampuchea a protectorate, and by invading Laos, Champa and many small countries in the area. The Nguyễn lords styled themselves as "lord" (Chúa in Vietnamese).

Birth of the dynasty

It was Nguyễn Phúc Nguyên (or Lord Sãi), Nguyễn Hoàng's son, who started the Nguyễn Phúc family name. 200 years later, Nguyễn Phúc Khoát was the first ruler of the line who styled himself King (Vương in Vietnamese), as the Trịnh lords began to do so in the North.

Nguyễn Phúc Ánh finally united Vietnam for the second time in 300 years. He started a dynasty and styled himself Emperor (Viet: Hoàng Đế) Gia Long. After Gia Long, other rulers of the dynasty would soon run into problems with Catholic missionaries and, subsequently, the involvement of Europeans in Indochina. His son Minh Mạng was then faced with the Lê Văn Khôi revolt, when native Christians and their European clergy tried to overthrow him and install a grandson of Gia Long who had converted to Roman Catholicism. This was only the start, as frequent revolts were launched by the missionaries in an attempt to Catholicize the throne and the country. Conversely[2] Minh Mạng is also noted for the creation of public lands as part of his reforms.[3]

Emperors Minh Mạng, Thiệu Trị and Tự Đức, were opposed to French involvement in the country and tried to reduce the growing Catholic community in Vietnam at that time. The imprisonment of missionaries who had illegally entered the country was the primary pretext for the French to invade and occupy Indochina. Much like what had occurred in Qing China, there were also numerous incidents involving other (European) nations during the 19th century.

The last Nguyễn Emperor to rule with complete independence was Tự Đức. After his death, there was a succession crisis as the regent Tôn Thất Thuyết orchestrated the murders of three emperors in a year. This allowed the French to take direct control of the country and eventually gain complete control of the monarchy. All emperors since Đồng Khánh were chosen by the French and had only a symbolic position.

Napoleon III took the first steps to establishing a French colonial influence in Indochina. He approved the launching of a naval expedition in 1858 to punish the Vietnamese for their mistreatment of European Catholic missionaries and force the court to accept a French presence in the country. An important factor in his decision was the belief that France risked becoming a second-rate power by not expanding its influence in East Asia. Also, the idea that France had a civilizing mission was spreading. This eventually led to a full-out invasion in 1861.

By 1862 the war was over and Vietnam conceded three provinces in the south, called by the French Cochinchina, opened three ports to French trade, allowed free passage of French warships to Kampuchea (which led to a French protectorate over Kampuchea in 1863), allowed freedom of action for French missionaries and gave France a large indemnity for the cost of the war. France did not however intervene in the Christian-supported Vietnamese rebellion in Bắc Bộ, despite the urging of missionaries, or in the subsequent slaughter of thousands of Christians after the rebellion, suggesting that although persecution of Christians was the prompt for the intervention, military and political reasons ultimately drove colonialism in Vietnam.

France completely conquered the Vietnamese in 1887 and promoted the further occupation and development of the Mekong Delta region by the Vietnamese. The Nguyễn Dynasty still ruled nominally the French protectorate of Annam. France added new ingredients to the cultural stew of Vietnam. The French added Catholicism and a writing system based upon Latin letters. The spelling used in this transliteration of Vietnamese surprisingly was Portuguese because the French relied upon a dictionary compiled earlier by a Portuguese cleric.

While seeking to maximize the use of Indochina's natural resources and manpower to fight World War I, France cracked down on all patriotic mass movements in Vietnam. Indochina, mainly Vietnam, had to provide France with 70,000 soldiers and 70,000 workers, who were forcibly drafted from the villages to serve on the French battlefront. Vietnam also contributed 184 million piasters in the form of loans and 336,000 tons of food.

These burdens proved all the heavier as agriculture was hard hit by natural disasters from 1914 to 1917.

Lacking a unified nationwide organization, the Vietnamese national movement, though still vigorous, failed to take advantage of the difficulties France was experiencing as a result of war to stage any significant uprisings. In May 1916, the sixteen-year-old king, Duy Tân, escaped from his palace in order to take part in an uprising of Vietnamese troops. The French were informed of the plan and the leaders arrested and executed. Duy Tân was deposed and exiled to Réunion Island in the Indian Ocean.

Nationalist sentiments intensified in Vietnam, especially during and after the First World War, but all the uprisings and tentative efforts failed to obtain any concessions from the French overseers. The Russian Revolution which occurred at this time had a tremendous impact on shaping 20th century Vietnamese history.

The sequels to the Second World War: for Vietnam, the explosion of World War II on 1 September 1939 was an event as decisive as the French taking of Đà Nẵng in 1858. The Axis power of Japan invaded Vietnam on 22 September 1940, attempting to construct military bases to strike against the Allies in Southeast Asia.

Emperor's flag of the Empire of Vietnam, from April to August 1945

In 1941–1945, a communist resistance movement called the Viet Minh developed under the leadership of Ho Chi Minh. From 1944 to 1945 there was a famine in northern Vietnam in which over one million people starved to death. In March 1945, realizing the allied victory was inevitable, the Japanese overthrew the French authorities in Vietnam, imprisoned their civil servants and proclaimed Vietnam "independent" under Japanese "protection" with Bảo Đại as emperor.

Collapse of the dynasty

Japan surrendered on 15 August, triggering a revolt by the Vietminh. After receiving a "request" for his resignation, Bảo Đại abdicated on 30 August and handed power over to the Vietminh. Bảo Đại was named "supreme counselor" to the new government. Bảo Đại left shortly afterward since he did not agree with the policies of the Vietminh and went into exile in Hong Kong. Following the return of the French in October, the French-Indochina War (1946–54) was fought between France and the Vietminh.

Succession and heads of dynasty

In 1948, the French persuaded Bảo Đại to return as "Chief of State" (Quốc Trưởng) of the "State of Vietnam" (Quốc Gia Việt Nam) set up by France in areas over which it had regained control, while a bloody war with the Viet Minh under Ho Chi Minh continued. Bảo Đại spent much of his time during that conflict enjoying a good life either at his luxurious home in Đà Lạt (in the Vietnamese Highlands) or in Paris, France. This came to end with the French defeat at Điện Biên Phủ in 1954.

The French negotiated with the U.S. to divide Vietnam. It was divided into North Vietnam going to the Viet Minh and South Vietnam going to a new government. Bảo Đại's prime minister, Ngô Đình Diệm, overthrew him in a 1955 referendum that, by most accounts, was flagrantly rigged. Not only did an implausible 98 percent of voters support Diem's proposal for a republic, but the number of votes for a republic far exceeded the number of registered voters. Diem then assumed the position of President of the Republic of Vietnam (Việt Nam Cộng Hòa), once more ending Bảo Đại's involvement in Vietnamese affairs – this time permanently.

Bảo Đại went into exile in France, where he died in 1997 and was buried in Cimetière de Passy. Crown Prince Bảo Long succeeded on the death of his father Emperor Bảo Đại as Head of the Imperial House of Vietnam, 31 July 1997. He was in turn succeeded by his brother Bảo Thắng on 28 July 2007. 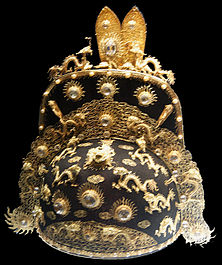 The following list is the emperors' era names, which have meaning in Chinese and Vietnamese. For example, the first ruler's era name, Gia Long, is the combination of the old names for Saigon (Gia Định) and Hanoi (Thăng Long) to show the new unity of the country; the fourth, Tự Đức, means "Inheritance of Virtues"; the ninth, Đồng Khánh, means "Collective Celebration".