La Niña (Spanish for The Girl) was one of the three Spanish ships used by Italian explorer Christopher Columbus in his first voyage to the West Indies in 1492. As was tradition for Spanish ships of the day, she bore a female saint's name, Santa Clara. However, she was commonly referred to by her nickname, La Niña, which was probably a pun on the name of her owner, Juan Niño of Moguer.[1] She was a standard caravel-type vessel.

The other ships of the Columbus expedition were the caravel-type Pinta and the carrack-type Santa María. The Niña was by far Columbus's favorite. She was originally lateen sail rigged caravela latina, but she was re-rigged as caravela redonda at Las Palmas, in the Canary Islands, with square sails for better ocean performance.[2] There is no authentic documentation on the specifics of the Niña's design, although Michele de Cuneo, who accompanied Columbus on his second voyage, mentioned that the Nina was "about 60 toneladas" (60 tons), which may indicate a medium sized caravel of around 50 feet (15 m) in length on deck.[3] Often said to have had three masts, there is some evidence she may have had four masts.[4]

On Columbus' first expedition, the Niña carried 24 men, captained by Vicente Yáñez Pinzón. They left Palos de la Frontera on August 3, 1492, stopping at the Canary Islands on August 12, 1492, and continued westward. Landfall was made in the Bahamas at dawn on October 12, 1492.

On February 14, 1493, in the east of the Azores, a storm threatened to capsize the Niña, and at Columbus' instigation, he and the crew took a series of vows to perform certain acts including religious pilgrimages upon their return to Spain.[5] The Niña reached Lisbon, Portugal, on March 4, 1493, and arrived in Palos de la Frontera on March 15, 1493.[6] On the first voyage to America, the crew of the Niña slept on the deck but adopted the use of hammocks after seeing Native Americans utilizing them.[4]

In September 1493, the Niña joined a grand fleet of 17 ships for the second voyage to Hispaniola, becoming the flagship for an exploration of Cuba. She was the only ship to survive the 1495 hurricane, returning quickly to Spain in 1496.

The Niña was then chartered for an unauthorized voyage to Rome. She was captured by a pirate corsair when leaving the port of Cagliari and brought to Cape Pula, Sardinia. The Captain, Alonso Medel, escaped with a few men. He stole a boat, rowed back to the Niña, and made sail, returning to Cadiz.

In 1498, she returned to Hispaniola as advance guard of Columbus' Third Voyage. She was lying in wait at Santo Domingo in 1500. In 1501, she made a trading voyage to the Pearl Coast on the island of Cubagua, Venezuela, and no further log of her is found in historic archives.[7] 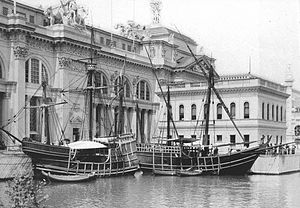 Nina and Pinta replicas at the 1893 Columbian Exposition 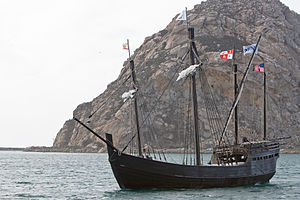 The replica of the Columbus Foundation

A replica of Niña was built by the Spanish government for the Columbian Naval Review of 1893. Along with replicas of Santa Maria and Pinta she participated in the review.[8]

A replica of the Niña (based upon theory; there are no known contemporary likenesses of any of the three ships) now sails around the world.

The 4-masted replica Niña was built 1988-1991 by engineer and naval researcher John Patrick Sarsfield, British naval historian Jonathan Morton Nance, and a group of master shipbuilders in Bahia, Brazil who were still using design and construction techniques dating back to the 15th century. They built it from heavy, teredo-resistant Brazilian hardwoods using only adzes, axes, hand saws, and chisels. The sails were designed by Nance using square main sails and two aft lateen sails as were used by ships of this size at the end of the 15th century. The crew of the Niña say that it can make about 5–7 knots, which is quicker than older designs of the era. The replica weighs 75 tons.

In 1991, the replica sailed to Costa Rica to take part in the filming of 1492: Conquest of Paradise,[9] and the Niña has visited hundreds of North America ports to give the public a chance to see and tour the ship. It continues to visit ports across the Eastern to Mid United States along with its sister replica ship, the Pinta. The replicas of the Niña and the Pinta were built in Valença, Brazil using the same methods as the 15th century Portuguese.[10]

Other replicas are located in Corpus Christi, Texas, United States and in Andalusia, Spain (at El Puerto de Santa María and at the Wharf of the Caravels in Palos de la Frontera).

The historic San Francisco restaurant Bernstein's Fish Grotto was designed to look like the Niña.[11]