Niagara County is a county located in the U.S. state of New York. As of the 2010 census, the population was 216,469.[1] The county seat is Lockport.[2] The county name is from the Iroquois word Onguiaahra; meaning the strait or thunder of waters.[3]\

Niagara County is part of the Buffalo-Niagara Falls metropolitan area, and its Canadian border is the province of Ontario.

It is the location of Niagara Falls and Fort Niagara, and has many parks and lake shore recreation communities. In the Summer of 2008 Niagara County celebrated its 200th Birthday with the first town of the county, Town of Cambria.

When counties were established in the New York colony in 1683, the present Niagara County was part of Albany County. This was an enormous county, including the northern part of New York State as well as all of the present State of Vermont and, in theory, extending westward to the Pacific Ocean. This county was reduced in size on July 3, 1766 by the creation of Cumberland County, and further on March 16, 1770 by the creation of Gloucester County, both containing territory now in Vermont.

On March 12, 1772, what was left of Albany County was split into three parts, one remaining under the name Albany County. One of the other pieces, Tryon County, contained the western portion (and thus, since no western boundary was specified, theoretically still extended west to the Pacific). The eastern boundary of Tryon County was approximately five miles west of the present city of Schenectady, and the county included the western part of the Adirondack Mountains and the area west of the West Branch of the Delaware River. The area then designated as Tryon County now includes 37 counties of New York State. The county was named for William Tryon, colonial governor of New York.

In the years prior to 1776, most of the Loyalists in Tryon County fled to Canada. In 1784, following the peace treaty that ended the American Revolutionary War, the name of Tryon County was changed to honor the general, Richard Montgomery, who had captured several places in Canada and died attempting to capture the city of Quebec, replacing the name of the hated British governor.

Niagara County was created from Genesee County in 1808. It was, however, larger than the present Niagara County even though it consisted of only the Town of Cambria.

From 1814 to 1817, records of Cattaraugus County were divided between Belmont (the seat of Allegany County) and Buffalo (then in Niagara County).

In 1821, Erie County was created from Niagara County.

The county has a number of properties on the National Register of Historic Places.[4]

Niagara County is in the extreme western part of New York State, just north of Buffalo and adjacent to Lake Ontario on its northern border and the Niagara River and Canada on its western border.

The primary geographic feature of the county is Niagara Falls, the riverbed of which has eroded seven miles south over the past 12,000 years since the last Ice Age. The Niagara River and Niagara Falls, are in effect, the drainage ditch for four of the Great Lakes which constitute the largest supply of fresh water in the world. The water flows north from Lake Erie, then through the Niagara River, goes over Niagara Falls, and then on to Lake Ontario and the St. Lawrence River, eventually emptying into the North Atlantic Ocean. Today, tourists and visitors to the Falls see a diminished flow of water over the Falls, since a portion of the flow has been diverted for hydroelectric power purposes. Both the American and Canadian side of the Niagara River have massive electrical power plants.

The spectacular Niagara Gorge is the path Niagara Falls has taken over thousands of years as it continues to erode. Niagara Falls started at the Niagara Escarpment which cuts Niagara County in half in an East-West direction. North of the Escarpment lies the Lake Ontario plain, which is a fertile flatland that is used to grow grapes, apples, peaches and other fruits and vegetables. The grape variety Niagara, source of most American white grape juice but not esteemed for wine, was first grown in the county, in 1868. Viticulture, or wine culture has begun to take place, with several wineries below the escarpment. This has helped to improve the depressed economy of the region. To further capitalize on economic development, the state has created the Niagara Wine Trail.

Niagara County is governed by a 15-member Legislature, with the Chairman of the Legislature as the de facto head of county government. Currently, there are 11 members of the Republican-led Majority Caucus and four members of the Democrat-led Minority Caucus. The Legislature formerly consisted of 19 members, but was downsized to 15 seats effective January 1, 2012 based on the results of a public referendum.

Legislator Michael A. Hill (15th District—Towns of Royalton and Hartland)

Additionally, the ad hoc Refuse Disposal District Committee has oversight of that District.

In addition to the areas mentioned above, much of Niagara County is serviced by a Water District and a Sewer District. Both bodies are subordinate to the County Legislature; the former has a direct relationship, while the latter is currently under limited oversight of the town supervisors within the district.

Niagara County is part of:

Niagara University is located in Lewiston, New York. Niagara County Community College is located in Sanborn, New York. Many Niagara County residents also attend Erie and other Western New York County Schools. In the Buffalo Metro area there more than 20 public and private colleges and universities in Buffalo and its environs offer programs in technical and vocational training, graduate, and professional studies. 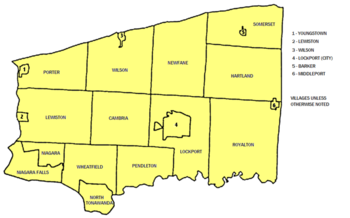