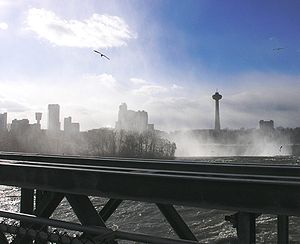 Skyline of Niagara Falls, Canada, as seen from Niagara Falls State Park across the river in the United States

The city is dominated by the Niagara Falls, a world-famous set of three large waterfalls on the Niagara River. Both the American and Horseshoe falls can be best seen from the Canadian side of the river, so the city has one of the major tourist attractions of the world. The natural spectacle attracts millions of tourists yearly.

This area, which stretches along the Niagara Parkway and tourist promenade, is particularly concentrated at the brink of the falls. Apart from the natural attractions along the river, it includes observation towers, high-rise hotels, souvenir shops, casinos and theatres, mostly with colourful neon billboards and advertisements, and sufficient parking to accommodate visitors. Further to the north or south, golf courses are operated alongside historic sites from the War of 1812.

This area was long part of the Iroquois Confederacy territory: five powerful First Nations mostly along the southern edge of the Great Lakes. The Mohawk, Oneida, Onondaga, Cayuga and Seneca were based largely in present-day New York, ranging from east near the Hudson River, to western areas of Seneca Lake and along Ontario and other Great Lakes.

The Niagara Falls area has had some European settlement since the 17th century. Louis Hennepin, a French priest and missionary, is regarded as the first European to visit the area in the 1670s. French colonists settled mostly in Lower Canada, beginning near the Atlantic, and in Quebec and Montreal. Increased settlement in this area took place during and after the American Revolutionary War, when the British Crown made land grants to Loyalists to help them resettle in Upper Canada and provide some compensation for their losses after the United States became independent. Loyalist Robert Land received 200 acres (81 ha) and was one of the first people of European descent to settle in the Niagara Region. He moved to nearby Hamilton three years later due to the relentless noise of falls.[3]

Tourism started in the early 19th century and has been a vital part of the local economy since that time. The falls became known as a natural wonder, in part to their being featured in paintings by prominent American artists of the 19th century such as Albert Bierstadt. Such works were reproduced as lithographs, becoming widely distributed. In addition, Niagara Falls markets itself as a honeymoon destination; it is the self-proclaimed "honeymoon capital of the world."

In 1882, Irish author Oscar Wilde visited Niagara Falls after lecturing in Buffalo, New York, during a lecture tour of North America. He stayed at the Prospect House.

An Internment camp was set up at The Armoury in Niagara Falls from December 1914 to August 1918. [4]

In 1953, the American actress Marilyn Monroe filmed Niagara here. This was a major event for the city.

In 1962, the city amalgamated with the surrounding Stamford Township, resulting in a doubling of population.

With the creation of a Niagara regional government in 1970, the city absorbed the village of Chippawa, Willoughby Township and part of Crowland Township, creating the present-day municipal boundaries.

The city's official historian is Sherman Zavitz, who gives regular radio broadcasts on many aspects of Niagara's history.[5] 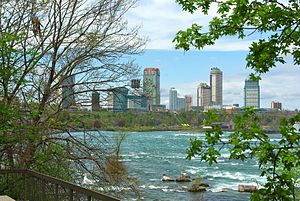 Looking north on the Niagara River towards Niagara Falls, Ontario

Niagara Falls is approximately 130 km (81 mi) by road from Ontario's capital of Toronto, which is located across Lake Ontario to the north. The area of the Niagara Region is approximately 1,800 km2 (690 sq mi).

The city is built along the Niagara Falls waterfalls and the Niagara Gorge on the Niagara River, which flows from Lake Erie to Lake Ontario.

In 2011, the population of Niagara Falls was 81,300 persons, while the metropolitan area enumerated 422,805 people. The population of Niagara Falls is older than Canada in general in terms of age structure. Youths under 18 years of age number 19.3%. Some 7,715 (9.5%) inhabitants described themselves as visible minorities (non-white/non-European), with the majority of those being Black, Chinese, Filipino and South Asian people.[10][11]

83.97% of Niagara Falls city residents self-identified with Christian denominations. The largest denominations consist of Catholic (41.99%), Protestant (36.80%), and 5.18% other Christian mostly Eastern Orthodox, 14.10% claimed no religious affiliation, while other religions (1.93%) including Jewish, Buddhist, Hindu, and Muslim accounted for the rest.[12] 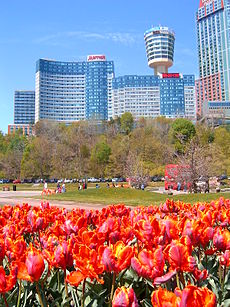 With a plentiful and inexpensive source of hydroelectric power via the waterfalls, many electro-chemical and electro-metallurgical industries located there in the early to mid-20th century.

Industry began moving out of the city in the 1970s and 80s because of economic recession and increasing global competition in the manufacturing sector. Tourism increasingly became the city's most important source of revenue. Generally speaking, Niagara Falls, Ontario is a more popular destination than Niagara Falls, New York, in part due to the better view of the falls from the Canadian side of the river. In the 20th century, there was a favourable exchange rate when comparing Canadian and U.S. currencies, and Ontario had a greater focus on tourism. Also, Ontario's legal drinking age of 19, in comparison to a legal drinking age of 21 in the U.S., attracts 19- and 20-year-old potential alcohol consumers from across the border.

The Ontario government introduced legal gambling to the local economy in the mid-1990s. Casino Niagara precipitated an economic boom in the late 1990s as numerous luxury hotels and tourist attractions were built, and a second casino, Niagara Fallsview, opened in 2004. Both were able to attract American tourists due in part to the comparatively less expensive Canadian dollar, and despite the opening of the Seneca Niagara Casino on the American side. When the Canadian and US currencies had moved closer to parity in the 2000s, Niagara Falls, Ontario continued to be a popular destination for Americans. Its tourist areas had many attractions and a vibrancy, while Niagara Falls, New York languished in a prolonged economic downturn.

In 2004, several tourist establishments in Niagara Falls began adding a three percent marketing fee to bills. The collected money is untraceable, and there are no controls over how each establishment spends it. The Ontario government—concerned that tourists could be misled into believing the fees were endorsed by the government—warned hotels and restaurants in 2008 not to claim the fee if it was not being remitted to a legitimate non-profit agency that promotes tourism. The practise continues, and takes in an estimated $15 million per-year from tourists unaware the fee is voluntary and can be removed from their bill.[13][14]

Recent development has been mostly centred on the Clifton Hill and Fallsview areas. The Niagara Falls downtown (Queen Street) is undergoing a major revitalization; the city is encouraging redevelopment of this area as an arts and culture district. The downtown was a major centre for local commerce and night life up until the 1970s, when the development of the Niagara Square Shopping Centre began to draw away crowds and retailers. Since 2006, Historic Niagara has brought art galleries, boutiques, cafés and bistros to the street. Attractions include renovation of the Seneca Theatre. 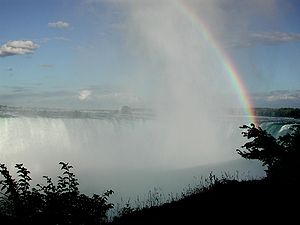 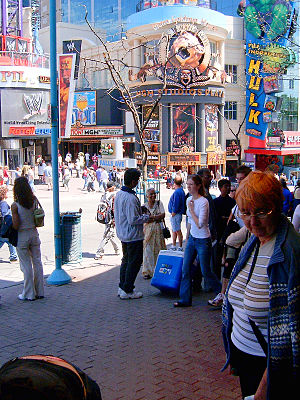 The Niagara Stars of the defunct Canadian Baseball League played in Welland, Ontario and the Niagara IceDogs play in St. Catharines, Ontario.

Niagara Falls City Council consists of eight councillors and a mayor. City elections take place every four years with the last election held on 25 October 2010. Council is responsible for policy and decision making, monitoring the operation and performance of the city, analysing and approving budgets and determining spending priorities. Due to regulations put forward by the Municipal Elections Act 2001, elections are held on the fourth Monday in October except for religious holidays or if a member of council or if the mayor resigns. 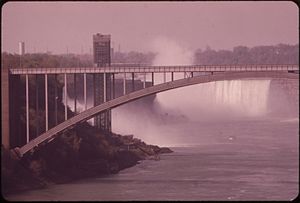 Niagara Falls and Niagara Falls, New York are linked to major highways in Canada and the United States respectively, with the Queen Elizabeth Way acting as a major artery between Toronto and Fort Erie, Ontario. Highway 420 (along with Niagara Regional Road 420) connect the Rainbow Bridge to the QEW. The Whirlpool Bridge is located at the end of Bridge Street. The Niagara Parkway is a road operated under the Niagara Parks Commission which connects Niagara-on-the-Lake to Fort Erie via Niagara Falls.

Niagara Falls formerly had King's Highways passing through the city. These included: 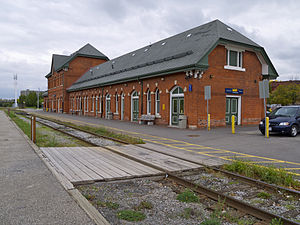 Via station in Niagara Falls, Ontario

Via Rail Canada and Amtrak jointly provide one train per day in each direction. This is "The Maple Leaf" which operates between Toronto Union, Niagara, Buffalo, Albany and New York's Penn station), arriving and departing out of the Niagara Falls station. In the summer it offers a bike train service on a limited schedule. http://www.amtrak.com/ccurl/937/472/Maple-Leaf-Schedule-011215.pdf

At other times, regular hourly GO train services are provided between Toronto Union and Burlington station, where connecting bus services operate to and from the rail station at Niagara. http://www.gotransit.com/timetables/en/schedules/schedules_window.aspx?tableid=12&dir=E&date=2015-10-31&parentid=1

The City of Niagara Falls is working toward Bike Friendly designation and providing more resources to encourage active transportation.

Niagara Falls is also served by a growing library system composed of four branches,[19] with the main branch located in the downtown area.[20] It is visited by over 10,000 people weekly. An extensive online database of photographs and artwork is maintained at Historic Niagara Digital Collections.[21]

Niagara Falls is served by two main local newspapers, three radio stations and a community television channel. All other media is regionally based, as well, from Hamilton and Toronto.

Due to its proximity to Hamilton and Toronto, local residents have access to the papers like The Hamilton Spectator, the Toronto Star, and the Toronto Sun.

The area is otherwise served by stations from Toronto, Hamilton and Buffalo.

Television stations from Toronto and Buffalo are also widely available. Officially, Niagara Falls is part of the Toronto television market, even though it is directly across the Niagara River from its American twin city, which is part of the Buffalo market.