Nice Côte d'Azur Airport (French: Aéroport Nice Côte d'Azur) (IATA: NCE, ICAO: LFMN) is an international airport located 3.2 NM (5.9 km; 3.7 mi) southwest[2] of Nice, in the Alpes-Maritimes départment of France. It is the third busiest airport in France and serves as a focus city for Air France and an operating base for easyJet. In 2013, it handled 11,554,195 passengers. The airport is positioned 7 km (4 mi) west of the city centre, and is the principal port of arrival for passengers to the Côte d'Azur.

Due to its proximity to the Principality of Monaco, it also serves as the city-state's airport, with helicopter service linking the principality and airport.[4] Some airlines market Monaco as a destination via Nice Airport.[5] 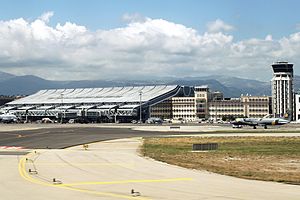 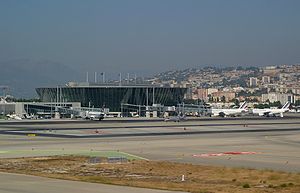 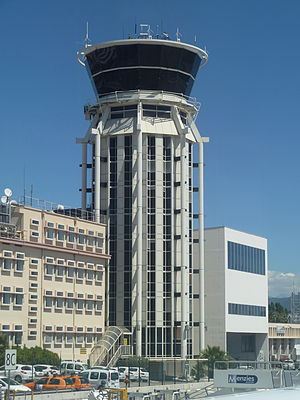 The airport covers an area of over 3.70 km2 (1.43 sq mi), with 2.70 km2 (1.04 sq mi) used by its two parallel runways and the two passenger terminals and freight terminal. The airport's theoretical capacity is 13 million passengers and 52 movements (26 landings) per hour. The two airport terminals are linked by courtesy shuttle buses that also connect the car parks with the terminals.