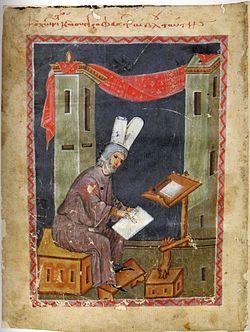 Niketas Choniates, from a medieval manuscript.

Niketas or Nicetas Choniates (Greek: Νικήτας Χωνιάτης, ca. 1155 to 1217), whose real surname was Akominatos (Ἀκομινάτος), was a Greek Byzantine government official and historian – like his brother Michael Akominatos, whom he accompanied to Constantinople from their birthplace Chonae (from which came his nickname, "Choniates" meaning "from Chonae"). Nicetas wrote a history of the Eastern Roman Empire from 1118 to 1207.

Niketas Akominatos was born to wealthy parents around or after 1150 in Phrygia in the city of Chonae (near the modern Honaz in Turkey). Bishop Nicetas of Chonae baptized and named the infant; later he was called "Choniates" after his birthplace. When he was nine, his father dispatched him with his brother Michael to Constantinople to receive an education. Niketas' older brother greatly influenced him during the early stages of his life.

He initially secured a post in the civil service, and held important appointments under the Angelos emperors (among them that of Grand Logothete or Chancellor) and was governor of the theme of Philippopolis at a critical period. After the horrific sack of Constantinople during the Fourth Crusade in 1204 he fled to Nicaea, where he settled at the court of the Nicaean emperor Theodore I Lascaris, and devoted himself to literature. He died c. 1215–16.

His chief work is his History, in twenty-one books, of the period from 1118 to 1207. In spite of its florid style, it is of value as a record (on the whole impartial) of events of which he was either an eyewitness or which he had heard of first hand (though he should be balanced with the other Greek historian for this time, John Kinnamos). Its most interesting portion is the description of the occupation of Constantinople in 1204, which may be read with Geoffroi de Villehardouin's and Paolo Rannusio's works on the same subject.

His little treatise On the Statues destroyed by the Latins is of special interest to the archaeologist and art historian.

His theological work, (Thesaurus Orthodoxae Fidei), although extant in a complete form in manuscripts, has only been published in part. It is one of the chief authorities for the heresies and heretical writers of the 12th century.

Umberto Eco's novel Baudolino [1] is set partly at Constantinople during the Crusader conquest. The imaginary hero, Baudolino, saves Niketas during the sacking of Constantinople, and then proceeds to confide his life story to him.