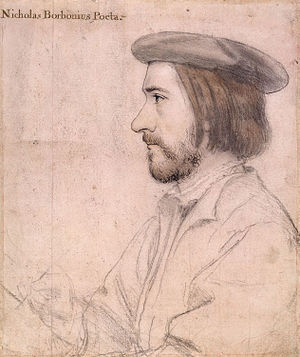 Portrait by Hans Holbein the Younger, 1535

Nicholas Bourbon (1503 or 1505 - after 1550) was a French court preceptor and poet. He wrote a collection of poems called Nugae (Latin for 'trifles'), which are known as the Bagatelles in French. He is the great-uncle of Nicholas Bourbon (1574–1644), a member of the Académie française.

Bourbon was born in Vendeuvre-sur-Barse, France. He went to England in 1535 to pay homage to Henry VIII of England and his second Queen Consort Anne Boleyn in gratitude for help received from them while under persecution in France. He later wrote a series of poems in which Anne Boleyn is described as one of God's beloved servants.

Nugae was the subject of an epigram of John Owen.