Father Nicholas Sheehy (1728–1766) was an 18th-century Irish Roman Catholic priest who was executed on charge of accessory to murder. Father Sheehy was a prominent and vocal opponent of the Penal Laws, which disenfranchised and persecuted Catholics in Ireland. His conviction is widely regarded as an act of judicial murder amongst supporters of Irish rebellion.

His birthplace is the subject of debate but there a belief that Nicholas Sheehy was born in Fethard, Ireland, near Clonmel and grew up in a house near Newcastle on the Tipperary and Waterford border. His father was Francis, son of John of Drumcollogher.

Nicholas Sheehy had a sister, Catherine (married as Catherine Burke), who later erected his gravestone. He also had a sister, Mrs Green.[1] Nicholas had a cousin (Edmund Buck), who was hanged in 1776 at Clogheen on the same charges.

Nicholas Sheehy was possibly educated in France. His training for the priesthood was at the Irish College in Salamanca.[2] and, following a time as curate at Newcastle, County Tipperary, became the parish priest for Shanrahan, Ballysheehan, and Templetenny, County Tipperary.

During this time, famine caused much suffering and death in Ireland. It is estimated that over 400,000 perished from malnutrition.[3] Adding to the social unrest was a rumour that the Catholic French would invade Ireland.[4] Part of this concern stemmed from the emigration of Irish soldiers who had left for France after the Treaty of Limerick known as the Flight of the Wild Geese. The concern was that these Irish would lobby the French monarch to support the Catholics in Ireland. This led to new persecutions of Catholic Irish and their priests.

Sheehy spoke out against the Penal Laws, the eviction of poor tenants by Anglo-Irish landlords, the elimination of common land by enclosure, and compulsory tithes. These tithes were due to the Protestant Church of Ireland and its clergy. To anyone who would not or could not pay, the tithes were often seized by force and given to the local Protestant minister. Father Sheehy believed that this practice was unjust since they were levied on impoverished Catholics to benefit the wealthiest. 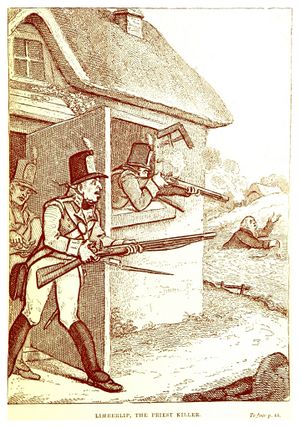 First trial (conspiracy against the State)

Sheehy's beliefs led him into conflict with local Protestant leaders around Clonmel. In time, he was accused of conspiracy against the State (for involvement in a Whiteboys riot that destroyed a wall that prevented access to common land near Clogheen). After a trial in Dublin the accused was acquitted.[4]

Following his acquittal, Sheehy was accused of involvement in the disappearance or murder of an informer. A reward of £50 was offered by the government for allegations that led to conviction in this case. Father Sheehy went into hiding at this time.

In 1764, the government issued a Proclamation and offered £300 reward for the capture of Sheehy. When he read the Proclamation, Sheehy wrote from one of his hiding places to Thomas Waite (Under-Secretary for Ireland) and offered to surrender only if he would be tried in Dublin. The offer was accepted and the trial took place on 10 February 1766, when he was acquitted of High Treason.

Immediately after his acquittal, Sheehy was charged with murder.

On 12 March 1766, Sheehy was tried at Clonmel for being an accessory in the murder of John Bridge. The judge Richard Clayton (Irish judge) had the reputation of an honest and humane man, but he had arrived in Ireland only the previous year and seems to have been quite unaware of the political background to the trial.

Many of the witnesses who had previously testified against Sheehy also testified in this trial, in addition to Mrs. Mary Brady (Moll Dunlea), an "abandoned character".[5] The evidence was widely considered as fabricated by local Anglo-Irish landowners and the Anglican Vicar of Clogheen in south County Tipperary.

Evidence was presented in favour of Sheehy, that he was "a respectable man and a man of property" by a Mr Keating, who said that Father Sheehy was in his house at the time of the murder. Mr Keating's testimony was dismissed in court by a Protestant clergyman (Mr Hewitson), who declared Keating was unreliable. Mr Keating was then arrested and sent to Kilkenny Gaol based on Mr Hewitson's allegations to frustrate his giving evidence. Although the judge was later much criticised for his conduct of the trial, it has been argued that his summing up was actually favourable to the accused.

Sheehy was convicted and sentenced to be hanged, drawn and quartered. He asserted his innocence before his death of all the charges made against him. He said in his final speech, after sentenced to death, that he was being put to death for a crime which had never been committed; the murder victim (John Bridge) was alleged to be in Cork after the date of the "crime" and it is thought that he emigrated to Newfoundland.

Sheehy's attorney, on hearing the sentence of death, said to the judge, magistrates and jurors, "If there is any justice in heaven, you will die roaring.".[3]

Others accused were also convicted for the murder of John Bridge and executed (3 May 1766), including Edmond Sheehy, cousin to the priest.

Father Sheehy was hanged on a scaffold in Clonmel opposite St. Peters and Paul's Church, where there was a plaque to commemorate his death. His head was severed and stuck on a spike over Clonmel Gaol as a warning against agrarian violence. His head remained above the porch at Clonmel jail for ten or twenty[3] years.

His sister Catherine regularly visited the jail and was eventually given the head. She took it home in a bag under her arm and had it buried with the rest of his body beside the ruins of the old church of Shanrahan.

To this day, Father Sheehy is regarded as a martyr. In the late 19th century and early 20th century there was an effort to have him canonised.[6]

His trial and execution inflamed and polarised nationalist opinion, and had a great effect on his cousin Edmund Buck.

People visited his grave at Shanrahan cemetery near Clogheen to take clay, because it was rumoured to have healing powers. It is claimed that out of respect, birds didn't peck his head for the twenty years it was left on the spike.