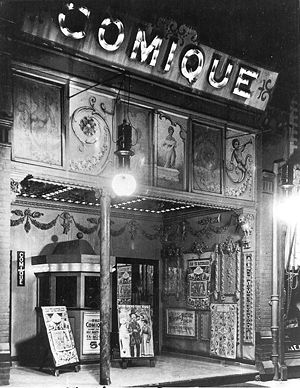 The nickelodeon was the first type of indoor exhibition space dedicated to showing projected motion pictures. Usually set up in converted storefronts, these small, simple theaters charged five cents for admission and flourished from about 1905 to 1915.

"Nickelodeon" was concocted from nickel, the name of the U.S. five-cent coin, and the ancient Greek word odeion, a roofed-over theater, the latter indirectly by way of the Odéon in Paris, emblematic of a very large and luxurious theater much as Ritz was of a grand hotel. For unknown reasons, in 1949 the lyricist of a popular song, Music! Music! Music!, incorporated the refrain "Put another nickel in, in the nickelodeon...", evidently referring to either a jukebox or a mechanical musical instrument such as a coin-operated player piano or orchestrion. The meaning of the word has been muddied ever since. In fact, when it was current in the early 20th century, it was used only to refer to a small five-cent theater and not to any coin-in-the-slot machine, including amusement arcade motion picture viewers such as the Kinetoscope and Mutoscope.[improper synthesis?]

The earliest films had been shown in "peep show" machines or projected in vaudeville theaters as one of the otherwise live acts. Nickelodeons drastically altered film exhibition practices and the leisure-time habits of a large segment of the American public. Although they were characterized by continuous performances of a selection of short films, added attractions such as illustrated songs were sometimes an important feature. Regarded as disreputable and dangerous by some civic groups and municipal agencies, crude, ill-ventilated nickelodeons with hard wooden seats were outmoded as longer films became common and larger, more comfortably furnished motion picture theaters were built, a trend that culminated in the lavish "movie palaces" of the 1920s.

Film historian Charles Musser wrote, "It is not too much to say that modern cinema began with the nickelodeons."[1]

The name "Nickelodeon" was first used in 1888 by Austin's Nickelodeon,[2] a dime museum located in Boston, Massachusetts. However, the term was popularized by Harry Davis and John P. Harris, who opened their small storefront theatre with that name on Smithfield Street in Pittsburgh, Pennsylvania, on June 19, 1905. They called it the Nickelodeon, joining "nickel" with the Greek word for an enclosed theater adopted by the 18th-century Odéon in Paris. Although it was not the first theater to show films, in 1919 a news article stated that it was the first theater in the world "devoted exclusively to exhibition of moving picture spectacles".[3] Davis and Harris found such great success with their operation that their concept of a five-cent theater showing movies continuously was soon imitated by hundreds of ambitious entrepreneurs, as was the name of the theater itself. Statistics indicated that the number of nickelodeons in the United States doubled between 1907 and 1908 to around 8000, and it was estimated that by 1910 as many as 26 million Americans visited these theaters every week.[4] Nickelodeons that were in converted storefronts typically seated fewer than 200, patrons often sat on hard wooden chairs, the screen was hung on the back wall, and a piano (and maybe a drum set) would be placed to the side of or below the screen. Larger nickelodeons sometimes had the capacity for well over 1000 people.[5] Louis B. Mayer came of age just as the popularity of the nickelodeon was beginning to rise; he renovated the Gem Theater in Haverhill, Massachusetts, converting it into a nickelodeon that he opened in 1907 as the Orpheum Theater, announcing that it would be "the home of refined entertainment devoted to Miles Brothers moving pictures and illustrated songs".[6] Other well-known nickelodeon owners were the Skouras Brothers of St. Louis.

Changes in film distribution and exhibition

Nickelodeons radically altered the mode of representation that corresponded with changes in the modes of distribution and the types of films being made. Around 1903, longer multi-shot films became more prevalent, and this shift brought about important innovations in the distribution of films with the establishment of "film exchanges".[5] Film exchanges would buy films from manufacturers and then rent them out to exhibitors. With a steady supply of different films, exhibitors finally had the ability to open venues where films were the central attraction. They did not have to worry about finding new audiences because the same audience would return again and again to watch different films. Exhibition practices greatly varied and programs lasted anywhere from ten minutes to an hour and a half or more in length. Often, programs ran continuously and patrons would join a program already in progress when they arrived and stay as long as they liked. While some nickelodeons only showed films, others offered shows that combined films with vaudeville acts or illustrated songs.[7]

The desirability of longer films, which enabled nickelodeons to grow the way they did, was the result of a number of factors. For one, economic competition between film production companies put pressure on them to create more elaborate, and often longer, films, to differentiate one film from another. Also, longer films were more attractive as the price paid by exhibitors depended on a film's length and the longer a film, the more profit there was to be made. Some exhibitors found longer films more desirable since it made programming easier, faster, and possibly cheaper, as they no longer had to organize their own programs by editing together a variety of short films. Directors had a great desire to make longer films because it meant greater artistic innovation as they tried to find new ways to engage audiences. The popularity of longer films also meant an increase in production of fictional films as actualities decreased. One of the possible reasons for this shift is that fiction films were often easier to plan and cheaper to film than actualities which were subject to various location-related difficulties. Fiction films, therefore, quickly became regularized, and the popularity of longer films meant that they outsold actualities, which were usually short.[5]

Early writers on American cinema history assumed that audiences at nickelodeons were primarily working-class people who could not afford a higher ticket price.[5] More recent historians, however, claim the importance of middle class audiences throughout the nickelodeon era and into the later 1910s. At the heart of the image of nickelodeons in traditional histories is the belief that movies were a proletarian amusement and that the "proper" middle-class stayed away until after World War I.[8] This idea is reflected in Lewis Jacobs' 1939 survey, where he writes: "Concentrated largely in poorer shopping districts and slum neighborhoods, nickelodeons were disdained by the well-to-do. But, the workmen and their families who patronized the movies did not mind the crowded, unsanitary, and hazardous accommodations most of the nickelodeons offered."[9] In his recent research, however, Robert C. Allen has debated that movies attracted a middle-class audience as illustrated by the location of earlier movie theaters in traditional entertainment districts. Allen writes that "In terms of social class, more nickelodeons were located in or near middle-class neighborhoods than in the Lower East Side ghetto."[10]

The nickelodeon boom in Manhattan between 1905 and 1907 has often functioned as historical shorthand for the rise of the movies in general.[8] Ben Singer writes in his analysis of Manhattan nickelodeons, "For most people ... the image of cramped, dingy nickelodeons in Manhattan's Lower East Side ghetto stands as a symbol for the cinema's emergence in America."[8] Nickelodeons consistently appeared in the densest areas of the city in terms of residential concentration and the amount of pedestrian traffic. Areas such as Union Square, Herald Square, 23rd Street, and 125th Street were obvious locations and the larger movie theaters popped up there. Neighborhood nickelodeons, which were the majority of movie theaters in Manhattan, were almost always located in neighborhoods with high residential densities and spread over a substantial number of blocks.[11]

Nickelodeons usually showed films about ten to fifteen minutes in length, and in a variety of styles and subjects, such as short narratives, "scenics" (views of the world from moving trains), "actualities" (precursors of later documentary films), illustrated songs, local or touring song and dance acts, comedies, melodramas, problem plays, stop action sequences, sporting events and other features which allowed them to compete with vaudeville houses.

The titles of a few of the films released in 1907 and distributed to nickelodeons by the Miles Brothers (Herbert, Harry and Earl C.) partially illustrate this diversity.

These are taken from a 1907 article published in The Saturday Evening Post:

Other 1907 films also distributed to nickelodeons by the Miles Brothers: 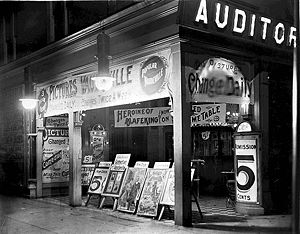 Though strong throughout the years from 1905 to 1913, nickelodeons became victims of their own success as attendance grew rapidly, necessitating larger auditoriums. Nickelodeons further declined with the advent of the feature film, and as cities grew and industry consolidation led to larger, more comfortable, better-appointed movie theaters. Longer films caused ticket prices to double from five cents to ten cents.[12] Although their heyday was relatively brief, nickelodeons played an important part in creating a specialized spectator, "the moviegoer", who could now integrate going to the movies into his or her life in a way that was impossible before. Miriam Hansen has noted that the term "spectator" had become common by 1910.[13] The nickelodeon explosion also increased the demand for new films, as thousands of theaters needed new product. The growth of longer films, which nickelodeons played a large part in stimulating, also led to the development of intertitles, which appeared in 1903 and helped make actions and scenes clearer as storylines became more complicated. A side-effect of this change was that it minimized the role of exhibitors, since they no longer had the editorial control of organizing single-shot films into programs, and now their narrative responsibility (some exhibitors would talk and help explain narratives as they unfolded) was also minimized by this "internal narration" in the film.[14]