From Infogalactic: the planetary knowledge core
Jump to: navigation, search
"Short name" redirects here. For the term as it applies to legislation, see short title. 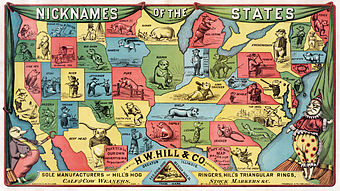 Map of the United States showing the state nicknames as hogs. Lithograph by Mackwitz, St. Louis, 1884. 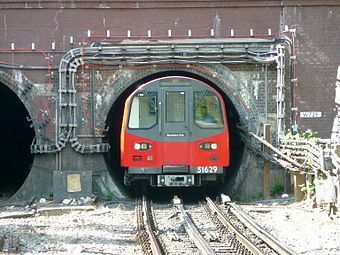 The London Underground is nicknamed "the Tube"

A nickname is a substitute for the proper name of a familiar person, place, or thing, for affection or ridicule.[1]

The term hypocoristic is used to refer to a nickname of affection between those in love or with a close emotional bond, compared with a term of endearment. The term diminutive name refers to nicknames that convey smallness, hence something regarded with affection or familiarity (e.g., referring to children), or contempt.[2]

The distinction between the two is often blurred. It is a form of endearment and amusement. As a concept, it is distinct from both pseudonym and stage name, and also from a title (for example, City of Fountains), although there may be overlap in these concepts.

A moniker also means a nickname or personal name.[3] The word often distinguishes personal names from nicknames that became proper names out of former nicknames. English examples are Bob and Rob, nickname variants for Robert.

A nickname is often considered desirable, symbolising a form of acceptance, but can sometimes be a form of ridicule.

The compound word ekename, literally meaning "additional name", was attested as early as 1303.[4] This word was derived from the Old English phrase eaca "an increase", related to eacian "to increase".[5] By the fifteenth century, the misdivision of the syllables of the phrase "an ekename" led to its reanalysis as "a nekename".[6] Though the spelling has changed, the pronunciation and meaning of the word have remained relatively stable ever since.

To inform an audience or readership of a person's nickname without actually calling them by their nickname, English nicknames are generally represented in quotes between the bearer's first and last names (e.g., Dwight David "Ike" Eisenhower, Daniel Lamont "Bubba" Franks, etc.). However, it is also common for the nickname to be identified after a comma following the full real name or later in the body of the text, such as in an obituary. The middle name is generally eliminated (if there is one), especially in speech. Like English, German uses (German-style) quotation marks between the first and last names (e.g., Andreas Nikolaus „Niki“ Lauda). Other languages may use other conventions; for example, Italian writes the nickname after the full name followed by detto 'called' (e.g., Salvatore Schillaci detto Totò), in Spanish the nickname is written in formal contexts at the end in quotes following alias (e.g. Alfonso Tostado, alias «el Abulense»), and Slovenian represents nicknames after a dash or hyphen (e.g., Franc Rozman – Stane). The latter may cause confusion because it resembles an English convention sometimes used for married and maiden names.

In Viking societies, many people had heiti, viðrnefni, or kenningarnöfn (Old Norse terms for nicknames) which were used in addition to, or instead of the first name. In some circumstances, the giving of a nickname had a special status in Viking society in that it created a relationship between the name maker and the recipient of the nickname, to the extent that the creation of a nickname also often entailed a formal ceremony and an exchange of gifts known in Old Norse as nafnfestr ('fastening a name').

Slaves have often used nicknames, so that the master who heard about someone doing something could not identify the slave. In capoeira, a Brazilian martial art, the slaves had nicknames to protect them from being caught, as practising capoeira was illegal for decades.[citation needed]

In Anglo-American culture, a nickname is often based on a shortening of a person's proper name. However, in other societies, this may not necessarily be the case.

In Indian society, for example, generally people have at least one nickname (call name or affection name) and these affection names are generally not related to the person's proper name. Indian nicknames very often are a trivial word or a diminutive (such as Bablu, Dabbu, Banti, Babli, Gudiya, Golu, Sonu, Chhotu, Raju, Adi, Ritu, etc.).

In Australian society, Australian men will often give ironic nicknames. For example, a man with red hair will be given the nickname 'Blue' or 'Bluey'. A tall man will be called 'Shorty', an obese person 'Slim' and so on.

In England, some nicknames are traditionally associated with a person's surname. A man with the surname 'Clark' will be nicknamed 'Nobby' (for no explicit reason beyond tradition, although clerks, in Colonial India were referred to by the Indian word 'Nobbi', and the surnames 'Clark' and 'Clarke' are variants of the occupation 'clerk'): the surname 'Miller' will have the nickname 'Dusty' (alluding to the flour dust of a miller at work): the surname 'Adams' has the nickname 'Nabby' (for no specific reason). There are several other nicknames linked traditionally with a person's surname, including Chalky White, Bunny Warren, Tug Wilson, and Spud Baker. Other English nicknames allude to a person's origins. A Scotsman may be nicknamed 'Jock', an Irishman 'Paddy' (alluding to St Patrick, the patron saint of Ireland) or 'Mick' (alluding to the preponderance of Roman Catholicism in Ireland), and a Welshman may be nicknamed 'Taffy'. (Traditional English nicknaming was common through the first half of the twentieth century, and was frequently used in the armed services during World War I and World War II, but has become less common since then.)

In Chinese culture, nicknames are frequently used within a community amongst relatives, friends and neighbors. A typical southern Chinese nickname often begins with a "阿" followed by another character, usually the last character of the person's given name. For example, Taiwanese politician Chen Shui-bian (陈水扁) is sometimes referred as "阿扁" (A-Bian). In many Chinese communities of Southeast Asia, nicknames may also connote one's occupation or status. For example, the landlord might be known simply as Towkay (Hokkien for "boss") to his tenants or workers while a bread seller would be called "Mianbao Shu" 面包叔 (literally, Uncle Bread). Amongst Cantonese-speaking communities, the character "仔" (pronounced "zai") may be used in a similar context of "Junior" in Western naming practices.

Many writers, performing artists, and actors have nicknames, which may develop into a stage name or pseudonym. A bardic name may also result from a nickname. Many writers have pen names which they use instead of their real names. Famous writers with a pen name go as far back as Plato (according to a late tradition) and Paul, and see also this List of pen names.

See also: Athletic nickname and List of sportspeople by nickname

It is not uncommon for sportspeople or a sports team to have nicknames. Some, such as those of sports clubs or athletic teams, are official while others are adopted over time.

In the context of information technology, a nickname (or technically a nick) is a common synonym for the screenname or handle of a user.

Nickname is a name to shorten a name. Nick is a term originally used to identify a person in a system for synchronous conferencing. In computer networks it has become a common practice for every person to also have one or more nicknames for the purposes of anonymity, to avoid ambiguity or simply because the natural name or technical address would be too long to type or take too much space on the screen.

File:Carter-inauguration-large.jpg
"I, Jimmy Carter..." James Earl Carter is sworn in as President of the United States using his nickname "Jimmy".

Nicknames are usually awarded to, not chosen by the recipient. Some nicknames are derogatory name calls. Note: the majority of the following examples are American English usage. Nicknames may be based on a person's name or various attributes. Attributes upon which a nickname may be based include:

They may refer to a person's occupation, social standing, or title. They may also refer to characteristics of a person. 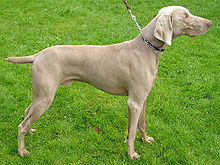 The Weimaraner's coat color led to its nickname of the "Silver Ghost".

Sometimes nicknames are based on things that are not a part of a person's body, but alter a person's physical appearance. Such nicknames can be temporary.

All of the above examples would be offensive in most contexts.

A nickname may allude to a person's apparent intelligence (though often used sarcastically):

A nickname can be a shortened or modified variation on a person's real name.

They may refer to the relationship with the person. This is a term of endearment.

And other variations on the surname, such as:

It may relate to a specific incident or action.

It may compare the person with a famous or fictional character.

It may be related to their place of origin or residence.

It may be derived from or related to what the person is well known for.

It may refer to a person's political affiliation. 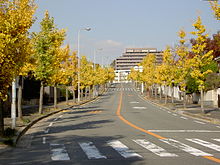 Many geographical places have titles, or alternative names, which have positive implications. Paris, for example, is the "City of Light", Venice is "La Serenissima", and New Jersey is the "Garden State". It is not correct to call these titles nicknames; these alternative names are often used to boost the status of such places, contrary to the usual role of a nickname. Many places or communities, particularly in the USA, adopt titles because they can help in establishing a civic identity, help outsiders recognize a community or attract people to a community, promote civic pride, and build community unity.[7] Titles and slogans that successfully create a new community "ideology or myth"[8] are also believed to have economic value.[7] Their economic value is difficult to measure,[7] but there are anecdotal reports of cities that have achieved substantial economic benefits by "branding" themselves by adopting new slogans.[8] By contrast, older city nicknames may be critical; London is still occasionally referred to as "The Smoke" in memory of its notorious "Pea-Souper" Smogs (smoke-filled fogs) of the 19th and early 20th centuries, and Edinburgh was "Auld Reekie" for the same reason, as countless coal fires polluted its atmosphere.

Collective nicknames of inhabitants of a geographical place

Besides or replacing the demonym, some places have collective nicknames for their inhabitants. Many examples of this practice are found in Wallonia and in Belgium in general, where such a nickname is referred to in French as "Blason populaire".