Nicola Ann "Nicky" Morgan (née Griffith; born 1 October 1972) is a British Conservative Party politician who has been the Member of Parliament (MP) for Loughborough since 2010 and has been the Secretary of State for Education and Minister for Women and Equalities since July 2014.[1] She previously served in Her Majesty's Treasury as Economic Secretary to the Treasury from October 2013 to April 2014 and as Financial Secretary to the Treasury from April to July 2014. 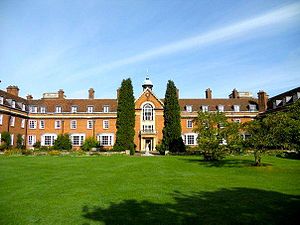 Morgan was born in Kingston upon Thames, Surrey. She grew up in Surbiton and attended the private, fee-paying Surbiton High School before studying Jurisprudence at St Hugh's College, Oxford. Elected Treasurer of the Oxford Union Society, she however failed in her bid for its Presidency.

She qualified as a solicitor in 1994 and worked as a corporate lawyer at Travers Smith specialising in mergers and acquisitions before taking on an in-house counsel role advising on corporate law matters.[2]

In the 2010 General Election Morgan was elected as the MP for Loughborough on a swing of 5.5% with a majority of 3,744 votes.[4] She made her maiden speech in a debate on Economic Affairs and Work and Pensions on 8 June 2010.[5]

In June, 2010, she was selected as a Conservative member of the Business, Innovation and Skills Committee but was replaced following promotion in September to Parliamentary Private Secretary to the Universities and Science Minister, David Willetts.[6]

She was appointed assistant whip in September 2012,[7] and Economic Secretary to the Treasury on 7 October 2013.[8]

Minister for Women and Equalities

In 2013, Morgan voted against the introduction of same-sex marriage in England and Wales, arguing that marriage could only be between a man and a woman.[9]

Following the resignation of Maria Miller from the Cabinet, she became Minister for Women (attending Cabinet) on 9 April 2014 and was appointed a Privy Councillor.[10] However, the equalities brief went to Sajid Javid, the culture secretary.[11]

The separation of the equalities portfolio was seen by some as in response to the fact that Morgan had voted against the government's proposal to introduce legislation allowing same-sex marriages, and led to accusations that Morgan was merely "minister for straight women".[12][9] On her promotion, she retained her post as Minister for Women and also added the equalities brief to it, thus also becoming Minister for Women and Equalities.[13] However, Downing Street announced that responsibility for implementing the rest of the changes to same-sex marriage would be driven by Nick Boles, a new education minister who is himself gay and is in a civil partnership.[12]

In October 2014, she clarified her views saying she had previously voted against gay marriage as she believed her constituents were opposed to it. However she would now support it and she wished "supporters of same-sex marriage had been more vocal about their position before vote in July last year."[14] She expressed support for Ireland's 'yes' vote on same-sex marriage in May 2015.[15]

Secretary of State for Education

In September 2014 Morgan was questioned by Parliament's Education Select Committee following a report by London University’s Institute of Education on conflicts of interest between academies and their financial backers. The report failed to find evidence that academies were undertaking competitive tendering or that they were being properly monitored by the Education Funding Agency (EFA). It also said that previous reports had also questioned the capability of the EFA to fund and finance academies. Graham Stuart, chairman of the committee acknowledged that there were loopholes but said the public needed to be sure that sponsors acted exclusively in the interests of their school.[17]

Following concerns from business leaders that children were leaving school without good team-member skills Morgan stated that character development is as important as academic achievement. In December 2014, she announced £3.5 million of funding to promote the building of "grit" and "resilience." Some schemes were likely to be involve ex-servicemen teaching pupils – particularly those with behaviour problems – the importance of discipline. The Telegraph reported potential concerns about maths, English and science being effectively downgraded.[18]

Criticism by the UK Statistics Authority

In December 2014 Morgan was advised by Sir Andrew Dilnot, chair of the UK Statistics Authority that she should “reconsider her comments” and possibly “take advice” about misleading information given to Parliament. Morgan had claimed that one third of children under the previous Labour government had left primary school unable to read or write. In fact 91% of 11-year-old pupils tested in May 2010 had reached at least level 3 of Key Stage 2 -defined as being able "read a range of texts fluently and accurately" whilst 83% achieved level 4 -the expected level. The BBC noting that 64% achieved expected results in all subjects tested suggests Morgan had both misunderstood official literacy level definitions and confused literacy results with expected overall attainment levels.[19]

In an interview with The Observer in December 2014 Morgan - who has been engaged in a long running “battle with Michael Gove” over policy - expounded her views on her relationship with her predecessor.[20] Her friends have denied that she is subservient to Gove,[20] whilst Morgan herself has rejected Gove’s attitude to the educational establishment -which he describes as ‘a left wing blob.’[21] Morgan told The Observer that although Gove’s combative style alienated teachers, she fully supports his key policies -the introduction of free schools and the expansion of academies.[20]

Writing in The Times the following day, Sir Anthony Seldon, headmaster of Wellington College and a key Gove ally, claimed that Morgan knew little about schools and had accepted the education portfolio despite an initial lack of interest. She needed more radical policies to get schools to develop pupils who were “rounded, resilient citizens” but her “probable departure at the election” meant she was unlikely to make any sort of mark.[22]

The 2014 school league tables published in January 2015 excluded some results from fee-paying schools using International GCSEs (IGCSEs) which Morgan regards as not rigorous or challenging enough. The schools have exactly the opposite view but the move placed many of them, including Eton near the bottom of the tables. Writing to The Daily Telegraph, the chief executive of Cambridge assessment, Simon Lebus said Morgan had been poorly advised and that admission tutors agreed that the exams were the best preparation for university. He said the Department of Education should encourage competition—a race to the top between the two exam types—rather than "trying to rig the race". Morgan appealed to the fee-paying schools to return to conventional GCSEs.[23]

In December 2015 Morgan declared that a High court ruling that religious teaching should be pluralistic and that therefore it was unlawful to exclude atheism -should be ignored as UK religious traditions are mainly Christian. The Independent also noted that both she and her department had also ignored the Commission on Religion and Belief in British Public Life report that Britain is "no longer predominantly Christian."[24]

In December 2015 Dr Terry Riley the chair of the British Deaf Association and former presenter of See Hear wrote an open letter to Morgan appealing for her intervention to save the Royal School for Deaf Children in Margate, first opened in 1792.[25]

Professor Stephen Fisher of Oxford University, writing for the Higher Education Policy Institute think tank, observed in December 2014 that Loughborough was one of 10-11 constituencies where the student vote could affect the outcome. Loughborough was one of several Tory marginals with a student population of more than 13% and he noted Morgan as being at risk of losing her seat in 2015.[26] In the event, Morgan increased her majority achieving a 5.25% swing compared to a -0.3% swing nationally.

In July 2010, Morgan asked the Prime Minister to join her in congratulating Loughborough University Student Union Rag Committee on raising more money on behalf of the Royal British Legion than any other rag in the country.[27] Both agreed it was an example of the Big Society in action.[27]

On 7 November 2010, Morgan appeared on the Politics Show with Lucy Hopkins, Loughborough Students' Union President, to continue an earlier on-campus debate on the tripling of student tuition fees. Morgan agreed costs could be daunting but said student numbers were unsustainable, it was fair to ask people to invest in their own education and people should ask more questions about how courses would improve prospects.

Hopkins accepted that the Government had tried to find fair options but said students were taking on "excessive debts" which they would still be paying off when their own children went to university, they had no guarantee of a better job and those from poor homes would either have to choose an affordable university or not attend. In response, Morgan said university wasn't a rite of passage, there were other ways of continuing education and she herself had taken eight years to pay off her debts. [28]

In January 2014, speaking at a meeting of the Bright Blue Tory think tank, Morgan said Conservatives must send out an optimistic message and not just "the language of hate" if they were to win the next general election. Her comments were thought to show concern at right wing backbenchers' criticisms of Cameron on immigration, welfare and the EU though a party source insisted that she was talking about very few people.[29]

Following Stephen Dorrell's "surprising" announcement in November 2014 he was standing down, Morgan described him as a really important figure in Leicestershire but "categorically denied" she would consider switching to the safer Charnwood seat.[30]

The Guardian also highlighted donations from Paul Mercer, a Conservative activist, former councillor and constituent who runs a local radio campaign on Morgan's behalf. Mercer is known to have worked for a "secretive corporate security firm" with a history of infiltrating and spying on political campaigners and according to The Guardian, he passed confidential legal advice to their opponents.[32]

In October 2015, Morgan speculated that she would consider running for leader of the Conservative Party, should David Cameron stand down before the next general election.[33]

Morgan and her husband, architect Jonathan, have a son, born in January 2008. She has described her "passion for recreational running” on her webpage[34] and in February 2015 a raffle prize of joining Morgan on a 5k run followed by breakfast was offered at the Conservative Party's 'Black and White Ball' fundraiser.[35]