Nicolas Poussin (French: [nikɔlɑ pusɛ̃]; June 1594 – 19 November 1665) was the leading painter of the classical French Baroque style, although he spent most of his working life in Rome. His work is characterized by clarity, logic, and order, and favors line over color. Until the 20th century he remained a major inspiration for such classically oriented artists as Jacques-Louis David, Jean-Auguste-Dominique Ingres and Paul Cézanne.

He worked in Rome for a circle of leading collectors from there and elsewhere, except for a short period when Cardinal Richelieu ordered him back to France to serve as First Painter to the King. Most of his works are history paintings of religious or mythological subjects that very often have a large landscape element. 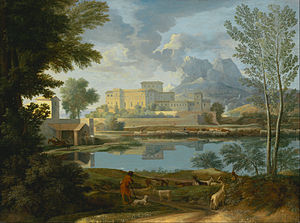 Nicolas Poussin's early biographer was his friend Giovanni Pietro Bellori,[1] who relates that Poussin was born near Les Andelys in Normandy and that he received an education that included some Latin, which would stand him in good stead. Early sketches attracted the notice of Quentin Varin, a local painter, whose pupil Poussin became, until he ran away to Paris at the age of eighteen. There he entered the studios of the Flemish painter Ferdinand Elle and then of Georges Lallemand, both minor masters now remembered for having tutored Poussin. He found French art in a stage of transition: the old apprenticeship system was disturbed, and the academic training destined to supplant it was not yet established by Simon Vouet. In Paris, Poussin was impressed by Italian art he viewed in the royal collection, and studied engravings after Raphael and Giulio Romano.[2]

He attempted to travel to Rome, but after reaching Florence he was forced, perhaps by ill health, to return to Paris.[3] In 1622 he met Giambattista Marino, the court poet to Marie de Medici, at Lyon. Marino employed him on illustrations for a projected edition of Ovid's Metamorphoses.[4] These "Marino drawings" preserved at Windsor Castle are among the very few identifiable works of Poussin executed before his arrival in Rome.[5] Marino took him into his household, and in 1624 enabled Poussin (who had been detained by commissions in Lyon and Paris) to rejoin him at Rome. It has been suggested that it was this early friendship with Marino, and the commissioning of illustrations of his Ovidian poetry, that founded, or at least reinforced, the prominent eroticism in Poussin's early work.[6]

Poussin was thirty when he arrived in Rome in 1624. At first he lodged with Simon Vouet.[7] Through Marino, he had been introduced to Marcello Sacchetti who in turn introduced him to another of his early patrons, Cardinal Francesco Barberini. Financial difficulties arose with the departure to Spain of Barberini, accompanied by Cassiano dal Pozzo, the antiquarian and the Cardinal's secretary, who later would become a great friend and patron. However, their return from Spain in 1626 stabilized Poussin’s position, with renewed patronage by the Barberini and their circle. Two major commissions at this period resulted in Poussin's early masterwork, the Barberini Death of Germanicus (1628), partly inspired by the reliefs of the Meleager sarcophagus,[8] and the commission for St. Peter's that amounted to a public debut, the Martyrdom of St. Erasmus (1629, Vatican Pinacoteca), indebted to designs on the same subject by the contemporary Baroque painter, Pietro da Cortona.[9] He fell ill at this time and was taken into the house of his compatriot Jacques Dughet, where he was nursed by Dughet’s daughter, Anna Maria, who Poussin married in 1630. His two brothers-in-law were artists and Gaspard Dughet later took Poussin’s surname.[10]

During the late 1620s and 1630s, he experimented and formulated his own style. He studied the Antique as well as works such as Titian’s Bacchanals (The Bacchanal of the Andrians, Bacchus and Ariadne, and The Worship of Venus) at the Casino Ludovisi and the paintings of Domenichino and Guido Reni.[11] At the same time, the Roman Baroque was emerging: in the 1620s Cortona was producing his early Baroque paintings for the Sacchetti family; Bernini, having established his reputation in sculpture, was designing the great bronze baldachin in St. Peter’s; and an ingenious architectural imagination was emerging in works by Borromini.

Poussin became acquainted with other artists in Rome and tended to befriend those with classicizing artistic leanings: the French sculptor François Duquesnoy whom he lodged with in 1626; the French artist Jacques Stella; Claude Lorraine; Domenichino; Andrea Sacchi; and joined an informal academy of artists and patrons opposed to the current Baroque style that formed around Joachim von Sandrart.

At the time the papacy was Rome’s foremost patron of the arts. Poussin’s Martyrdom of St. Erasmus for St. Peter’s was Poussin’s only papal commission, secured for him by Cardinal Barberini, the papal nephew, and Poussin was not asked again to contribute major altarpieces or paint large scale decorations for a pope.[12] His subsequent career depended on private patronage. Apart from Cardinal Francesco Barberini, his first patrons included Cardinal Luigi Omodei, for whom he produced the Triumphs of Flora (c 1630–32, Louvre); Cardinal de Richelieu, who commissioned various Bacchanals; Vincenzo Giustiniani, for whom he painted the Massacre of the Innocents (uncertain early date, Museé Condé, Chantilly);[13] Cassiano dal Pozzo who became the owner of the first series of the Seven Sacraments (late 1630s, Belvoir Castle); and Paul Fréart de Chantelou, with whom Poussin, at the call of Sublet de Noyers, returned to France in 1640.

Louis XIII conferred on him the title of First Painter in Ordinary. In two years at Paris he produced several pictures for the royal chapels (the Last Supper, painted for Versailles, now in the Louvre), eight cartoons for the Gobelins tapestry manufactory, the series of the Labors of Hercules for the Louvre, the Triumph of Truth for Cardinal Richelieu (Louvre), and much minor work.

In 1642, disgusted by the intrigues of Simon Vouet, Fouquières and the architect Jacques Lemercier, Poussin withdrew to Rome. There, in 1648, he finished for de Chantelou the second series of the Seven Sacraments (Bridgewater Gallery), and also his noble Landscape with Diogenes (Louvre). This painting shows the philosopher discarding his last worldly possession, his cup, after watching a man drink water by cupping his hands.[14] In 1649 he painted the Vision of St Paul (Louvre) for the comic poet Paul Scarron, and in 1651 the Holy Family (Louvre) for the duc de Créquy. Year by year he continued to produce an enormous variety of works, many of which are included in the list given by Félibien.

He suffered from declining health after 1650, and was troubled by a worsening tremor in his hand, evidence of which is apparent in his late drawings.[15] He died in Rome on 19 November 1665 and was buried in the church of San Lorenzo in Lucina, his wife having predeceased him. Chateaubriand in 1820 donated the monument to Poussin.

Poussin left no children, but he adopted as his son Gaspard Dughet (Gasparo Duche), his wife's brother, who became a painter and took the name of Poussin. 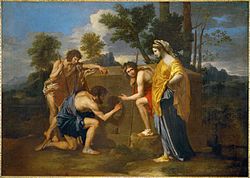 Throughout his life Poussin stood apart from the popular tendency toward the decorative in French art of his time. In Poussin's works a survival of the impulses of the Renaissance is coupled with conscious reference to the art of classical antiquity as the standard of excellence. His goal was clarity of expression achieved by disegno or ‘nobility of design’ in preference to colore or color.[16] Perhaps his concern with disegno can best be seen in the line engraved copies of his works; among the many who reproduced his paintings, some of the most successful are Audran, Claudine Stella, Picart and Pesne.

Themes of tragedy and death are prevalent in Poussin's work.[17] Et in Arcadia ego, a subject he painted twice (second version is seen at right), exemplifies his cerebral approach. In this composition, idealized shepherds examine a tomb inscribed with the title phrase, which is usually interpreted as a memento mori: "Even in Arcadia I exist", as if spoken by personified Death. According to art historian Christopher Wright, Poussin intended his figures to "display the most distilled and most typical attitude and emotion for the role they were playing", but he was concerned with emotion "in a generalized and not specific way ... Thus in both compositions of Et in Arcadia Ego (Chatsworth and Louvre) the theme is the realization of death in life. The specific models hardly matter. We are not intended to have sympathy with them and instead we are forced by the artist to think on the theme."[17]

Poussin is an important figure in the development of landscape painting. In his early paintings the landscape usually forms a graceful background for a group of figures; later he progressed to the painting of landscape for its own sake, although the figure is never entirely absent. Examples are Landscape with St. John on Patmos (1640; Art Institute of Chicago) and Landscape with a Roman Road (1648; Dulwich Picture Gallery).[18]

Poussin was a prolific artist. Among his many works are: 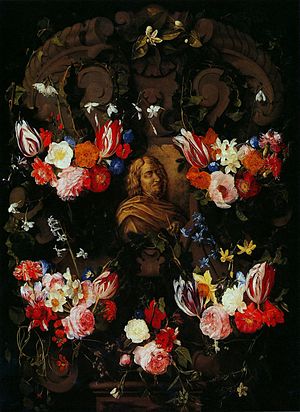 Cartouche with the bust of Nicolas Poussin in the garland of flowers, Daniel Seghers, c. 1650–1651, National Museum, Warsaw

Poussin has been called "the springboard for the greatest French artists from David to Matisse" by Michael Kimmelman, who says "his work, in its lucidity, intelligence and measured sensuality, exemplifies what makes French art French".[20]

Initially, Poussin's genius was recognized only by small circles of collectors. (In the two decades following his death, a particularly large collection of his works was amassed by Louis XIV.)[21] At the same time, it was recognized that he had contributed a new theme of "classical severity" to French art. His style was imitated by many of his contemporaries, and influenced the work of French artists such as Jacques Stella and Sébastien Bourdon, the Italian painter Pier Francesco Mola, and the Dutch painter Gerard de Lairesse.[22]

Poussin's example remained a strong influence on the academic tradition in European painting until the late 19th century.[23] Jacques-Louis David resurrected a style already known as "Poussinesque" during the French Revolution in part because the leaders of the Revolution looked to replace the frivolity and oppression of the court with Republican severity and civic-mindedness, most obvious in David's dramatic canvas of Brutus receiving the bodies of his sons, sacrificed to his own principles, and the famous Death of Marat. Benjamin West, an American painter of the 18th century who worked in Britain, found inspiration for his canvas of The Death of General Wolfe in Poussin's The Death of Germanicus.[24]

Throughout the 19th century, Poussin, available to the ordinary person's gaze because the Revolution had opened the collections of the Louvre, was inspirational for self-reflexive artists who pondered their own work methods. Cézanne, who was described in 1907 by Maurice Denis as "the Poussin of Impressionism",[25] was quoted as saying that he wanted to "re-do Poussin over again after nature".[26] Georges Seurat was another Post-Impressionist artist who admired the formal qualities of Poussin's work. Also appealing was the eroticism of some of Poussin's classicizing subjects.

In the 20th century, art critics have suggested that the "analytic Cubist" experiments of Pablo Picasso and Georges Braque were founded upon Poussin's example.[27] In 1963 Picasso based a series of paintings on Poussin's The Rape of the Sabine Women. The work of Jean Hugo was also influenced by Poussin.

The most famous 20th-century scholar of Poussin was the Englishman Anthony Blunt, Surveyor of the Queen's Pictures, who in 1979 was disgraced by revelations of his complicity with Soviet intelligence.[28]

Today, Poussin's paintings at the Louvre reside in a gallery dedicated to him.