Nicosia (Gallo-Italic of Sicily: Nẹcọscia; Sicilian: Nicusìa) is a village and comune of the province of Enna in Sicily, southern Italy. Nicosia, along with Troina are the northernmost towns in the province of Enna. The vicinity traditionally contained are salt mines and arable lands.

The origin of Nicosia is uncertain; Engio, Erbita and Imachara are the three cities of antiquity with which historians have attempted to identify Nicosia with, but there is no evidence that the mentioned towns are in fact Nicosia. The present name of the town suggests Greek origins: it is believed to get its name from Saint Nicholas (Νίκου Οίκος). Another theory suggests it is a derivative of the Greek saying "City of Victory" (Νίκης Οίκος). The town is believed to stand on the site of the ancient Engynum. The modern town was founded by Byzantine colonists in the 6th century. It expanded under the Arab domination and later under that of the Normans, who settled numerous immigrants from Lombardy and Piedmont, called "Lombards", giving rise to the Gallo-Italic dialect still spoken in the town and surrounds. King William II made Nicosia a royal city. It played an important strategic role, favoured by its position halfway between Palermo and Messina. It often gave hospitality to important figures, including Emperor Charles V. 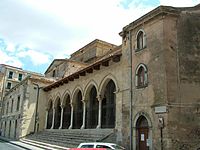 There are also remains of the Castle, in the upper part of the town.