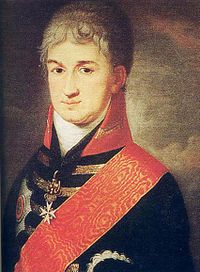 Nikolay Petrovich Rezanov (Russian: Николай Петрович Резанов) (1764 – 1807) was a Russian nobleman and statesman who promoted the project of Russian colonization of Alaska and California to three successive Tsars—Catherine the Great, Paul, and Aleksander I. Aleksander I commissioned him as Russian ambassador to Japan (1804) to conclude a commercial treaty. In order to get there he was appointed co-commander of the First Russian circumnavigation (1803-1806), led by Adam Johann von Krusenstern. Rezanov departed the expedition when it reached Kamchatka after visiting Japan where he was unsuccessful in his ambassadorial mission. He was also the author of a lexicon of the Japanese language and of several other works, which are preserved in the library of the Saint Petersburg Academy of Sciences, of which he was a member. Rezanov's biggest legacy was the great Russian American Company.

Rezanov was born in Saint Petersburg on March 28, 1764. He mastered five languages by the age of 14. He joined the Izmaylovsky Regiment at the same age and left five years later in 1784 as captain.[1] Rezanov then spent five years as a court officer in Pskov.[2] In 1791, he joined the staff of Gavrila Derzhavin in his capacity as the private secretary to the Empress Catherine. Platon Zubov took interest in Rezanov, hiring him as an aide within a year of his employment with Derzhavin.[3] Zubov became interested in the fur trade activities of Irkutsk merchant Grigory Shelikhov. His influence with Catherine II was used to secure priests from the Valaam Monastery and colonists for Shelikov's settlements on Kodiak Islands.

In the winter of 1793 Rezanov was appointed as Zubov's personal representative to oversee the fledlging operations.[4] In August 1794 Rezanov arrived at Irkutsk, the center of the Shelikhov-Golikov Company, a city where his father Pyotr had once served as a civil servant for several decades.[5] He likely joined Shelikhov in visiting Kyakhta during the annual trading with the Qing Empire.[6] Rezanov found the land routes to China "inefficient and archaic" when compared to the naval trade of the British in Guangzhou.[6] In January 1795 he married Shelikhov's 14-year-old daughter Anna, who came with a dowry in shares of Shelikhov's company.[7] Anna died in childbirth seven years later.[6] Rezanov became a partner in the company, rapidly developing into a keen and tireless man of business. At the death of Shelikhov later in 1795, he became the leading spirit of the wealthy and amalgamated company, but felt marginalized and harassed because the heir to the company was Shelikhov's formidable wife Natalia.[8] Rezanov resolved to develop the company by obtaining for himself and his partners a royal charter with monopoly privileges to exploit and rule, like the privileges granted by Great Britain to the East India Company. 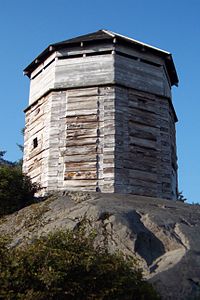 A replica of Russian Block House #1 (one of three watchtowers that guarded the stockade walls at Novo-Arkhangelsk) as constructed by the National Park Service in 1962.

Rezanov had just succeeded in persuading Catherine II to sign his charter when she died (1796), forcing him to begin again to obtain a charter from the unbalanced and intractable Tsar Paul I. For a time the outlook appeared hopeless, but Rezanov's skill, subtlety and address prevailed, and he obtained the Tsar's signature to the Ukase of 1799 shortly before the Tsar was assassinated. The Russian-American Company (RAC) was granted a monopoly over the Pacific Northwest coast of North America, from latitude 55 degrees northward, roughly the southern border of Alaska today; and over the chain of islands extending from Kamchatka northward to Alaska and southward to Japan for a period of twenty years. As a civil servant, Rezanov couldn't be directly named a director of the company, so he was officially designated the RAC's "High Representative in the Capital."[9] The majority of the shares were owned by the Shelikhov family, although Rezanov, Tsar Paul, the future Tsar Alexander I of Russia and Grand Duke Constantine Pavlovich were also shareholders. Initially the company turned a favorable profit until the first years of the 19th century, after which mismanagement and scarcity of nourishing food threatened it with serious losses, if not ultimate ruin.

In order to get a fleet to the area, the First Russian circumnavigation was undertaken, with Rezanov on board, taking the route from St Petersburg to Brazil to the Kingdom of Hawaii to Kamchatka. The ships would not only supply the colonies in America but also begin a Russian fur trade between Alaska, Japan and China, and collect scientific data.[10] Rezanov was appointed as minister plenipotentiary and given the special assignment of opening diplomatic relations with the isolationist Tokugawa Shogunate. Before reaching Japan, the Russians visited Hawaii where they learned of the destruction of the Russian colony of Redoubt Saint Michael in America.[11] The Neva, one of the two ships in the expedition, was dispatched north on 31 May 1804 and was critical in taking back Saint Michael in the Battle of Sitka later that year. Rezanov was impressed with the agricultural potential of the Hawaiian Islands, exclaiming that "All of Siberia might be supplied by sugar from Owhyhee".[11] On board the Nadezhda, Rezanov and the remaining crew under Adam Johann von Krusenstern sailed for Petropavlovsk.

Finally departing for Japan in the autumn of 1804, the Nadezhda entered Nagasaki Bay in September. Rezanov didn't endear himself with his hosts, a Japanese translator telling him that "All of Japan is talking of you and saying that you are different from the Dutch, prouder, more heated and that you look down on the Japanese".[12] After many months of waiting for the Shogun's decision about opening trade relations with Russia, first isolated on board ship, then confined in a small compound on shore, the Russians left Nagasaki on 5 April 1805, their efforts at opening trade an embarrassing failure.[12]

Nadezhda returned to Petropavlovsk on 24 May 1805, where Rezanov found orders directing him to remain in the Russian colonies as Imperial inspector and plenipotentiary of the company, and to correct the abuses that were ruining the great enterprise. He departed on the Maria on 28 July for Novo-Arkhangelsk by way of the Aleutian islands. While touring the colonies, Rezanov established measures to protect the fur-bearing animals from reckless slaughter, especially on the Pribilof Islands, along with punishing or banishing the worst offenders against the company's laws. Additionally he established several schools and libraries, donating some of his own books, and he established cooking schools that flourished briefly.

Conditions in the colonies were harsh; housing was primitive, and food was scarce, with many supply ships being lost at sea. In 1806 the colonists at Sitka were dying of scurvy and starvation. In desperation, on 26 Feb. 1806 Rezanov put together a small crew and left Sitka sailing south on the Juno on a life-or-death expedition to California to buy food and supplies from Russia's chief competitor in colonizing the Pacific coast, the Spanish.[13] Sick with hunger and scurvy, they arrived under the guns of the Spanish overlooking San Francisco Bay on 27 March, meeting with the comandante of San Francisco, Don José Darío Argüello. During a stay of six weeks, Rezanov was successful in bartering and buying wheat, barley, peas, beans, flour, tallow, salt and other items. Departing on 10 May, he reached Sitka on 8 June.[14]:51–55,59 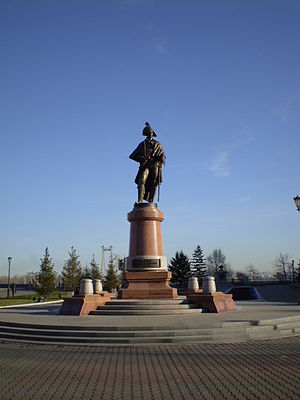 The Ryazanov Monument in Krasnoyarsk

Rezanov had begun a love affair with the 15-year-old daughter of the comandante Concepción Argüello ("Conchita"). The couple became engaged, causing a sensation in the tight-knit California society, especially because of their differences in religion and nationality, but Rezanov's diplomatic skill won over the clergy. Rezanov had the promise of the perplexed governor to forward a copy of the treaty to Spain at once. He proceeded to Petropavlovsk, where he dispatched his ships, without the consent of the Tsar——in effect declaring war on his own——to attack the Japanese island Sakhalin of the lower Kuril group.[15] Rezanov then began the overland trip to Saint Petersburg, hoping to obtain the Tsar's approval for the treaty. He wrote personal letters to the Pope and to the King of Spain asking dispensation and royal consent for his marriage.

He died of fever and exhaustion in Krasny Yar (now Krasnoyarsk), Siberia, on March 8, 1807.[16] His grave was destroyed by bolsheviks, but his remains were reburied. On October 28, 2000, at Rezanov’s grave in the Trinity churchyard of Krasnoyarsk (where according to one account his remains were moved in the late 1950s) there was a service for the dead and the dedication of a memorial to Rezanov. Poets had taken up the story of Rezanov and Conchita, turning it into a famous romance in Russia. The memorial has a white cross, bearing on one side the inscription “Nikolai Petrovich Rezanov 1764 — 1807. I will never forget you”, and on the other side — “Maria Concepcion de Arguelio 1791 — 1857. I will see you never more”. 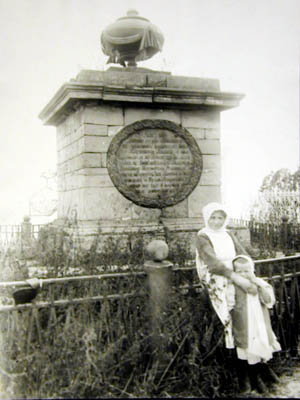 The treaty with California, the bare suggestion of which made such a commotion far away in the land of New Spain, was the least of Rezanov's projects. It was sincerely conceived, for he was deeply and humanely concerned for his employees and the wretched natives who were little more than the slaves of the company; but its very obviousness raised the necessary amount of dust.

His correspondence with the company betrays a clearly defined purpose to annex to Russia the entire western coast of North America, and to encourage immediate emigration from the parent country on a large scale. Had he lived, there is, all things considered, hardly a doubt that he would have accomplished his object. The treaty was never signed, the reforms of Rezanov died of discouragement, the fortunes of the colonies gradually collapsed, and the Spanish girl who had loved Rezanov became a nun.

In 1979, the composer Alexei Rybnikov and the poet Andrey Voznesensky wrote one of the first Russian rock operas, choosing the love affair of Rezanov and Concepcion as their subject and naming the opera after two of Rezanov's ships, Juno and Avos. The original production has enjoyed immense success in the Lenkom Theatre and is still being performed to standing ovations as of 2013. The original actor playing Rezanov from 1979–2005, Nikolai Karachentsov, was seriously injured in a car crash in 2005, and has been replaced in the production by Dmitry Pevtsov and Viktor Rakov.

The High Mass for the two lovers was attended by Gary E. Brown, Police Chief of the city of Monterey, California. He was in Siberia as part of a Pointman Leadership Institute team to instruct the National Police in Ethical Based Leadership. Chief Brown scattered on Rezanov’s tomb some earth from Conchita’s grave, and at the suggestion of Monterey resident John Middleton, a rose from her burial site, and took some earth from Rezanov’s grave to scatter on the resting place of Concepcion de Arguello in Benicia, CA. “It will connect them forever in a symbolic way” said the chief. He went on to share that the love story which took place 200 years ago forever united the cities of Krasnoyarsk and Monterey.