From Infogalactic: the planetary knowledge core
Jump to: navigation, search
For the municipality in Crete, see Nikos Kazantzakis (municipality).

Nikos Kazantzakis (Greek: Νίκος Καζαντζάκης; 18 February 1883 – 26 October 1957) was a Greek writer, celebrated for his novels which include Zorba the Greek (published 1946 as Life and Times of Alexis Zorbas), Christ Recrucified (1948), Captain Michalis (1950, translated 'Freedom or Death), and The Last Temptation of Christ (1955). He also wrote plays, travel books, memoirs and philosophical essays such as The Saviors of God: Spiritual Exercises.

His fame was further spread in the English speaking world by cinematic adaptations of Zorba the Greek (1964) and The Last Temptation of Christ (1988). 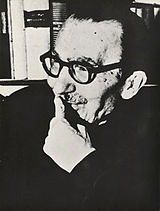 When Kazantzakis was born in 1883 in Heraklion, Crete had not yet joined the modern Greek state, (which had been established in 1832) and was still under the rule of the Ottoman Empire. From 1902 Kazantzakis studied law at the University of Athens, then went to Paris in 1907 to study philosophy. Here he fell under the influence of Henri Bergson. His 1909 dissertation was titled "Friedrich Nietzsche on the Philosophy of Right and the State." Upon his return to Greece, he began translating works of philosophy. In 1914 he met Angelos Sikelianos. Together they travelled for two years in places where Greek Orthodox Christian culture flourished, largely influenced by the enthusiastic nationalism of Sikelianos.

Kazantzakis married Galatea Alexiou in 1911; they divorced in 1926. He married Eleni Samiou in 1945. Between 1922 and his death in 1957, he sojourned in Paris and Berlin (from 1922 to 1924), Italy, Russia (in 1925), Spain (in 1932), and then later in Cyprus, Aegina, Egypt, Mount Sinai, Czechoslovakia, Nice (he later bought a villa in nearby Antibes, in the Old Town section near the famed seawall), China, and Japan. While in Berlin, where the political situation was explosive, Kazantzakis discovered communism and became an admirer of Vladimir Lenin. He never became a committed communist, but visited the Soviet Union and stayed with the Left Opposition politician and writer Victor Serge. He witnessed the rise of Joseph Stalin, and became disillusioned with Soviet-style communism. Around this time, his earlier nationalist beliefs were gradually replaced by a more universalist ideology. 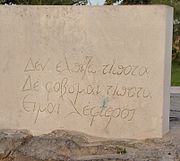 Epitaph on the grave of Kazantzakis in Heraklion. It reads "I hope for nothing. I fear nothing. I am free."

In 1945, he became the leader of a small party on the non-communist left, and entered the Greek government as Minister without Portfolio. He resigned this post the following year. In 1946, The Society of Greek Writers recommended that Kazantzakis and Angelos Sikelianos be awarded the Nobel Prize for Literature. In 1957, he lost the Prize to Albert Camus by one vote. Camus later said that Kazantzakis deserved the honour "a hundred times more" than himself[citation needed]. In total Kazantzakis was nominated in nine different years.[1] Late in 1957, even though suffering from leukemia, he set out on one last trip to China and Japan. Falling ill on his return flight, he was transferred to Freiburg, Germany, where he died. He is buried on the wall surrounding the city of Heraklion near the Chania Gate, because the Orthodox Church ruled out his being buried in a cemetery. His epitaph reads "I hope for nothing. I fear nothing. I am free." (Δεν ελπίζω τίποτα. Δε φοβἀμαι τίποτα. Είμαι λέφτερος.)

The 50th anniversary of the death of Nikos Kazantzakis was selected as main motif for a high value euro collectors' coin; the €10 Greek Nikos Kazantzakis commemorative coin, minted in 2007. His image is on the obverse of the coin, while the reverse carries the National Emblem of Greece with his signature.

His first work was the 1906 narrative Serpent and Lily (Όφις και Κρίνο), which he signed with the pen name Karma Nirvami. In 1909, Kazantzakis wrote a one-act play titled Comedy, which remarkably resonates existential themes that become prevalent much later in Post-World War II Europe by writers like Sartre and Camus. In 1910, after his studies in Paris, he wrote a tragedy, "The Master Builder" (Ο Πρωτομάστορας), based on a popular Greek folkloric myth. Kazantzakis considered his huge epic poem (33,333 verses long) The Odyssey: A Modern Sequel to be his most important work. Begun in 1924, he rewrote it seven times before publishing it in 1938. According to another Greek author, Pantelis Prevelakis, "it has been a superhuman effort to record his immense spiritual experience." Following the structure of Homer's Odyssey, it is divided into 24 rhapsodies.

Starting in his youth, Kazantzakis was spiritually restless. Tortured by metaphysical and existential concerns, he sought relief in knowledge and travel, contact with a diverse set of people, in every kind of experience. The influence of Friedrich Nietzsche on his work is evident, especially Nietzsche's atheism and sympathy for the superman (Übermensch) concept. However, he was also haunted by spiritual concerns. To attain a union with God, Kazantzakis entered a monastery for six months. In 1927 Kazantzakis published in Greek his "Spiritual Exercises" (Greek: "Ασκητική"), which he had composed in Berlin in 1923. The book was translated into English and published in 1960 with the title The Saviors of God.

The figure of Jesus was ever-present in his thoughts, from his youth to his last years. The Christ of The Last Temptation of Christ shares Katzantzakis' anguished metaphysical and existential concerns, seeking answers to haunting questions and often torn between his sense of duty and mission, on one side, and his own human needs to enjoy life, to love and to be loved, and to have a family. A tragic figure who at the end sacrifices his own human hopes for a wider cause, Kazantzakis' Christ is not an infallible, passionless deity but rather a passionate and emotional human being who has been assigned a mission, with a meaning that he is struggling to understand and that often requires him to face his conscience and his emotions, and ultimately to sacrifice his own life for its fulfilment. He is subject to doubts, fears and even guilt. In the end he is the Son of Man, a man whose internal struggle represents that of humanity.

Many Orthodox Church clergy condemned Kazantzakis' work and a campaign was started to excommunicate him. His reply was: "You gave me a curse, Holy fathers, I give you a blessing: may your conscience be as clear as mine and may you be as moral and religious as I" (Greek: "Μου δώσατε μια κατάρα, Άγιοι πατέρες, σας δίνω κι εγώ μια ευχή: Σας εύχομαι να ‘ναι η συνείδηση σας τόσο καθαρή, όσο είναι η δική μου και να ‘στε τόσο ηθικοί και θρήσκοι όσο είμαι εγώ").[citation needed] The excommunication was rejected by the top leadership of the Orthodox Church but emblematic of persistent disapprobation from many Christian authorities for his political and religious views.[2]

In Kazantzakis' day, the international market for material published in modern Greek was quite small. Kazantzakis also wrote in colloquial Demotic Greek, with traces of Cretan dialect, which made his writings all the more controversial in conservative literary circles at home. Translations of his books into other European languages did not appear until his old age. Hence he found it difficult to earn a living by writing, which led him to write a great deal, including a large number of translations from French, German, and English, and curiosities such as French fiction and Greek primary school texts, mainly because he needed the money. Some of this "popular" writing was nevertheless distinguished, such as his books based on his extensive travels, which appeared in the series "Travelling" (Ταξιδεύοντας) which he founded. These books on Greece, Italy, Egypt, Sinai, Cyprus, Spain, Russia, Japan, China, and England were masterpieces of Greek travel literature. 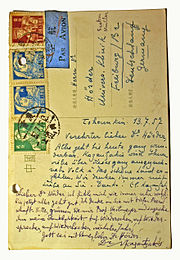 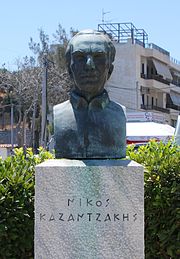 Translations of The Odyssey: A Modern Sequel, in whole or in part