Nina Foch /niːnə.fɑːʃ/ (born Nina Consuelo Maud Fock; April 20, 1924 – December 5, 2008)[2] was a Dutch-born American actress of film, stage, and television. After signing a contract with Columbia Pictures at age nineteen, the tall, blonde Foch became a regular in the studio's horror pictures and film noirs before establishing herself as a leading lady in the mid-1940s through the 1950s, often playing roles as cool, aloof sophisticates.[3] Her career spanned six decades, consisting of over fifty feature films and over one hundred television appearances.

She is perhaps best known for her roles in An American in Paris (1951); Robert Wise's Executive Suite (1954), which earned her an Academy Award nomination for Best Supporting Actress; Cecil B. DeMille's The Ten Commandments (1956); and Stanley Kubrick's Spartacus (1960).

Foch also worked prominently in television, starring in a multitude of television series from 1951 until 2007. In addition to acting, Foch taught drama at the American Film Institute and at the University of Southern California's School of Cinematic Arts, where she was a faculty member for over forty years until her death in 2008.[4]

Nina Foch was born Nina Consuelo Maud Fock[5] in Leiden, Netherlands to American actress and singer Consuelo Flowerton and Dutch classical music conductor Dirk Fock. After her mother and father divorced when Foch was a toddler, she went with her mother to the United States, settling in New York City.[6][7] As Foch grew up in New York, her mother encouraged her artistic talents; Foch learned piano and enjoyed art but was more interested in acting.[1] Foch attended the American Academy of Dramatic Arts, and also studied method acting under Lee Strasberg and Stella Adler.[2]

After signing a contract with Columbia Pictures at age nineteen, Foch made her feature film debut in the studio's horror picture The Return of the Vampire (1943) with Bela Lugosi, subsequently appearing in Columbia's Cry of the Werewolf the next year. This was followed with a role in the biopic A Song to Remember (1945), the drama I Love a Mystery (1945); as well as a string of film noirs, including Escape in the Fog, My Name is Julia Ross (1945), Johnny O'Clock (1947), The Dark Past (1948), The Undercover Man (1948), and Johnny Allegro (1949). During this time, she was also a regular in John Houseman's CBS Playhouse 90 television series. 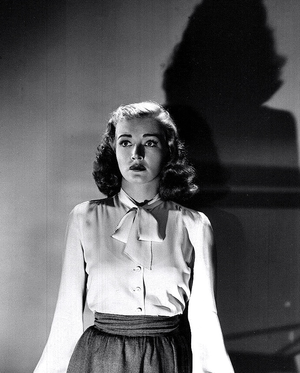 In 1951, Foch appeared with Gene Kelly in the musical An American in Paris, which was awarded the Best Picture Oscar that year. Foch appeared in Scaramouche (1952) as Marie Antoinette, and in Cecil B. DeMille's The Ten Commandments (1956) as Bithiah, the Pharaoh's daughter who finds the infant Moses in the bulrushes, adopts him as her son, and joins him and the Hebrews in their Exodus from Egypt. In 1957, Foch was honored by the Maryland State Council of the American Jewish Congress with a special award for her performance in The Ten Commandments.[8]

Foch received a nomination for the Academy Award for Best Supporting Actress for her role in the boardroom drama Executive Suite (1954), starring William Holden, Fredric March and Barbara Stanwyck. In Spartacus (1960), starring Kirk Douglas and Laurence Olivier, she played a woman who chooses gladiators to fight to the death in the ring, simply for her entertainment. In 1961, she guest starred in the NBC series about the family divisions from American Civil War entitled The Americans. In 1963, she appeared on the NBC game show Your First Impression. In 1964, she played the title role in the episode "Maggie, Queen of the Jungle" of Craig Stevens's short-lived CBS drama series, Mr. Broadway.

Foch was cast as Eva Frazier in the Outer Limits episode "The Borderland". She appeared in an episode of Gunsmoke as the widowed matriarch of a lawless town, and played in an episode on Combat! titled episode "The Casket". She was also cast as the first murder victim of the Columbo mystery series starring Peter Falk, appearing in the pilot movie, Prescription: Murder (1968), with Gene Barry as her husband, a homicidal psychiatrist. In the early 1970s, she guest starred on NBC's The Brian Keith Show. In 1975, Foch appeared in the film Mahogany, starring Diana Ross.

Later in her career, Foch appeared in War and Remembrance (1988) as the seemingly-nice librarian who soon advises Jane Seymour's character that the best place for her and her uncle would be the un-aptly named "Paradise Ghetto". She also appeared as 'Frannie Halcyon' in the TV miniseries Tales of the City (1993). Another notable TV role was as the OverseerP Commander (or "Kleezantzun") in the first of the Alien Nation TV movies, Alien Nation: Dark Horizon (1994).

Foch taught "Directing the Actor" classes at the USC School of Cinematic Arts, classes she had taught since the 1960s up to her death. She also worked as an independent script-breakdown consultant for many prominent Hollywood directors. For her contributions to film and television, Foch has stars on the Hollywood Walk of Fame, located at 6300 Hollywood Boulevard, and 7000 Hollywood Boulevard.[9]

Foch lived in Beverly Hills, California, for 40 years and married three times. Her first marriage was to James Lipton, future host of Inside the Actors Studio. She married her second husband, Dennis de Brito, in 1959; and the couple had one child before divorcing in 1963. Her third and last marriage was to Michael Dewell in 1967. The couple divorced in 1993.

Foch died on December 5, 2008, at the Ronald Reagan UCLA Medical Center. Her only son, Dirk de Brito, told the Los Angeles Times that she died of complications from the blood disorder myelodysplasia. She had become ill the day before, while teaching at the University of Southern California's School of Cinematic Arts.[10]