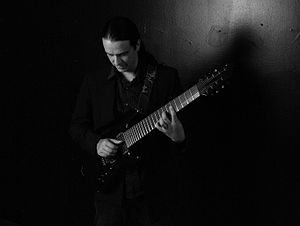 A nine-string guitar is a guitar with nine strings instead of the commonly used six strings. Such guitars are not as common as the six-string variety[citation needed], but are used by guitarists to modify the sound or expand the range of their instrument by adding three strings[citation needed].

There are two common variations of the nine string guitar:

The first style is often employed with three pairs of coursed strings similar to a twelve-string guitar. Often the three wound strings are single and the three thin strings are doubled to six strings. This allows dry power chords on the upper three and a more spheric chorus sound when all strings are played. Some examples of this type of nine-string guitar are the Vox Mark IX and the Vox Phantom IX[citation needed].

A different and rarer version of coursing uses doubled courses on the three bass strings, and leaves the high strings single. This facilitates free bending during solos, and slide playing[citation needed]. Mick Abrahams of the band Jethro Tull used this configuration (in open tuning) on the This Was album, though he achieved it by removing three of the top strings from an EKO 12-string acoustic-electric guitar, since stock nine-string guitars didn't exist at the time (1969).[1] Some twenty years later, former Rollins Band guitarist Chris Haskett had a custom Paul Reed Smith nine-string guitar made in this configuration. The inspiration for the design was supposedly the desire to capture the prominent tonalities of a 6/12 doubleneck on a single-neck guitar.[citation needed]

The second style expands on the seven- and eight-string guitar concept by adding either an additional lower- or higher-tuned string. Tuning the highest string to an A4 or higher can be accomplished with a shorter scale length and/or a thinner string such as a .008 or .007[citation needed]. When a lower string is added, the tuning becomes C#, F#, B, E, A, D, G, B, E.

Extended range nine-string guitars will often have a multi-scale fingerboard design where the bass strings will be longer than the treble strings, which helps with proper intonation of the lower strings, improves string tension balance across the strings, improves harmonic overtones, overtone series, and inharmonicity[citation needed].

Mississippi blues singer and guitarist Big Joe Williams spent most of his career playing nine-string guitars he had adapted himself from six-string instruments, with the first and second strings doubled in unison and the fourth doubled in octaves.[2] His grave marker reads "King of the Nine-String guitar".[3]

Justin Lowe and Trent Hafdahl of After The Burial also used 9-string Ibanez Prestige guitars on their Wolves Within album in 2013.

Mick Gordon is using a Schecter 9-string for the Doom soundtrack.[4]