The Ninth Crusade, which is sometimes grouped with the Eighth Crusade, is commonly considered to be the last major medieval Crusade to the Holy Land. It took place in 1271–1272.

Louis IX of France's failure to capture Tunis in the Eighth Crusade led Henry III of England's son Edward to sail to Acre in what is known as the Ninth Crusade. The Ninth Crusade saw several impressive victories for Edward over Baibars. Ultimately the Crusade did not so much fail as withdraw, since Edward had pressing concerns at home and felt unable to resolve the internal conflicts within the remnant Outremer territories. It is arguable that the Crusading spirit was nearly "extinct," by this period as well.[2] It also foreshadowed the imminent collapse of the last remaining crusader strongholds along the Mediterranean coast.

Following the Mamluk victory over the Mongols in 1260 at the Battle of Ain Jalut by Qutuz and his general Baibars, Qutuz was assassinated, leaving Baibars to claim the sultanate for himself. As Sultan, Baibars proceeded to attack the Christian crusaders at Arsuf, Athlith, Haifa, Safad, Jaffa, Ascalon, and Caesarea. As the Crusader fortress cities fell one by one, the Christians sought help from Europe, but assistance was slow in coming.

In 1268 Baibars captured Antioch, thereby destroying the last remnant of the Principality of Antioch, securing the Mamluk northern front and threatening the small Crusader County of Tripoli.

Louis IX of France, having already organized a large crusader army with the intent of attacking Egypt, was diverted instead to Tunis, where Louis himself died in 1270. Prince Edward of England arrived in Tunis too late to contribute to the remainder of the crusade in Tunis. Instead, he continued on his way to the Holy Land to assist Bohemund VI, Prince of Antioch and Count of Tripoli, against the Mamluk threat to Tripoli and the remnant of the Kingdom of Jerusalem. On May 9, 1271, Edward finally arrived at Acre.[3] He brought a small but not insignificant contingent of no more than 1,000 men, including 225 knights.[4]

Crusader operations in the Holy Land

It was decided that Edward, along with Louis' brother Charles of Anjou, would take their forces onward to Acre, capital of the remnant of the Kingdom of Jerusalem and the final objective of Baibars' campaign. The army of Edward and Charles arrived in 1271, just as Baibars was besieging Tripoli, which as the last remaining territory of the County of Tripoli was full of tens of thousands of Christian refugees. Edward arrived at Acre while it was still under siege. His arrival caused Baibars to change his plans and turn away from Acre.[5]

The forces under Edward's command were much too small to take on the Mamluks in a straight battle, being unable to even stop the Mamluks from seizing the nearby Teutonic Montfort Castle. They settled for launching a series of raids (described by some modern writers as "military promenades").[6] After capturing Nazareth by storm and putting its inhabitants to the sword,[7] Edward raided St Georges-de-Lebeyne, but accomplished little other than burning some houses and crops, on top of losing a few men to the heat.

Later, the arrival of additional forces from England and Hugh III of Cyprus, under the command of Edward's younger brother Edmund, emboldened Edward. He launched a larger raid with the support of the Templar, Hospitaller, and Teutonic Knights on the town of Qaqun. The Crusaders surprised a large force of Turcomans (mostly itinerant herdsmen), reportedly killing 1,500 of them and taking 5,000 animals as booty. These Turcomans were likely relatively new additions to Baibars' army, given weapons, horses, titles, and lands in return for military service after the Turkmen migrations following the Mongol invasions.[8] Muslim sources list one emir as killed and one as wounded during this raid. On top of that, the Muslim commander of the castle was forced to abandon his command. However, Edward did not take the castle itself, and retreated before Baibars could respond in kind (he was with his main army in Aleppo at the time, guarding against the Mongol raid).[9]

In December of 1271, Edward and his troops saw some action when they repelled an attack by Baibars on the city of Acre.[10] Baibars eventually abandoned his siege of Tripoli, but the exact reason is not known. Contemporary accounts state that Edward's attacks on his Baibars' interior lines forced him to abandon the siege. Some modern observers reject this interpretation, saying he instead abandoned it to avoid overcommitting himself in one direction due to a lack of intelligence on the Crusaders' true capabilities.[11][12]

As soon as Edward arrived in Acre, he made some attempts to form a Franco-Mongol alliance, sending an embassy to the Mongol ruler of Persia Abagha, an enemy of the Muslims. The embassy was led by Reginald Rossel, Godefroi of Waus and John of Parker, and its mission was to obtain military support from the Mongols.[13] In an answer dated 4 September 1271, Abagha agreed on cooperation and asked on what date the concerted attack on the Mamluks should take place.[14]

At the end of October 1271, a Mongol army arrived in Syria. However Abagha, occupied by other conflicts in Turkestan could only send 10,000 horsemen under general Samagar, a force made up of the occupation army in Seljuk Anatolia and auxiliary Seljukid troops. Despite the relatively small force though, their arrival still triggered an exodus of Muslim populations (who remembered the previous campaigns of Kitbuqa) as far south as Cairo. The Mongols defeated the Turcoman troops that protected Aleppo, and raided southwards, sending the other garrisons fleeing for Hama, and devastating the lands down to Apamea. But the Mongols did not stay, and when the Mamluk leader Baibars mounted a counter-offensive from Egypt on 12 November the Mongols had already retreated beyond the Euphrates, laden with booty.[15][16] 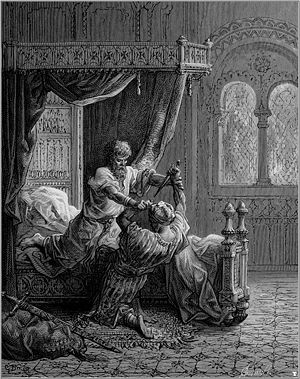 Edward I kills his attempted assassin.

In the interim, Baibars came to suspect there would be a combined land-sea attack on Egypt. Feeling his position sufficiently threatened, he endeavoured to head off such a maneuver by building a fleet. Having finished construction of the fleet, rather than attack the Crusader army directly, Baibars attempted to land on Cyprus in 1271, hoping to draw Hugh III of Cyprus (the nominal King of Jerusalem) and his fleet out of Acre, with the objective of conquering the island and leaving Edward and the crusader army isolated in the Holy Land. He disguised 17 war galleys as Christian vessels and attacked Limassol. However, in the ensuing naval campaign the fleet was destroyed off the coast of Limassol and Baibars' armies were forced back.[17][18]

End of the Crusade

Following this victory, Edward realized that to create a force capable of retaking Jerusalem it would be necessary to end the internal unrest within the Christian state, and so he mediated between Hugh and his unenthusiastic knights from the Ibelin family of Cyprus. In parallel to the mediation, Prince Edward and King Hugh began negotiating a truce with Sultan Baibars; a 10-year, 10 month and 10 day agreement was reached in May 1272, at Caesarea. Almost immediately Prince Edmund departed for England, while Edward remained to see if the treaty would hold. The following month, an attempt to assassinate Edward was made. Several versions of who sent the assassin exist. According to different versions, assassin was sent by the emir of Ramlah or by Baibars. Some legends also say that the assassin was sent by the Rashid ad-Din Sinan, also known as the Old Man of the Mountain, however he had already died in 1192, long before the Ninth Crusade. Edward killed the assassin but received a festering wound from a poisoned dagger in the process, further delaying Edward's own departure.[19] In September 1272, Edward departed Acre for Sicily and, while recuperating on the island, he first received news of the death of his son John, and then a few months later news of the death of his father. In 1273 Edward started his homeward journey via Italy, Gascony and Paris. Edward finally reached England in the middle of 1274, and was crowned King of England on 19 August 1274. 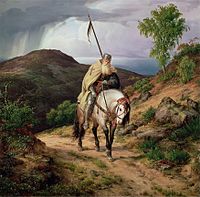 Romantic portrayal of the "Last Crusader". Increasing Muslim victories and Christian defeats led to the end of the Crusades.

Edward had been accompanied by Theobald Visconti, who became Pope Gregory X in 1271. Gregory called for a new crusade at the Council of Lyons in 1274, but nothing came of this. Meanwhile, new fissures arose within the Christian states when Charles of Anjou took advantage of a dispute between Hugh III, the Knights Templar, and the Venetians in order to bring the remaining Christian state under his control. Having bought Mary of Antioch's claims to the Kingdom of Jerusalem, he attacked Hugh III, causing a civil war within the rump kingdom. In 1277, Roger of San Severino captured Acre for Charles.

Although the internecine war within the crusaders' ranks was debilitating, it provided the opportunity for a single commander to take control of the crusade in the person of Charles. However, this hope was dashed when Venice suggested a crusade be called not against the Mamluks but against Constantinople, where Michael VIII had recently re-established the Byzantine Empire and driven out the Venetians. Pope Gregory would not have supported such an attack, but in 1281 Pope Martin IV assented to it; the ensuing fiasco helped lead to the Sicilian Vespers on 31 March 1282, instigated by Michael VIII, and Charles was forced to return home. This was the last expedition launched against the Byzantines in Europe or the Muslims in the Holy Land.

The remaining nine years saw an increase in demands from the Mamluks, including tribute, as well as increased persecution of pilgrims, all in contravention of the truce. In 1289, Sultan Qalawun gathered a large army and invested the remnants of the county of Tripoli, ultimately laying siege to the capital and taking it after a bloody assault. The attack on Tripoli however was particularly devastating to the Mamluks as the Christian resistance reached fanatical proportions and Qalawun lost his eldest and most able son in the campaign. He waited another two years to regather his strength.

In 1275, Abaqa sent a messenger to Edward with a letter. Abaqa requested that Edward mobilize for another Crusade, saying he could offer more help this time. Edward wrote back the same year, thanking Abaqa for his help in the Ninth Crusade while also noting his affection for Christianity. He said he did not know when there would be another Crusade, but was eager to get back to the Holy Land, and would inform Abaqa if the Pope declared another. The letter was almost certainly a formality, as Edward made no preparations for another Crusade. In 1276, another envoy was sent to Edward with the same message, with an additional message of apology for not effectively intervening in 1271.[20]

In 1291 a group of pilgrims from Acre came under attack and in retaliation killed nineteen Muslim merchants in a Syrian caravan.[citation needed] Qalawun demanded they pay an extraordinary amount in compensation. When no reply came, the Sultan used it as a pretext to besiege Acre and finish off the last independent Crusader state occupying the Holy Land. Qalawun died during the siege,[citation needed] leaving Khalil, the sole surviving member of his family, as Mamluk Sultan. With Acre seized, the Crusader States ceased to exist. The center of power of the Crusaders was moved northwards to Tortosa and eventually offshore to Cyprus. In 1299, a Mongol army led by Ghazan Khan led a series of successful raids against the Mamluks in an area northeast of Homs to as far south as Gaza. He finally withdrew from Syria in 1300. The Mongols and Armenian Kingdom of Cilicia led another campaign to recapture Syria, but were soon defeated by the Mamluks at the Battle of Shaqhab in 1303. The last remaining foothold on the Holy Land, Ruad Island, was lost in 1302/1303. The period of the Crusades to the Holy Land was over, 208 years after the beginning of the First Crusade.