Nipissing University College was established in 1967 as an affiliate of Laurentian University in Sudbury,[1] and received its charter as an independent university in 1992.[1][2][4]

The university's roots go back to 1909, when the North Bay Normal School, a teacher training school, was established in the city. The school was renamed North Bay Teachers' College in 1953, and became Nipissing University College's faculty of education in 1967. After the university received an award in 2010, the Faculty of Education was renamed the Schulich School of Education.

The governance of Nipissing University was modelled on the provincial University of Toronto Act of 1906, which established a bicameral system of university government consisting of a senate (faculty), responsible for academic policy, and a board of governors (citizens) exercising exclusive control over financial policy and having formal authority in all other matters. The president, appointed by the board, was to provide a link between the two bodies and to perform institutional leadership.[4] Nipissing University has a strong emphasis on teacher education and nursing.

Selection for the BEd degree is based primarily on academic average and the faculty is one of Ontario's most competitive faculties of education. On December 14, 2001, the government of Ontario passed a bill revising the university's charter to permit it to grant graduate degrees.[5] Nipissing University has a joint B.Ed. program with Wilfrid Laurier University for the concurrent program. Nipissing University has one of the largest faculties of education in the province with 750-800 Bachelor of Education students consecutive, plus 150 from the joint program with Wilfrid Laurier University.[citation needed] On average the Faculty of Education receives over 7,000 applications and enrolls between 750-800 students for the Bachelor of Education program.[citation needed]

The university is also known for its portrayal in Lynn Johnston's comic strip For Better or For Worse, in which Elizabeth Patterson was a student in the education program. Johnston lives near North Bay in real life, although the Patterson family was depicted as living in a fictional community in Southern Ontario.[citation needed]

Nipissing University's Harris Learning Library, shared with Canadore College, opened on June 25, 2011. Although based at the North Bay Campus, the Harris Learning Library services are provided to students at campuses located in Bracebridge and Brantford, or studying on their own. The library is named in honour of former Ontario premier and North Bay Teachers' College alumnus Mike Harris.[citation needed]

The university comprises three faculties: the Schulich School of Education, the Faculty of Arts & Science and the Faculty of Applied and Professional Studies. Currently there are five full-time graduate programs: the Doctorate (Ph.D) in Education, the Master of Education, a Master of Arts in History, a Masters of Environmental Science/Studies and a Masters of Science in Mathematics. The Schulich School of Education features the iTeach Mobile Learning Program, which was established in 2001. The iTeach Program (http://www.nipissingu.ca/iTeach) is the first teacher preparation program in North America to fully integrate a mobile technology component across all instructional divisions (Primary-Junior-Intermediate-Senior) utilizing Apple computer technology MacBook devices (capable of running both Mac OSX & Windows). A major focus within the iTeach Program centres on equipping the pre-service teacher candidates with an expanded skill-set in the area of educational technology integration. Teacher-candidates explore the process of integrating digital resources & technology into their practice teaching experiences throughout the school year. The end result is a set of graduating teachers ready to enter the 21st Century classroom prepared to supplement and enhance their teaching practices using various forms of educational technology (e.g., iPad tablets, SMART Boards, digital document cameras, Personal Response Systems, Podcasting, digital presentations using Mac OS X Keynote & Microsoft PowerPoint, video production with iMovie, Wii-Mote Interactive Whiteboard systems, Ontario Ministry of Education licensed education software, etc.)

The Student Union represents the students at Nipissing University. They are members of the Canadian Federation of Students. Along with the Canadore Students' Representative Council, the Student Union is the joint owner and operator of the student centre at Canadore College.[7][8]

The student representatives, known as the NUSU Delegates, are members of the student population who represent different areas of study, campuses, and residences at the university. There are a total of 14 delegates. They represent students from sciences, humanities, social sciences, professional schools, the Muskoka campus, residences, faculty of education, graduate studies and part-time and mature students.[10]

The university is represented in Canadian Interuniversity Sport by the Nipissing Lakers.

In addition to Nipissing University's main campus in North Bay, a facility shared with Canadore College, the university also has two satellite campuses in Southern Ontario.

In August 1996, Nipissing University opened a satellite campus in Bracebridge, the heart of Muskoka. The campus offers students the opportunity to study full-time or part-time towards three different Arts and Science degrees; Child and Family Studies, Culture and the Arts or a 3-year liberal arts degree. Students can also opt to do more course work in a specific discipline, positioning themselves for further studies towards an Honours degree which may be completed at the North Bay campus. Class sizes are small. The campus provides access to special support programs, including—Career Counselling, Job Search, Academic Skills Programs, Peer Tutoring resources and individualized assistance for special needs students. Muskoka Campus applicants are also eligible for Nipissing University entrance scholarships and bursaries. In September 2008, the new Nipissing University Muskoka Campus opened its new facility on Wellington St right beside the old Centennial Centre( now the new Georgian College Facility) 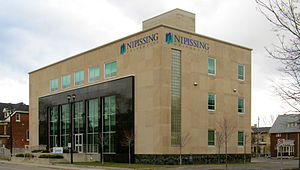 Brantford campus is a satellite campus of Nipissing University offering education courses for professional development and part-time Masters of Education courses. On November 16, 2014 the University announced that it would end its partnership in Brantford with Wilfrid Laurier University and wind down its operations in the city in the wake of changes to funding for education programs. As of November 10, 2015, there were 622 such students. No new students were admitted for the 2015-16 academic year and the partnership will officially end once the last cohort of current students completes the program in 2019.[12]