Nippon Television Network Corporation (日本テレビ放送網株式会社, Nippon Terebi Hōsōmō Kabushiki-gaisha?), doing business as Nippon TV, is a television network based in the Shiodome area of Minato, Tokyo, Japan and is controlled by the Yomiuri Shimbun publishing company. Broadcasting terrestrially across Japan, the network is commonly known as Nihon Terebi (日本テレビ?), contracted to Nittere (日テレ?), and abbreviated as "NTV" or "AX".

April 2005 : The Mona Lisa Viewing Room at the Louvre, Paris, was completed. The renovation was sponsored by NTV.[5]

July 2010 : The renovation of the exhibition area in the Louvre for Venus de Milo was also completed with the support of NTV.[6] 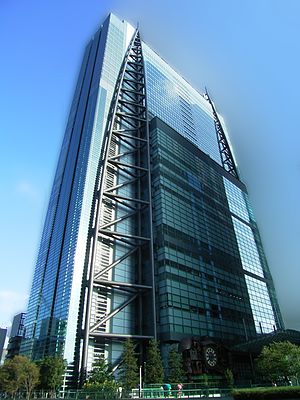 The company has intimate connections with Studio Ghibli, led by Hayao Miyazaki, and holds the exclusive rights to broadcast their motion pictures. It has also produced and broadcast popular anime series like Claymore, Death Note, Hajime no Ippo, as well as Detective Conan and Inuyasha (which are produced through its Osaka affiliate, Yomiuri TV). As of now, NTV is currently producing a second anime adaptation of Hunter × Hunter. NTV has also been broadcasting the yearly Lupin III TV specials since 1989, which they co-produce with TMS Entertainment. Nippon Television announced on February 8, 2011, that it would make the anime studio Madhouse its subsidiary after becoming the primary stockholder at about 85%, via a third-party allocation of shares for about 1 billion yen (about US$12 million).[8][9] On January 29, 2014, Nippon Television announced that it will purchase a 54.3% stake in Tatsunoko Production and adopt the studio as a subsidiary.[10][11]