With a history going back nearly 3,000 years, Nusaybin was ruled and settled by various groups. First mentioned as an Aramean settlement Naşibīna in 901 BCE and was captured by Assyria in 896 BCE, in the 4th and 5th centuries CE it was one of the great centers of Syriac scholarship, along with nearby Edessa.[5]

First mentioned in 901 BCE, Naşibīna was an Aramaean kingdom captured by the Assyrian king Adad-Nirari II in 896.[6] By 852 BCE, Naṣibina had been fully annexed to the Neo-Assyrian Empire and appeared in the Assyrian Eponym List as the seat of an Assyrian provincial governor named Shamash-Abua.[7] It remained part of the Assyrian Empire until its collapse in 608 BCE.[citation needed]

It was under Babylonian control until 536 BCE, when it fell to the Achamaenid Persians, and remained so until taken by Alexander the Great in 332 BCE. The Seleucids refounded the city as Antiochia Mygdonia (Greek: Ἀντιόχεια τῆς Μυγδονίας), mentioned for the first time in Polybius' description of the march of Antiochus III the Great against Molon (Polybius, V, 51). Greek historian Plutarch suggested that the city was populated by Spartan descendants. Around the 1st century CE, Nisibis (נציבין, Netzivin) was the home of Judah ben Bethera, who founded a famous yeshiva there.[8] 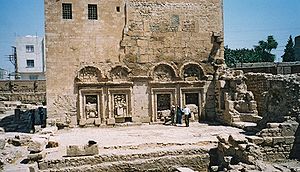 The newly excavated Church of Saint Jacob in Nisibis.

Like many other cities in the marches where Roman and Parthian powers confronted one another, Nisibis was often taken and retaken: it was captured by Lucullus after a long siege from the brother of Tigranes (Dio Cassius, xxxv, 6, 7); and captured again by Trajan in 115 AD, for which he gained the name of Parthicus (ibid., LXVIII, 23), then lost and regained against the Jews during the Kitos War. Lost in 194, it was again conquered by Septimius Severus, who made it his headquarters and re-established a colony there (ibid., LXXV, 23). The last battle between Rome and Parthia was fought in the vicinity of the city in 217.[9] With the fresh energy of the new Sassanid dynasty, Shapur I conquered Nisibis, was driven out, and returned in the 260s. In 298, by a treaty with Narseh, the province of Nisibis was acquired by the Roman Empire.

The Roman historian of the 4th century, Ammianus Marcellinus, gained his first practical experience of warfare as a young man at Nisibis under the master of the cavalry, Ursicinus. From 360 to 363, Nisibis was the camp of Legio I Parthica. Because of its strategic importance on the Persian border Nisibis was heavily fortified. Ammianus lovingly calls Nisibis the "impregnable city" (urbs inexpugnabilis) and "bulwark of the provinces" (murus provinciarum).

According to Al-Tabari some 12,000 Persians of good lineage from Istakhr, Isfahan and other regions settled at Nisibis in the 4th century, and their descendents were still there at the beginning of the 7th century.[10]

In 363 Nisibis was ceded back to the Persians after the defeat of Emperor Julian. Before that time the population of the town was forced by the Roman authorities to leave Nisibis and move to Amida. Emperor Jovian allowed them only three days for the evacuation. Historian Ammianus Marcellinus was again an eyewitness and condemns Emperor Jovian for giving up the fortified town without a fight. Marcellinus' point-of-view is certainly in line with contemporary Roman public opinion.

On the eve of World War I, Nusaybin had a small Armenian community of some 90 people, along with a large Jewish population numbering 600.[11]

As agreed upon by French and Turkish authorities after World War I, the border between Turkey and Syria would follow the line of the Baghdad Railway until Nusaybin, after which the border would follow the path of a contested Roman road leading to Cizre.[12]

Nusaybin was a place on the transit routes of Syrian Jews leaving the country after 1948. Upon reaching Turkey, after a route that took them through Aleppo and the Jazira sometimes with the help of Bedouin smugglers, most headed for Israel.[13] There was a big Jewish community in Nisbis since antiquity, many of them moved to Qamishli in the 20th century because of economic reason, there is a synagogue in Jerusalem that practices the rite of Nisbis and Qamishli.

Nusaybın made headlines in 2006 when villagers near Kuru uncovered a mass grave, suspected of belonging to Ottoman Armenians and Assyrians.[14] Swedish historian David Gaunt visited the site to investigate its origins, but left after finding evidence of tampering.[15][16] Gaunt, who has studied 150 massacres carried out in the summer of 1915 in Mardin, said that the Committee of Union and Progress's governor for Mardin, Halil Edip, had likely ordered the massacre on 14 June 1915, leaving 150 ethnic Armenians and 120 ethnic Assyrians dead. The settlement was then known as Dara (now Oğuz). Gaunt added that the death squad, named El-Hamşin (meaning "fifty men"), was headed by officer Refik Nizamettin Kaddur. The president of the Turkish Historical Society, Yusuf Halaçoğlu, said that the remains dated back to Roman times, although many people in the Turkish government openly deny the genocide even happened.[17]

Özgür Gündem says that the military and police have pressed the media not to report the discovery.[18]

The Turkish Interior Ministry looked into dissolving Nusaybin's city council in 2012 because the body sought to use Arabic, Armenian, Aramaic, and Kurdish on signposts in the town, in addition to Turkish.[19]

In November 2013, Nusaybin's mayor, Ayşe Gökkan, commenced a hunger strike to protest against the construction of a wall between Nusaybin and its neighboring city of Qamishli in Syria. Construction of the wall stopped as a result of this and other protests.[20]

On 13 November 2015, the town was placed under a curfew by the Turkish government, and Ali Atalan and Gülser Yıldırım, two elected members of the Grand National Assembly from the pro-Kurdish Peoples' Democratic Party (HDP), began a hunger strike in protest. Two civilians and ten PKK fighters were killed by security forces.[21]

Nisibis (Syriac: ܢܨܝܒܝܢ‎, Nṣibin, later Syriac ܨܘܒܐ, Ṣōbā) had an Assyrian Christian bishop from 300, founded by Babu (died 309). War was begun again by Shapur II in 337, who besieged the city in 338, 346 and 350, when Jacob (James) of Nisibis, Babu's successor, was its bishop. Nisibis was the home of Ephrem the Syrian, who remained until its surrender to the Persians by Roman Emperor Jovian in 363. 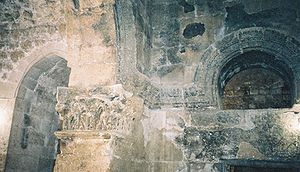 The interior of the Church of Saint Jacob in Nisibis.

Later, the bishop of Nisibis was the Metropolitan Archbishop of the Ecclesiastic province of Bit-Arbaye. In 410 it had six suffragan sees and as early as the middle of the 5th century was the most important episcopal see of the Church of the East after Seleucia-Ctesiphon, and many of its Nestorian, Assyrian Church of the East or Jacobite bishops were renowned for their writings: Barsumas, Osee, Narses, Jesusyab and Ebed-Jesus.

Established in the 18th century as Titular Archiepiscopal see of Nisibis (informally Nisibis of the Romans).

It is vacant since decades, having had the following incumbents, all of the (intermediary) archiepiscopal rank :

Established as Titular Archiepiscopal see of Nisibis (informally Nisibis of the Armenians) in 1910?.

It was suppressed in 1933, having had a single incumbent, of the (intermediary) archiepiscopal rank :

Established as Titular Archiepiscopal see of Nisibis (informally Nisibis of the Chaldeans) in the late 19th century, suppressed in 1927, restored in 1970.

It has had the following incumbents, all of the (intermediary) archiepiscopal rank :

Established as Titular Archiepiscopal see of Nisibis (informally Nisibis of the Maronites) in 1960. It is vacant, having had a single incumbent of the (intermediary) archiepiscopal rank :

The first theological, philosophical and medical School of Nisibis, founded at the introduction of Christianity into the city by ethnic Assyrians of the Assyrian Church of the East,[23] was closed when the province was ceded to the Persians. Ephrem the Syrian, an Assyrian poet, commentator, preacher and defender of orthodoxy, joined the general exodus of Christians and reestablished the school on more securely Roman soil at Edessa. In the 5th century the school became a center of Nestorian Christianity, and was closed down by Archbishop Cyrus in 489; the expelled masters and pupils withdrew once more, back to Nisibis, under the care of Barsumas, who had been trained at Edessa, under the patronage of Narses, who established the statutes of the new school. Those that have been discovered and published belong to Osee, the successor of Barsumas in the See of Nisibis, and bear the date 496; they must be substantially the same as those of 489. In 590 they were again modified. The monastery school was under a superior called Rabban ("master"), a title also given to the instructors. The administration was confided to a majordomo, who was steward, prefect of discipline and librarian, but under the supervision of a council. Unlike the Jacobite schools, devoted chiefly to profane studies, the school of Nisibis was above all a school of theology. The two chief masters were the instructors in reading and in the interpretation of Holy Scripture, explained chiefly with the aid of Theodore of Mopsuestia. The free course of studies lasted three years, the students providing for their own support. During their sojourn at the university, masters and students led a monastic life under somewhat special conditions. The school had a tribunal and enjoyed the right of acquiring all sorts of property. Its rich library possessed a most beautiful collection of Nestorian works; from its remains Ebed-Jesus, Bishop of Nisibis in the 14th century, composed his celebrated catalogue of ecclesiastical writers. The disorders and dissensions, which arose in the sixth century in the school of Nisibis, favoured the development of its rivals, especially that of Seleucia; however, it did not really begin to decline until after the foundation of the School of Baghdad (832). Among its literary celebrities mention should be made of its founder Narses; Abraham, his nephew and successor; Abraham of Kashgar, the restorer of monastic life; John; Babai the Elder.

As a result of the Syrian civil war, the city's border with Syria (and more specifically the large Syrian city of Qamishli) has been closed, with claims that the cessation in cross-border trade and commuting has led to a 90% rise in unemployment in the city.[24]

Nusaybin is immediately north of the border with Syria, opposite the Syrian city of Al-Qamishli. The Jaghjagh River flows through both cities. The border between Nusaybin and Turkey is filled with land mines, with a total of some 600,000 having been placed between the countries in the 1950s as part of Turkey's efforts to protect NATO's southeastern edge.

Nusaybin has a semi-arid climate with extremely hot summers and cool winters. Rainfall is generally sparse.