The Nizam-ı Cedid or the Nizam-ı Cedit (meaning New Order) was a series of reforms carried out by the Ottoman Sultan Selim III during the late 18th and early 19th centuries in a drive to catch up militarily and politically with the Western Powers. Specific reforms included conscription, new taxes, new legal categories, and the promotion of a more territorially-based state structure achieved by more strictly defined regions and administrative centralization.[1] The term later came to refer to the new Nizam-ı Cedid Army established under the reform program.

Nizam and cedid are loanwords from Arabic in Turkish. The equivalent phrase in Arabic would be النظام الجديد, An-Niẓām Al-Jadīd. Instead, the adjective phrase is constructed using Persian rules, as is common in Ottoman Turkish. 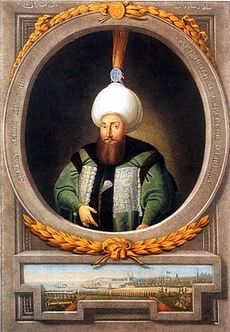 Ottoman Sultan Selim III, who carried out the reforms.

Napoleon's invasion of the Ottoman eyalets of Egypt and Syria (1798–1801) and the Napoleonic Wars (1803–1815) were influential in Sultan Selim III's decision to modernize the Ottoman military, which had become obsolete compared to the militaries in Western Europe in terms of organizational structure, weaponry technologies, and modern warfare strategies.

The Nizam-ı Cedid (New Order) reforms of Selim III (reigned 1789–1807) were further improved by his successors Mahmud II (reigned 1808–1839) and Abdülmecid I (reigned 1839–1861); eventually culminating in the Tanzimat (Reorganization) reforms which thoroughly modernized the Ottoman State.

Between 1829 and 1855 the new army was constantly being improved under the sight of military advisors. The troops of the Nizam-ı Cedid corps were equipped with European-style uniforms and educated in European military strategy. Sultan Abdülmecid I even claimed that, if the campaign of 1829 against the Russians was fought over again in 1855, the result would be very different.